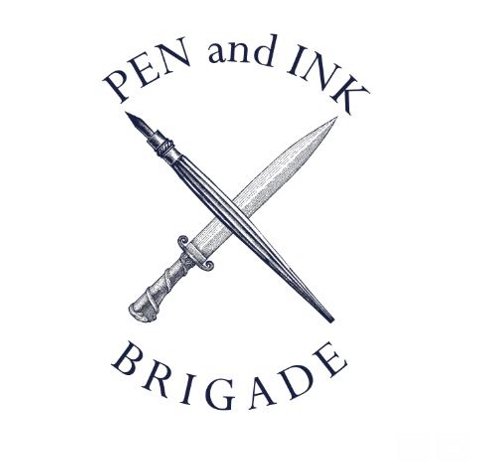 After the presidential election in 2016, a group of women illustrators—those who work in children’s literature (many of them artists who write and illustrate picture books), as well as editorial illustration—joined forces. They are the Pen and Ink Brigade, whose brand-new mission involves a project aimed to turn the tide at the midterm elections in November with, as they put it, “the most effective weapon we can wield—our art.”

One of the founders of this group, author-illustrator Carin Berger, talked to me via email about the group; their newest project, the Blue Wave Collection; and how you can contribute—if, like them, you want to raise your voice and make change this November.

Jules: Tell me when and why the Pen and Ink Brigade formed.

Carin: Several years ago, a group of talented and like-minded women illustrators started meeting for art outings and shop talk. Some of us did work on the 2016 campaigns, canvassing and helping to get out the vote, but after the 2016 election, there was a shift in our focus. We joined together, made signs, and marched in the 2017 and 2018 Women's Marches.

I was inspired by everyone's creativity and enthusiasm and started to think about how we could use our collective strength and galvanize our outrage to make a difference. The Blue Wave Project is the result. It is a group effort to raise money to help get out the vote for the critical midterm elections. The project came together in a few short weeks, and initially 15 illustrators each created an incredible, original Blue Wave. The waves are designed to all fit together to create a blue tsunami and to turn the tide. The goal was to both sell the original pieces of art and also to use the art on products to sell.

The Blue Wave Project has gone swimmingly [pun intended!], and in just over a week we sold eight pieces of original art and raised over $2,500.00. In fact, it went so well, that we have brought in more women illustrators to make waves — and we have now grown to a robust 22 artists. We plan to grow and continue our efforts for the 2020 elections.

Jules: Who were some of your founding members, and which illustrators were recently added?

Carin: The Pen and Ink Brigade has grown organically. We are an open collective of women illustrators, who participate as able. Many of us make picture books, but others do graphic design, animation, editorial illustration, and fine art. Some of our original members include, along with myself: Selina Alko, Kristen Balouch, Juliette Borda, Maria Carluccio, Andrea D'Aquino, Yvetta Fedorova, Jessie Hartland, Catherine Lazure, Giselle Potter, and Ellen Weinstein. Since then, we have added Melinda Beck, You Byun, Kimberly Hall, Melissa Iwai, Carrie Leeb, Tao Nyeu, Thorina Rose, Blair Thornley, Gina Triplett, Susy Pilgrim Waters, and Nina Crews.

Jules: How do you, personally as an artist, deal with the despair and disheartened moments that many of us feel under the current administration?

Carin: It has truly been a disorienting time.

Creating is an act of optimism and openness, and certainly it is hard to channel those feelings in these dark and divisive times. Many many of my fellow authors and illustrators are struggling with their work in the face of daily assaults on the inclusive and kind world that we believe in. It can make our work seem frivolous. But actually I have come to understand that picture books are a way of reaching out to families and children and of helping to shape our future. And while we need to actively work to create the world that we want, we also need to do what we do best – make picture books.

On a more personal level, friendship, community, and connection are themes that I explore in many of my books. In some books, like The Little Yellow Leaf, Forever Friends, and A Perfect Day, these subjects are handled more implicitly. In my most recent book, All of Us, I address these topics explicitly. I wrote All of Us days after the election, when I was in Germany, the place that my family had been forced to flee eighty years earlier, because of the racism and hatred that was sweeping that country. It was chilling to be there as upheaval, hate, and divisiveness was unleashed in the United States. I wrote All of Us as a declaration of the timeless power of diversity, community, and love. I wrote it for all of the families and friends that have been under siege, for all of us that, in one way or another, have felt uncertain and afraid and alone. I wrote it because I, too, had a deep need for hope and affirmation and a reminder that we are stronger together—and that love, ultimately, wins.

Jules: Tell me more about the Pen and Ink Brigade’s post-November plans.

Carin: The Pen and Ink Brigade Blue Wave Project has grown in wonderful and unexpected ways. The project will continue after the midterm elections in November. After all, there is another rather important election coming up in 2020!

Many new women artists across the country have expressed interest in joining the project, so we are exploring different ways that we can expand what we are doing. We are in the process of partnering with a company to make additional products, including t-shirts with different wave designs. (The first design, Melinda Beck's wave, is available now!) The proceeds from this new phase will all go to Emily's List, an organization dedicated to getting more Democratic women elected in national, state, and local elections. As women, as creators, we know that we have a critical voice. It is up to us to turn the tide and make the world look more like the one we want to live in—kind, fact-based, and inclusive.

Jules: The opening of the Blue Wave Project is tonight in Brooklyn from 7 to 9 p.m., yes?

Carin: Yes! This election cycle has been like a marathon. It has tested all of our endurance. It is easy to feel disheartened and as if our efforts to effect change are insignificant. The opening will be an opportunity for like-minded people to gather together and to support and motivate each other, as we enter the final stretch before these critical midterm elections. There will be new original waves available to buy, as well as postcard sets. The entire evening will have a blue theme, because the show of the Pen and Ink Brigade's Blue Waves is happening in conjunction with Selina Alko's show of abstract paintings inspired by Joni Mitchell's album, Blue.

The Diana Kane Boutique and Gallery [229-B Fifth Avenue in Brooklyn) is the perfect venue for this, as Diana has long history of supporting political and feminist causes—and of showing artwork with a political focus.

We expect the night to be festive and supportive, as we work together to create a great blue wave on November 6th.