A Man That Came From Saturn 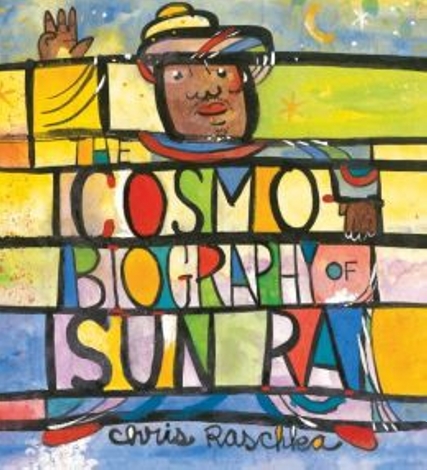 The title of Chris Raschka’s latest picture book, The Cosmobiography of Sun Ra: The Sound of Joy Is Enlightening, tells you two things. First, if you’re a music-lover, you’re in for a treat, especially given that delicious subtitle, and secondly, this isn’t your typical picture book biography. Rather, given that it’s a cosmobiography, you can tell that the subject matter—in this case, Sun Ra himself—is terrifically unconventional.

And then the book’s first page goes straight to showing you that you’re in very good hands with Raschka. He writes:

Sun Ra always said that he came from Saturn.

Now, you know and I know that this is silly. No one comes from Saturn.

If he did come from Saturn, it would explain so much.

Let’s say he did come from Saturn.

That right there is a very smart way to kick off this biography. It immediately sets the tone for the book, distinguishing Sun Ra as the unique personality that he was.

Raschka starts with Sun Ra’s “birth” in 1914. Remember, we are assuming he came straight from outer space, so he really lands on our planet and finds himself in Birmingham, Alabama. A musical “genius” as a child, Sun Ra, named Herman Blount by his parents, played piano by age 11 and also spent a lot of time reading—about philosophy in particular. (Rosicrucianism and Freemasonry were but two ways of thought that fascinated him.) One thing especially confused him, writes Raschka—that the people of Earth consistently sorted themselves by color (the “white variety” and “black variety”).

By the time he was finished with high school, he was a professional musician. Instead of fighting in World World II, he was labeled a conscientious objector. Eventually, he ended up in Chicago and formed the Arkestra, playing in groups with other musicians.

Raschka never drops the Saturn thread, writing that, as someone from outer space, Sun Ra was “afraid neither of electrons nor electricity” and was, therefore, one of the first musicians to use electric keyboards. He captures Sun Ra’s personality and abundant curiosity well, characterizing him as a man who rarely slept at night, but who spent his days exploring (napping in short bursts throughout the day, when necessary).

He continued to play “wild and free” music, the band members even creating their own clothing, and bouncing from New York to Philadelphia. The Arkestra eventually traveled the world—with Egypt being Sun Ra’s favorite destination. Raschka closes with his death in 1993 (rather, his return to Saturn), noting that before Sun Ra left, he was quoted as saying that it is music, not gravity, that holds people together.

Fans of Raschka know what gifts await, especially art-wise, when he writes and illustrates books about musicians (Charlie Parker Played Be Bop; Mysterious Thelonius). In this one, his vibrant brushstrokes communicate an energy perfectly matching the spirit of Sun Ra’s music and essence. It’s a throbbing pulse throughout the book, a heartbeat that sings with color, movement and predominantly horizontal lines. Some spreads are painted on sheet music, and the final painting on the spread about his leaving Earth is a wonder of shape and color.

A singular biography about a singular artist, it’s a fascinating story for readers of all ages and a tribute to joy for music-lovers of all stripes.

THE COSMOBIOGRAPHY OF SUN RA: THE SOUND OF JOY IS ENLIGHTENING. Copyright © 2014 by Chris Raschka. Reproduced by permission of the publisher, Candlewick Press, Somerville, MA.