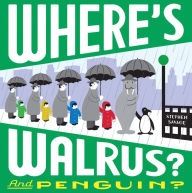 The Fall 2015 book season is nearly here, and in the realm of picture books it’s a time of many happy returns—that is, the opportunity to see again some beloved characters from previous publications.

Some of these characters are huger than others: the characters from Audrey and Don Wood’s classic The Napping House, published 31 years ago and a staple for multiple decades in children’s bedrooms and classrooms all over the country, return in early September in The Full Moon at the Napping House. Fans of Molly Bang’s 2000 Caldecott Honor winner, When Sophie Gets Angry—Really, Really Angry, will be happy to see that Sophie will be back in late September in When Sophie’s Feelings Are Really, Really Hurt, a book about both artistic expression and wounded feelings.

Speaking of award winners, we’ll also see Mike Curato’s spotted elephant Little Elliot return in October in Little Elliot, Big Family. Curato received the Society of Illustrator’s Founder’s Award last year for his picture book debut, Little Elliot, Big City. The 2015 Geisel Award winner, Anna Kang’s You Are (Not) Small, illustrated by Christopher Weyant, will be joined by the appealing slapstick adventure that is That’s (Not) Mine at the very beginning of September. And American readers will see the third book from French author-illustrator Benjamin Chaud that features Little Bear and Papa Bear, The Bear’s Surprise. The Bear’s Song received the Society of Illustrators’ Gold Medal in 2013 and was named one of Kirkus’ Best Books of 2013. It was followed by last year’s The Bear’s Sea Escape. Utterly charming, all three of Chaud’s stories.

Whew. And that’s not all. I’d like to focus now in a bit more detail on three of my favorites.

First up is Stephen Sav

age’s walrus character. Remember 2011’s Where’s Walrus? How could you forget it, right? Walrus is back in Where’s Walrus? And Penguin?, coming to shelves next month. Another wordless adventure, this time Walrus and a penguin friend escape the zoo. They explore the city in disguise, while the hapless zookeeper searches in vain. Just as with the first book, children will enjoy spotting the two creatures out in the city—they sit on a park bench, ride the subway, play on the baseball field, and more. Savage’s smooth, sleek design and uncluttered compositions entertain in this story that delights in the absurd. And bonus! This companion book has a lovely and romantic twist at its close, but I’ll leave that for you to discover yourself.

She’s back! Anna Hibiscus, that is. She’s the irrepressible protagonist of the award-winning chapter books I wrote about here at Kirkus back in 2011. The chapter books series is done (I assume), but the publisher, Kane Miller, has also brought some of Anna’s stories to readers in picture books. Anna is a girl living with her huge family in Africa. “Amazing Africa.” The whole loving family returns here in Double Trouble for Anna Hibiscus! to see the birth of Anna’s new twin brothers, whom she collectively calls “Double Trouble.” Anna feels slighted by her family, since newborns require so much attention. To be sure, we have a lot of picture books about this topic, but this one is special—because Anna’s family is. Her African father, her Canadian mother, her many cousins (Benz, Angel, Clarity, Chocolate), her aunties and uncles, and her beloved grandmother all eventually make time for Anna in the end, albeit after she throws a huge tantrum. There’s abundant warmth and love here in Atinuke’s story, and the illustrator, Lauren Tobia, nails Anna’s expressions and strong emotions.

And I’m saving my favorite for last: Toys Meet Snow, written by Emily Jenkins and illustrated by Paul O. Zelinsky. This one star

s the characters—Lumphy, Plastic, and Stingray—of Jenkins’ and Zelinsky’s Toys trilogy, a set of stories that began with the splendid Toys Go Out nearly 10 years ago. That’s right: they’re in a picture book now, much like Anna Hibiscus. And I couldn’t be happier. The story, similar to one that occurs in one of the chapter book trilogies (if I’m remembering correctly), involves the three characters heading out on a snowy day. Their adventure is funny and tender and sweet (but never saccharine), all at once. Zelinsky does some beautiful things with the book’s palette, particularly at the book’s close, and Jenkins’ writing is sharp and tight, just as it is in the chapter books. May they return another day in yet another picture book adventure.

Looks like Fall 2015 will be a great time to meet up with some old friends.