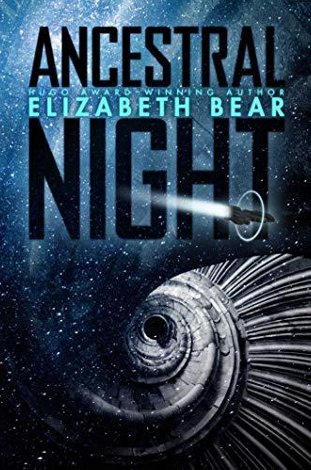 The science fiction and fantasy books coming out in March is quite impressive. There are books about parallel worlds, angry island spirits, gender segregation, lots of space operas and more. In fact, every kind of reader will find something intriguing in these speculative fiction releases...

WHAT IT'S ABOUT: A pair of space salvagers—Haimey, an engineer, and Connla, the pilot of their artificially intelligent ship—exploit the scenes of unsuccessful space voyages searching for valuable human and alien relics. When Haimey becomes infected on one particular excursion, she develops the ability to see the universe in a new way, thus making her a valuable and much-sought-after commodity to dangerous space pirates.

WHAT IT'S ABOUT: When nuclear war erupts in an alternate United States, two refugees, Hel and Vikram, escape to an alternate Earth—our world. Displaced and stuck in an unwelcoming land where their version of home never existed, Hel and Vikram try to get their lives back on track.

WHY YOU MIGHT LIKE IT: While there are many stories of parallel worlds, this one offers its own fresh and relevant take.

WHAT IT'S ABOUT: As humanity continues its journey across the universe, building its empire on the ruins of an alien civilization, they cannot escape the perils of humanity itself. For example, the addictive quest for power by a ruthless dictator, who used alien technology to obtain his position, prompts him to instigate an even more powerful race of aliens who do not agree with his methods.

WHY YOU MIGHT LIKE IT: We're eight novels into The Expanse series—and soon, four seasons into the television series adaptation—and it's as page-turning as ever.

WHAT IT'S ABOUT: Set in Belene, a fictional set of islands surrounded by an ocean full of malicious spirits, The Deepest Blue is the story of Mayara, who secretly possesses the ability to control the spirits. When her secret is discovered, she is sent to a deadly island of bloodthirsty nature spirits along with others possessing similar abilities. Whoever survives those trials earns the right to be heirs to the queen.

WHY YOU MIGHT LIKE IT: While set in the same world as Durst's Renthia novels, this fantasy stands on its own and makes a great entry point.

The Women's War by Jenna Glass

WHAT IT'S ABOUT: Set it a patriarchal society where men rule by magic, two women find themselves on the cusp of change. One is Alys, a widowed mother and the disinherited daughter of a king. The other is Ellin, who lives in a neighboring kingdom where she finds herself a designated survivor suddenly in charge. Both women are changed by a revolutionary new magic that only women can wield.

WHAT IT'S ABOUT: This paranoia-infused near-future thriller is set in a surveillance state, where the government see all. Following the death of his beloved wife, Remi takes a job in London as a cycle courier, delivering subversive documents "off the grid." After a driverless car attempts to run him over, Remi discovers coded messages that imply his wife is alive and that he can see her if he just joins the resistance movement.

The Light Brigade by Kameron Hurley

WHAT IT'S ABOUT: In the future, military troops will be teleported to the front by first being transported into light for a quick journey, then reassembled after the drop. The bad news: such a process leaves you forever changed, maybe even questioning reality. Dietz, a fresh infantry recruit, begins to experience drops that are out of sync with the rest of the platoon—and also reveal a decidedly different story about the Martian war. But Dietz cannot tell whether it a normal side-effect of transportation or a symptom of combat madness.

WHY YOU MIGHT LIKE IT: The Light Brigade offers readers a glimpse at the possible state of future warfare.

WHAT IT'S ABOUT: Mahit Dzmare is the newly-assigned ambassador of an independent mining station. Her predecessor, she learns after the fact, was killed in a highly-suspicious accident. While Mahit maneuvers to keep the station from being absorbed by the ever-encroaching reach of the Teixcalaanli Empire, she must also find out who is behind the murder and save herself from the same fate.

WHAT IT'S ABOUT: Gender segregation is taken to an extreme in this coming-of-age dystopian thriller. There exists in the forest two schools. One is attended by boys like J, who are trained in art, science, and athletics. The other is attended by girls like K, who also has a life that consists entirely of school and her classmates. None of them are aware that the opposite sex even exists. Then J meets K.

WHY YOU MIGHT LIKE IT: The author of Bird Box serves up another interesting premise with thoughtful implications.

The Bayern Agenda by Dan Moren

WHAT IT'S ABOUT: The Cold War set in space! When a covert operative for the Commonwealth of Independent Systems is taken out of action—but not before he received intel that antagonistic Illyrican Empire is courting the Bayern Corporation, a planet-sized bank—his undercover team is handed over to his ex-wife.

WHY YOU MIGHT LIKE IT: It's described as a "fast-paced and wisecracking thriller of spies and subterfuge." Count me in!

The Near Witch by V. E. Schwab

WHAT IT'S ABOUT: When children start disappearing from the town of Near, called away by the magical sound of the wind, mob mentality takes hold, pointing at a new stranger town, himself a boy. Lexi resists the urge to point fingers and instead relies on the town witches to help her rescue them.

WHY YOU MIGHT LIKE IT: If you missed Schwab's debut novel when it first appeared, now's your chance to get on board.

The Chaos Function by Jack Skillingstead

WHAT IT'S ABOUT: Olivia, a journalist reporting directly from the civil war front in Syria, loses her lover, an aid worker, after he follows her into danger. Then she stumbles on mysterious technology that is able to rewrite the past. Olivia brings him back, but the subsequent change also pushes the world toward the edge of nuclear and biological catastrophe.

WHY YOU MIGHT LIKE IT: It forces readers to ask the thought-provoking question: At what cost would you bring back a deceased loved one?

WHAT IT'S ABOUT: In the urban fantasy, the retro-town of Titanshade is home to a dying oil industry and a race of reclusive amphibians known as Squibs. When a Squib's proposed investment to save the town ends in the murder of a Squib diplomat, a human homicide detective is assigned to solve the case. Carter's task won't be easy; he's under enormous pressure to close the case as he deals with the city's elite, corrupt coworkers and falsified evidence.

The Rosewater Insurrection by Tade Thompson

WHAT IT'S ABOUT: In a near-future Nigeria, a subtle alien invasion is taking place. Wormwood, an alien entity, is expanding its influence on the town of Rosewater, though not everyone knows it. To save the human race, Aminat, a government agent (and lover of the protagonist from the previous book, Rosewater), must capture a woman who is key to stopping the slow invasion.

Here's some more short fiction for you to enjoy. Pro tip: Pick a title and keep it with you to read a story over lunch or while waiting in a line!

Sharp & Sugar Tooth: Women Up to No Good edited by Octavia Cade

Miranda in Milan by Katharine Duckett

Sooner or Later Everything Falls Into the Sea by Sarah Pinsker