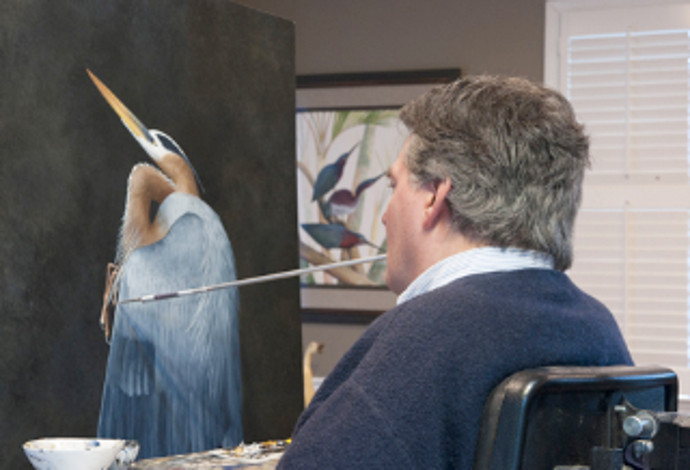 The first hint that Marcus Thomas’ Flight of the Mind: A Painter’s Journey Through Paralysis is unusual among self-published books comes from the pricing: The 12-by-12-inch linen-bound collection of Thomas’ paintings is available in three editions, which range from $95 to $450.

Thomas’ story, which accompanies the paintings in a narrative written by Leslee N. Johnson, is also out of the ordinary and renders the artwork even more compelling. Thomas has been a quadriplegic since he was injured in a skiing accident at age 26, and he creates his paintings, many of them invoking themes of flight, with a paintbrush he holds in his mouth.

“Monday to Friday, I’m always painting,” says Thomas, who has made his living as an artist for more than 25 years. With his wife, Annie Gahagan-Thomas, he travels across the country to sell his paintings at art shows. Several years ago, he decided it was time to bring the highlights of his career together in a single volume.

The result is Flight of the Mind, an elegant arrangement of paintings and words that captures one artist’s life in both images and narrative. Kirkus Reviews calls Thomas’ collection an “inspiring story on display alongside his inspired art” and notes that Flight of the Mind “will be right at home on many suburban coffee tables.”

Flight of the Mind is available through Amazon and on the artist’s own website, but Thomas has made the bulk of his sales by making one-on-one connections with his customers. “The best method for selling is direct selling,” he says, a lesson he draws from his years attending art shows. Over the years, he has built a substantial mailing list and used it to let fans and past customers know when his work became available as a book.

The personal experience of selling directly to people he meets is Thomas’ favorite part of self-publishing his work. “The people that have enjoyed our story and enjoyed the book—it’s a wonderful feeling,” he says. “Most shows, I’ll autograph, personalize, get to know the people who are buying the book.” His website features comments from more than a dozen readers who have written to Thomas about how his work has affected them.

One customer he got to know while selling his work at an art fair in his North Carolina hometown was actress Andie MacDowell, who wrote about meeting Thomas in Guideposts. MacDowell wrote that a painting of a hummingbird caught her attention: “Maybe that’s what captivated me about that painting, the idea that things weren’t the way they were supposed to be, yet the unexpectedness of it all was what made it beautiful,” she wrote. She stopped to talk to Annie Gahagan-Thomas and shared the couple’s story with the magazine.

Thomas gives his wife much of the credit for the book’s success. “It’s not possible without the help of my wife,” he says, and he uses the word “we” as much as “I” when he talks about his art and about the book. Gahagan-Thomas helps her husband manage daily life as a quadriplegic—before Thomas spoke about his work in a phone interview, Gahagan-Thomas had to set up his Bluetooth earpiece—and is also crucial to Thomas’ commercial success. “My wife has an incredible marketing mind,” Thomas says, and together, they make a career in the art world.

The pair spent nearly two years getting Flight of the Mind ready for publication. “We decided it was time to put it together,” Thomas says. “We wanted to do it one time and do it right.” In addition to preparing the images, that meant hiring writer Johnson to write the accompanying text.

In the end, the pieces came together the way Thomas wanted. “The flow of the pages, the text—it’s a lot of luck,” he says, but he is pleased with the finished product. “It’s quite humbling” but also “very rewarding” to see a quarter-century of his work bound together. The response from readers and reviewers makes it clear that Thomas is not the only one who finds Flight of the Mind a rewarding experience.

Thomas sees publishing his art in book form as a way to reach a wider audience than he does through the sale of individual paintings, and he is open to the possibility of bringing out a second volume. “We’d like to follow up this book,” he says. “Maybe in another five years, depending on how this book sells.”

Flight of the Mind took several years from conception to production, and Thomas has one key piece of advice for other artists who may want to publish their own work: Keep records. “A lot of artists just sell their work,” he says, without tracking the information that they will need to produce a retrospective or publish a collection. “There’s not a lot of documenting,” and then “they reach that point in their careers where they wish they had something to refer back to.” Thanks to the detailed archive of his own work that Thomas and Gahagan-Thomas have maintained, they were able to bring together the images he needed to produce the collection. He hopes other artists will do the same and also “store that body of work somewhere where it’s accessible,” he says. “Without some kind of history, it’s not possible.”

For now, Thomas continues to sell his book in person, traveling regularly to art shows, and through his website, though he is also looking into the possibility of working with bookstores. He continues to paint every day. He likes his symbolic paintings, he says, but does not claim a favorite from among his collection—at least, not yet. “I always say that my favorite is the one I haven’t done.”

Sarah Rettger is a writer and bookseller in Massachusetts.