Margaret Atwood Gets Her Close-Up (Again) 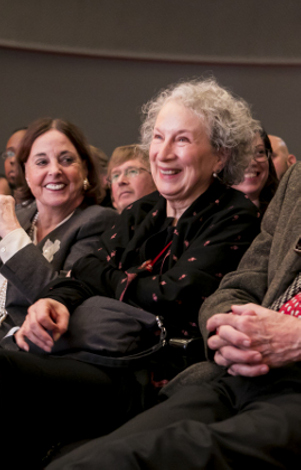 Margaret Atwood is having a moment. In March, she was given the Ivan Sandrof Lifetime Achievement Award by the National Book Critics Circle. In early April, she was profiled in the New Yorker, and in late April, a TV series based on her most famous novel, The Handmaid’s Tale, was streamed on Hulu. Meanwhile, The Handmaid’s Tale has shot back onto bestseller lists 31 years after its original U.S. publication. I recently read it for the first time since just after it came out and was amazed—not by its prescience, which wasn’t surprising at all, but by its perfect writing, its flashes of bone-dry humor, and the sheer pleasure it provides.

Curious, I went back to Kirkus’ original review and found an artifact that’s much more dated than Atwood’s novel. Here’s a description of the infamous “ceremony” in which the handmaid, Offred, is forced to have sex with the Commander—and if you haven’t read the book yet, consider this a glimpse of its world and then go read it right away: “Lying cradled by the body of the barren wife, being meanwhile serviced by the husband, Offred's ‘ceremony’ must be successful—if she does not want to join the ranks of the other disappeared....” I’m pretty sure “cradled” and “serviced” are among the last verbs a modern reviewer would think of applying to this scene.

The review concludes: “Atwood, to her credit, creates a chillingly specific, imaginable nightmare. The book is short on characterization—this is Atwood, never a warm writer, at her steeliest—and long on cynicism….But the scariness is visceral, a world that's like a dangerous and even fatal grid, an electrified fence. Tinny perhaps, but still a minutely rendered and impressively steady feminist vision of apocalypse.”  Not a bad description if you could take out that “tinny,” but the reviewer didn’t predict the power this novel would have. Let’s just hope it doesn’t start feeling any more accurate than it does right now.