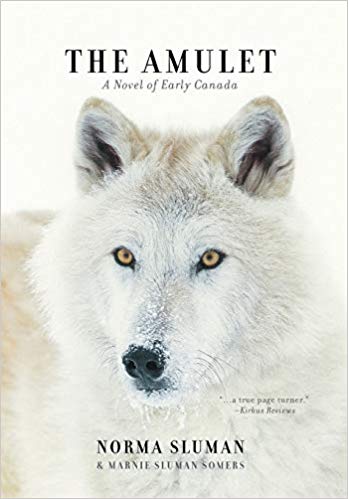 Marnie Sluman Somers fondly recalls playing on the library floor in their family’s home in Calgary, Canada, watching her mother, Norma Sluman, research her next novel. “She would go to libraries all over Alberta,” Somers says. “They didn’t have the internet back then….She would be horrified to see how easy it is today.” Although the research may be easier these days, Somers now has firsthand knowledge of the effort her mother invested in writing. She spent the last four years revising and independently publishing her mother’s published and unpublished works, including The Amulet, which debuts this year.

As Somers remembers, Sluman was considered a gifted writer from a young age, and her teachers encouraged her to pursue writing professionally. She married during World War II and moved from Toronto to Alberta to raise her family. She dedicated enough of her time to writing that she published two books—the award-winning Blackfoot Crossing in 1959 and Poundmaker in 1967. Both are historical novels about the lives of the Indigenous peoples of Alberta during the “Winning of the West” in the late 1800s.

Shortly before her death in 1993, Sluman asked her daughter to create a digital version of the manuscript for her third and final book, titled The Amulet. “It was something she worked on right up until she passed,” explains Somers. “I decided then that it was a pretty darn interesting story and that it should be told, but I was at a different stage of my life.” With family and work obligations, Somers unfortunately couldn’t finish the job before her mother died, and The Amulet was temporarily shelved.

“It was always nagging in the back of my mind,” Somers says. Four years ago, she dusted off the carbon copy manuscript and decided that she would finally revisit The Amulet. But after years of working as a writer and proofreader herself on a wide range of marketing, publicity, and professional campaigns, Somers couldn’t resist tinkering, tying up loose ends in the plot and modernizing some of the terminology to better highlight the spirit of her mother’s work—depicting the experiences of First Nations people.

“Some of the terminology used in the original manuscript, which were in common usage at the time, just didn’t fit in the modern vernacular for the voice of the narrator,” Somers says. With the help of an editor, she polished the plot and prose and balanced the novel’s meticulous historical accuracy with a contemporary sensibility. (For example, “band” is the currently preferred term for “tribe” in Canada, which Somers herself learned while updating the novel.)

Sluman met with First Nations people throughout Alberta and spent decades shuttling back and forth between reference libraries to uncover tragic circumstances that had been swept under the rug or misrepresented. In later years, she would even work on behalf of the Ontario government, reviewing the history books used in schools for inaccuracies. This dedication primarily informed her fiction, like her portrayal of the violent Northwest Uprising of 1885, which serves as the riveting and complex backdrop of The Amulet.

Within the novel, the beautiful Catherine is wed to a gruff trader named McNab. He brings her to his trading outpost at the remote Pounding Lake, where she is immediately ill at ease with her new marriage, the locals, and the horrendous treatment of the local Cree Indians. Catherine finds herself particularly drawn to a handsome Cree interpreter named Jay Clear Sky, but the others at Pounding Lake do not share her empathy for the Native people, especially an agent named Jim Burr. Just as Catherine realizes she is falling in love with Jay, Burr’s brutal tactics leave the Cree so desperate that they revolt and take over the town.

The uprising throws Catherine, her husband, and her budding romance into a volatile political situation with no easy solutions. It all plays out against the stark, wintry landscape of Alberta, creating “an engrossing narrative that has everything required for a successful historical romance: a strong-willed heroine, a mysterious and forbidden love interest, and a viper’s nest of villains who eye Catherine lasciviously,” says the Kirkus review.

In one of the book’s most stirring moments, the soft-natured Jay addresses the recently captured settlers and forces them to confront their role in creating the violence:

“Be quiet!” he bellowed. “You got yourselves into this. All winter we watched you in your warm clothing, full of good food, while we froze and starved before your very eyes. Our babies died because mothers had no breast milk for them. Elders died because they gave their food to the young people. The agent abused us, and no one here tried to stop him.”

Somers explains that at the time of the real-life rebellion, it was reported that the Native population erupted without cause. But that was, of course, not the case. “They were provoked beyond reason,” Somers says. “With no end in sight, they believed it would be better to die fighting. Anyone, anywhere, no matter what their upbringing, would have done the same.” Although The Amulet features plenty of page-turning suspense and operatic love scenes, the real driver behind Sluman’s writing was fostering these more objective, nuanced views on history.

Whatever guilt Somers may have felt for not revising the story before her mother’s death, she can now put it aside as she pays tribute to Sluman by releasing The Amulet, reissuing the first two books, and launching the website www.historicalfiction.CA. “We’re creating an entire community for Canadian writers, poets, photographers, and people who are interested in history,” Somers says of the project. “We’re actually taking it a step further than my mother ever could have.”