The Mask You Wear 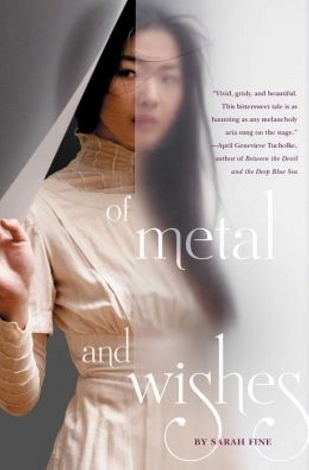 Cover Story: Goin’ to the Chapel

Bonus Factor: Phantom of the Opera

Cover Story: Goin’ to the Chapel

I took this book to my husband’s bicycle race this past week and one of his friends asked why I was reading “a wedding book.” I’m not entirely sure what that means, but I can see his point—the woman’s dress on the cover looks a little old-fashioned wedding-ish and the curtain she’s drawing aside does have connotations of a veil.

Wen used to have a charmed life. Her father was once a well-respected physician, and her mother’s talents at sewing and embroidery were unsurpassed. Sadly, when her mother fell ill, and the sickness was beyond her father’s best efforts to cure, Wen is forced to move into the Gochan One slaughterhouse and become her father’s assistant. She continues to use her mother’s teachings, however—on flesh rather than fabric. And not all is boring about factory life; rumor has it that the slaughterhouse is haunted by a Ghost who occasionally grants wishes.

Upon first meeting, Wen is a sad, somewhat pitiable person. Her mother’s death has left her with a gaping hole in her heart, and the new, drastically different life she is forced to lead at Gochan One is not one she would have chosen for herself in a million years. It’s apparent, however, that, given the chance and some time to heal, Wen is a patient, dedicated and willful (in a good way) young woman who makes an effort to do what is right and follow her heart, regardless of the consequences.

When a group of poor Noor come to the factory to, essentially, work as indentured servants, Wen is at first afraid. She (and the rest of her people) have been led to believe that the Noor are barbaric, violent and ignorant lesser beings. When one of them is hurt on the job, and is brought to her father’s clinic by a surprising Noor with pink-toned skin and copper hair—a Noor who can speak their language with ease and whose eyes are a piercing and unique shade of jade—Wen soon realizes that the truth is much different than she was led to believe.

There’s something unusual about the world in which Wen lives. In Of Metal and Wishes, Sarah Fine has created a world that could be historical, yet isn’t. (At least, not to my knowledge.) There are hints of Asian culture in the people who live in the Gochan factory compound, but no real ties to anything specific from world history. The life Wen lives is without much in the way of modernity—no Internet, no TV, no phones—but it’s not completely in the Dark Ages: There is electricity, Wen uses a typewriter and animatronic creatures of metal roam the hallways of the factory seemingly of their own free will. The world Fine has created leaves me a bit confused, but not entirely in a bad way. There’s a hazy quality to the story that makes me feel like someone’s just retold me a dream they had, but they couldn’t quite remember all of the sharp details.

Bonus Factor: Phantom of the Opera

If you’re familiar with the Phantom of the Opera, you’ll understand where the Ghost comes into play quickly. If not, don’t feel the need to rush out and Wikipedia it. Of Metal and Wishes’ story stands well on its own.

I really wasn’t expecting there to be more to Wen’s story. Sure, the ending was a bit open, but nothing dire or too cliffhangery; I felt satisfied when I got to the last page. Knowing there are more books to come—regardless of the fact that I enjoyed this one quite a bit—makes me less satisfied.

Robert Kazinsky as Melik, the Noor

I’ll be honest: I really liked you, Book. I thought your story was interesting and a great take on a retelling of a story I know decently well. When we got to the end of the night, I was satisfied with our date…but then I found out you wanted more. I suppose I’ll give you the benefit of a second date, eventually, but I hate to mess with a good thing.

Of Metal and Wishes is available now.

Mandy lives in Austin, TX, where she's an editor/writer for an educational non-profit by day and a pop culture junkie by night. When she's not ensconced in a book for Forever Young Adult, Mandy can be found swooning over superheroes, dreaming of The Doctor and grinning at GIFs.