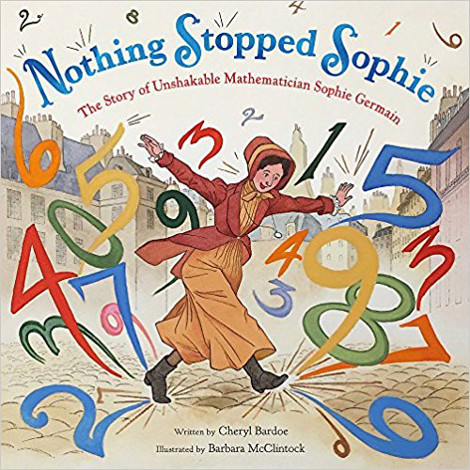 I’ve been thinking lately, especially since we’ve passed the midway mark of 2018, about which picture books this year have been my favorites, and here’s one today that arrived on shelves just last month and quickly endeared itself to me—Cheryl Bardoe’s Nothing Stopped Sophie: The Story of Unshakable Mathematician Sophie Germain, illustrated by Barbara McClintock. This is one to pore over, and each time I do, I find something new to appreciate. This one falls squarely into the Be Sure You Don’t Miss It This Year category.

This is the story, beginning in her girlhood in Paris during the French Revolution, of the groundbreaking self-taught mathematician and physics pioneer Sophie Germain, whose work on the concept of vibration patterns made her the first woman to win a grand prize from the prestigious Royal Academy of Sciences in France. We learn that, as a girl, she had to be sneaky about her math studies; her parents worried that “being smart would bring their daughter heartbreak and scorn.” Unable to attend university by the time she was 19, since no professor would read the work of a female mathematician, she managed to procure notes anyway and submitted her work via mail, signing her papers with a man’s name. She continued with this pen name, even after eventually being outed in Paris as “the girl prodigy,” until her historic submission to the Royal Academy. At that point, she finally signed her own name to her brilliant work. (Closing notes from the author flesh out even more of Sophie’s accomplishments, including her work on Fermat’s Last Theorem.)

Bardoe writes with precision and expert pacing, using repetition (“nothing stopped Sophie”) and repeated bird imagery (“Telling Sophie not to think about math was like telling a bird not to soar”) to pleasing effect. One thing I especially appreciate about this text is how Bardoe captures the eloquence of math, which is too easily disdained by the world of the arts, as if the two have nothing in common. I have noticed that lyricists, in particular, sometimes use “mathematics” as shorthand for tedium, as if math itself cannot be a source of inspiration. Math gets thrown under the bus on a regular basis. But not here, Bardoe writing:

Sophie discovered that mathematicians use numbers as poets use letters—as a language to question, explore, and solve the secrets of the universe. She read how ancient Greeks wrote equations that made the impossible possible: Water flowed uphill….A lone man pulled mighty ships ashore….A scholar measured the size of the earth….Sophie longed to become a mathematician and write such poems of her own.

Earlier, Bardoe writes that math has “clear and simple laws” and a “strong sense of order” and that it “defines when the world is in balance.” These, not to mention solving the very “secrets of the universe,” are all things of beauty and wonder, indeed.

And what McClintock accomplishes here is also a thing of wonder—she makes visible on the page formulas, equations, and the motions that send vibrations “surging through nearby objects.” And it works. (It would be easy to make such spreads hard on the eyes with artwork that is too busy, but McClintock nails it with smart composition choices and, as always, her clean, detailed, graceful lines.) When Sophie dreams of math as a child, equations appear in a thought bubble of sorts. Any illustrator might choose to paint this, sure. But, later, McClintock puts imagination, scale, and color to work to show such things as numbers drowning out the sounds of the French Revolution outside Sophie’s door (mammoth numbers on the very streets); a cloud of equations cocooning her at a dinner party, where she was “surrounded by gawkers in finery” and where she knew not what to say, eager to talk about math but dismissed for being a female wanting to do so; Chladni plate patterns on the cobblestone streets, as Sophie has an epiphany about sound vibrations; and more.

The most striking spread may be the penultimate one, the one noting her historic award from the Royal Academy of Sciences. “No one could deny that she was a mathematician now.” Here, Sophie stands on the steps of the academy building, her pen poised in the air. Flowing from it is the formula that won her the prize. It weaves in and out amongst all the male members of the academy. In a closing illustrator’s note, McClintock writes about choosing to take this nonliteral approach, given that women were only allowed into the building if their mathematician or scientist husbands were with them.

It’s a remarkable story in an elegantly packaged piece of nonfiction. (Be sure to take the dustjacket off to see the art underneath, front and back.) I’ll say it again: Be sure you don’t miss this one. It’s truly inspiring.