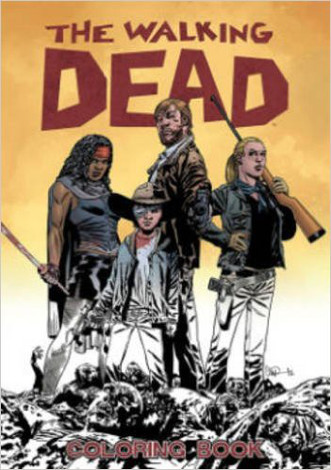 One of the perks of collecting comic books – at least for me – was the pull list. That fantastic little piece of paper the comic book shop kept on file for you with all the titles you wanted each month. As the new books came in, someone would pull the books from your list and set them aside for you. All you had to do was come in and pick them up. And pay, of course. The other great perk was the advanced preview book and order form. This showed you everything coming out in a couple of months, and you could go through and order stuff like tshirts, posters, figures, cards, etc.

I spent a lot of money at my local comic book store back in the day.

Today, I take a different approach to these things, but I still like to look forward at what’s coming out soon, and I thought you’d like to see the top three on my upcoming wish list…

The Walking Dead Coloring Book by Robert Kirkman. Okay, technically not a graphic novel, but come on! Let’s face it, the adult coloring book craze is absolutely sweeping the nation, and what better book to flex your coloring muscles on than one filled with desperate humans attempting to evade and escape flesh-eating zombies? Filled with art from the long-running series, this book should let you open up your imagination a little. Add your own color and flair to the pages, as it were. Just don’t color this one alone in the dark, okay?

Official Description: This oversized adult coloring book features art from throughout the long-running series. Sure, THE WALKING DEAD has never had color, but don't let that stop you from coloring in all your favorite survivors and zombies! Just make sure to stock up on plenty of red.

Spider-Gwen Vol. 1: Greater Power by Jason Latour (Author), Robbie Rodriguez (Illustrator). Marvel and DC are known for having alternate Earths, histories and the like. On Earth-65, Gwen Stacy was bitten by a radioactive spider, granting her super-spider-powers and she took on the persona of Spider-Woman. Her fellow student at Midtown High, Peter Parker, wanted to be like his hero, Spider-Woman, and attempted an experiment to give himself powers. That backfired, and he became The Lizard. Gwen watched him die in her arms. …or did she? In this book, it appears as if The Lizard may be back, and it’s up to Gwen to figure out what’s going on, and who he/she is.

As twists go, I have always liked this one. Gwen Stacy sat as this shadow over Peter Parker for decades, but now they have given her a story and a world that’s all her own. Can’t wait for this one.

Official Description: Gwen Stacy is back in the webs and has an all-new, all-different mystery to solve: the reappearance of the Lizard! The Spider-Woman of Earth-65 was convinced that the Lizard died in her arms along with Peter Parker. But a new reptilian rampage leaves her with doubts not only about Peter's life, but his death as well. Troubles begin to mount as the Osborns of Gwen's world make their debut, and she finds herself on S.H.I.E.L.D.'s most wanted list! Perhaps some wise words from a mentor figure could help - how about Jessica Drew, the Spider-Woman of Earth-616? What lessons about power and responsibility will Jess have to share, and what use will they be when Gwen battles the Goblins?

Elseworlds: Batman Vol. 1 by various artists and authors. Back in the

day, before all the alternate timelines became the norm, really, there was a thing called ‘Elseworlds’ at DC Comics. There was also ‘What if…?’ over at Marvel. Although slightly different, the core of these books was the same – taking the heroes we know and tossing them out of the main continuity to tell new, fresh stories. In Elseworlds, you might get a Batman in the Victorian era, or a Superman who grew up on Apokolips and raised by Darkseid. Real mind-bendy kind of stuff. This collection brings together some of the best of the Batman Elseworld stories, including Holy Terror, where Bruce Wayne is a priest who dons the mantle of the Bat to investigate the execution of his parents by corrupt theocratic government. Cannot wait for this one.

Official Description: For the first time ever, Batman’s Elseworlds tales are featured in a new graphic novel collection. In Elseworlds, heroes are taken from their usual settings and put into strange times and places—some that have existed, or might have existed; and others that can’t, couldn’t or shouldn’t exist. The result: stories that make characters who are as familiar as yesterday seem as fresh as tomorrow. Featuring Batman as a holy priest, Harry Houdini alongside the Dark Knight, Dr. Wayne reanimating a Frankenstein-like Bat-Man, Batman as a Green Lantern, a supernatural Bat-Man fighting the evil wizard known as the Dark Joker, a future Robin fighting off an alien invasion, and other tales! Collects BATMAN: HOLY TERROR, BATMAN: THE BLUE, THE GREY, AND THE BAT, ROBIN 3000 #1-2, BATMAN/DARK JOKER: THE WILD, BATMAN/HOUDINI: THE DEVIL’S WORKSHOP, BATMAN: CASTLE OF THE BAT, BATMAN: IN DARKEST KNIGHT and BATMAN: DARK ALLEGIANCES!

Patrick Hester is an author, blogger and 2013 Hugo Award Winner for Best Fanzine (Editor - SF Signal), and 2014 Hugo Award Winner for Best Fancast. He lives in Colorado, writes science fiction and fantasy, and can usually be found hanging out on his Twitter feed. His Functional Nerds and SF Signal weekly podcasts have both been nominated for Parsec awards, and the SF Signal podcast was nominated for a 2012, 2013, and 2014 Hugo Award. In addition to his Kirkus posts, he writes for atfmb.com, SF Signal and Functional Nerds.
MORE FEATURES
POPULAR KIRKUS STARS