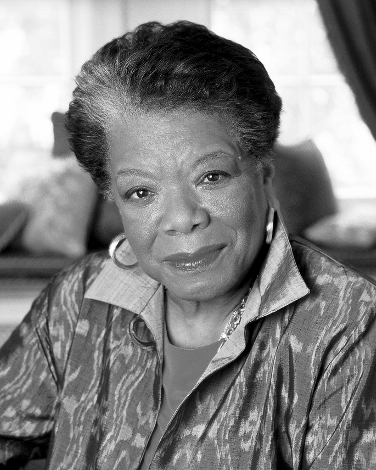 Born in the urban South but raised in the countryside, a migrant to the West during the uprooting years of World War II and later to the Northeast, a laborer and an artist, an activist and teacher and, in the end, a very wealthy woman, Maya Angelou knew many worlds, many of them at the edges of the mainstream and well beyond its ken. In many respects, her experience is that of the larger African American experience in the 20th century, though for all that, and for all her close identification with the struggle for African American civil rights throughout her adult life, she strived always for universalism. “I speak to the black experience,” she would write of her work, “but I am always talking about the human condition—about what we can endure, dream, fail at and survive.”

She knew great suffering as a child. Born to a teenage mother, she lived with her grandmother in a poor Arkansas bayou backwater until her long-absent father turned up one day and took her back to the city. There, a few years later, a boyfriend of her mother raped her, an experience she suppressed by not speaking for nearly five years—time, she records, that she spent reading incessantly, enraptured by the escape afforded by Dickens, Poe and Shakespeare.

When Marguerite was a young teenager, the war industry pulled her family to factory jobs in California. In San Francisco, Marguerite worked as a cable car conductor, giving birth to a son at the age of 17 just before leaving high school. She turned, briefly, to prostitution to support herself, apparently destined to follow her mother into a demimonde of poverty and crime. But then, by good fortune, she met the pioneering dancer Alvin Ailey and began to work with him. It was as a dancer in San Francisco in the mid-1950s that she took the name Maya Angelou, blending a childhood nickname with a form of her Greek then-husband’s name. She appeared in theatrical performances, toured Europe with a traveling production of Porgy and Bess, and even recorded an album of calypso music.

All along, Maya Angelou had been writing, and in 1959 she moved to New York to try her fortune. At the same time, she became involved with the civil rights movement and began working as an organizer for the Southern Christian Leadership Conference. Like other activists in the 1960s, she settled for a time in

Africa—first Egypt, then Ghana—before returning to the United States. Her reputation as a writer had been growing with the passing years, but she spent most of her time on poems, essays, and television scripts before taking up a challenge by an editor at Random House and writing her first memoir, I Know Why the Caged Bird Sings (1969), with its utterly telling title.

Today, 45 years later, that work is a classic of African American literature, the best known of the half-dozen volumes of autobiography that Angelou wrote over the next 30 years. So, too, are her poems, affirmations of the struggle for freedom and human dignity that marked the inaugurations of Bill Clinton and Nelson Mandela alike. That struggle is universal, and though we are far from going beyond what she called “the idiocies of racism and sexism,” it is not for want of her trying.

“I have crafted myself,” Maya Angelou once declared. That she did. She died today, May 28, 2014, at the age of 86, at the end of a long life that she faithfully recorded—and created.