The Metamorphosis of Astounding Science Fiction 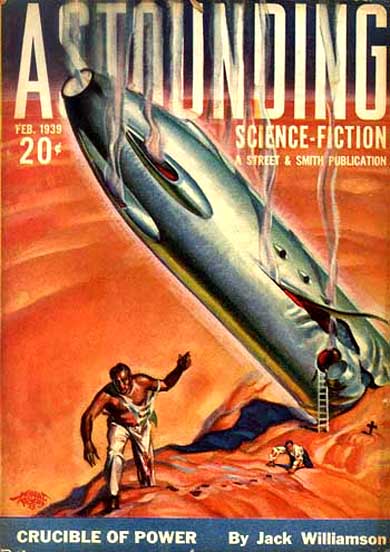 The 1960s marked a period of transformation in science fiction. Changes in printing technology and economies of scale sparked a profound change in the mediums in which science fiction inhabited, which in turn prompted changes in reader habits. Stylistic changes were also afoot, as a new generation of writers began to deconstruct the genre's tropes and insert new ideas into the mix. Amid this change, the genre's flagship publication, Astounding Science Fiction, underwent its own transformation.

The magazine had long been led by veteran editor John W. Campbell Jr., who took the reins of the publication from editor F. Orlin Tremaine in 1938. From the summer of 1939 and into the turbulent post-war years, he used Astounding to force science fiction to modernize, upgrading the level of quality and types of stories being told across the genre.

Often ornery, opinionated and at times offensive, Campbell built a stable of authors through which he established a reputation for solid fiction. By the 1950s, however, Campbell faced an increasing amount of competition: new magazines, such as Galaxy Science Fiction and The Magazine of Fantasy and Science Fiction, began to establish their own lines of quality fiction. Additionally, he faced the rise of science-fiction paperback novels, which began to upend the traditional mode of genre fiction.

In the face of this, according to the Encyclopedia of Science Fiction, the fiction of Astounding began to wallow: "This was symptomatic of Campbell's growing wish to see the ideas of sf made real, a wish that led him into a fruitless championing of backyard inventors' space drives and Psionic machines."

Campbell, always a fan of pseudoscience even as he encouraged a higher standard of science in his stories, began to lose his way right when the ideas onl

y imagined in science fiction were starting to become real. By the end of the 1950s, as tensions between the United States and the Soviet Union kicked off the space race, Campbell began to realize that he needed to make some changes to keep with the times.

According to the magazine's website, Campbell started thinking that the name Astounding was too sensational and that a change was in order: "He chose 'Analog' in part because he thought of each story as an "analog simulation" of a possible future, and in part because of the close analogy he saw between the imagined science in the stories he was publishing and the real science being done in laboratories around the world."

Moreover, Campbell seemed to recognize that the older, pulpy image of Astounding pointed the magazine toward failure. As mentioned in Alva Rogers' retrospective on the magazine, Requiem for Astounding, Campbell noted in an editorial that "the readers of today are far too sophisticated for the stories patterned after the classics of yesterday. The men who wrote the stories in the forties lifted the level of science fiction tremendously. That had two effects: it made it a more satisfying and powerful influence on readers, which expanded the readership of the field, and it made it enormously tougher for the younger would-be writers to start writing in the field."

Astounding's transformation was a gradual one: rather than phase out the title between issues, the transition from Astounding Science Fiction to Analog Science Fact & Fiction took place over most of 1960. The February issue kicked off the change: Astounding Science Fact & Fiction remained on the cover, but with the word ‘Analog’ in faded red letters behind it. In March, the red grew a bit brighter. April's issue saw both titles sharing the A on the title, one over the other, while in June, the solid colors which had belonged to ‘Astounding’ gave way to a solid red ‘Analog.’ In October, the cover dropped ‘Astounding’ altogether. The magazine's transformation was complete.

The name change in and of itself wasn't notable: the publication had begun its life as the dramatic Astounding Stories of Su

per-Science, before changing to Astounding Stories in 1931 (and back and forth again), before becoming Astounding Science Fiction in 1938. Mike Ashley, writing in his history of genre magazines, Transformations: The Story of the Science Fiction Magazines from 1950 to 1970, noted that Campbell was aware of the changing perceptions of science fiction in general, and he wanted to change the tone and appearance of the magazine from that of its origins into something more relevant: "It was time for Astounding to rid itself of the stigma of the old comic-book aura of the sf magazines and enter a new age. Analog was science fiction for the seriously scientifically minded, of all ages, but it was not going to pander to the monster-movie or UFO fanatic, even though Campbell persisted in his fascination for alternative sciences."

Other superficial changes were afoot: in 1961, publishing company Condé Nast acquired Street and Smith, the longtime publisher of Astounding/Analog. This shift probably represented the greatest change in appearance of the magazine: between November and December 1961, the magazine changed its look from traditional to sleek and modern. In 1963, Analog dramatically went from a traditional digest-sized magazine to a larger size. The changes, according to Ashley, were purely financial: "Analog was Condé Nast's only digest-size magazine—in fact it had already been an anomaly at Street & Smith, but was left along. Condé Nast forced it to change, and the reason was that advertisers' plates were set up to fit the standard size of the slick magazines. The slicks relied on their advertising income to survive—they were far too expensive to rely purely on revenue from sales." The new size was short-lived however: by 1965, the publication reverted back to a digest. At the same time, it changed its title again, this time to Analog Science Fiction and Fact, its present title.

Beyond the aesthetic changes, Campbell's content in the magazine didn't change all that dramatically. He continued to publish excellent fiction: look no further than his decision to publish Frank Herbert's Dune cycle. But while the magazine remained popular, Ashley asserted that the editor "did little to take the magazine forward….In fact, it was Analog's stability that recommended it to many readers." Still, Campbell seems to have fallen into a comfortable creative rut: the innovative spirit that had radically changed the face of the genre was gone, and even some of the authors in his stable, such as Isaac Asimov, described his later years as "only a diminished shadow of what he had once been."

Campbell remained at the reins of the magazine until his death in 1971, upon which time the mantle of ed

itor was transferred to one of his regular writers, Ben Bova, who began to transform the magazine in his own ways. Under his tenure, according to the Encyclopedia of Science Fiction, "authors such as Roger Zelazny, who would not readily have fitted into Campbell's magazine, began to appear. While the editorial policy remained oriented towards traditional sf, a more liberal attitude prevailed, leading to some reader protest over stories by Joe Haldeman and Frederik Pohl, which, though mild by contemporary standards, were not what some old-time Astounding readers expected to find in Analog."

Bova remained with the magazine until 1978, when he intended to leave editing behind him (only to be snatched up by Omni Magazine shortly thereafter). In his place, a new Analog writer was hired as the magazine's editor, Stan Schmidt, who had published his first short story, 'A Flash of Darkness,' in the magazine just 10 years earlier. Schmidt would remain with Analog as another constant force until 2012, with a tenure matching that of Campbell's and thus ensuring that the magazine continued boldly into the future.

The transition of Astounding to Analog was largely a superficial one, but it’s a change that kept with the times, and previewed some of the changes in the genre that would occur in the years to come. Campbell, while innovative in his early years, had become comfortable, strident, and unwilling to adapt as the genre continued to evolve. The eventual changes in style and tone would come after his death, when the magazine found new leadership. Despite Campbell’s unwillingness to innovate, he did strike a solid tone, and his longevity imparted a consistency to his magazine that allowed it to continue forward and survive to the present day.