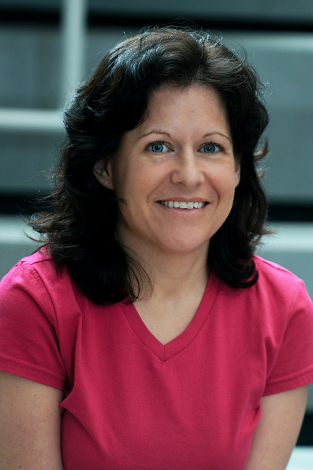 Those of you who follow picture books closely may remember the anguished cries of early 2013 when the Caldecott Award winners were announced and Kelly Bingham’s Z Is for Moose, illustrated by Paul O. Zelinsky, wasn’t mentioned. To be sure, children’s literature shouldn’t always be about awards, not to mention the fact that pretty much nothing could take away the book’s greatness. But all that’s to say that the inventive and very funny ABC story of a moose, who had trouble waiting his turn and generally left chaos in his wake, was a picture book

adored by legions of fans.

These fans will be happy to know Moose is back—and in a tale equally entertaining and fun. Circle, Square, Moose just arrived on shelves, and this time Moose eagerly disrupts one narrator’s attempts to instruct readers in the way of simple shapes—circles, squares, triangles, and the like. Zebra is back too, since the frustrated narrator can’t seem to get Moose in line.

Since I was curious to talk to both Bingham and Zelinsky about this sequel, I enthusiastically butted into their work schedules, much like Moose would, to snag some of their time. (Moose is proud of my tactics.)

Talk about writing this sequel. Did you feel pressure, given the great success of the one before it?

Kelly: Definitely! I worried that no matter what I did, people would be disappointed. I had to put those fears aside and just focus on writing the best story possible. Once I was able to put the worry aside, I was able to remind myself to have fun while writing it. When I wrote Z Is for Moose, I just sat back and had fun with it. I had no expectations of submitting it somewhere or trying to get it published, so I just played. I remembered all that and reminded myself to relax and have the same fun with this book, too. And hopefully that shows.

Paul: The same thing happens when it’s not a sequel, if you’ve ever had success at all. And it’s not just a matter of acclaim; it’s a private pressure. What if what yo

u’re working on now just doesn’t come out as well as earlier work? What if you’ll never meet that standard again? It’s not helpful, so I vow that however the book comes out, I’ll forgive myself if I’ve tried as hard as I could.

Given your previous collaboration on Z Is for Moose, were you two able to collaborate on this one as you wrote? Or was there still the traditional separation of writer and artist?

Kelly:  There was pretty much the same traditional separation as the first time, which I think has its advantages. Certainly it made for a fun feeling of suspense, as I waited to see what Paul would do with the text. I did have the fun advantage of knowing what Moose and Zebra would look like—and having some idea of what the design and color would be like, too. But of course, that was only the tip of the iceberg.

It was a joy, a thrill, and a surreal sense of awe, when I saw Paul's artwork for the first time for this book. He took the text to a whole new place with his illustrations. He threw in so much action, humor, fun and personality that I was laughing outloud at the illustrations. And the way Moose thoroughly runs through, over, around, and INTO the pages of this book is just incredible. How does he come up with such creative images? I feel so very fortunate to share this book with him. He's amazing!

Paul, considering Moose’s predilection for interrupting the narrative, I imagine tons and tons of artwork outtakes. Is that the case, or do you pretty much know before you start the illustrations how precisely Moose will wreak havoc and cause mayhem?

Paul: Before I start the illustrations, I don’t think I have any ideas about anything. But it’s usually my ideas in the first few rough sketches that I find myself using in the end, no matter how many other stages come in between. In Circle, Square, Moose there were plenty of outtakes, but they were mostly the same drawings made over and over again, hoping for one to come out better than the others.

How involved were you in the overall design of the book?

Paul: In some books the design and the illustration can be more or less separated. In this book, as in Z Is for Moose, the illustration is the design. My sketches and dummies included almost everything a graphic designer would normally contribute to a book. Greenwillow designer Sylvie LeFloc’h, whom I’ve enjoyed working with on many books over the years, didn’t have a lot of designing to do, besides helpfully reacting to the choices that I made and choosing the type, which we did together in her office. There are two fonts: one for the content of the shape book (“Let’s talk about Rectangles!”) and another one for when the book is talking to Moose (“You are in the wrong book!”).

Sylvie still had to prepare everything to go to the printer and keep track of production issues, but in terms of design, not so much.

What's next for each of you? Will we see Moose again?

Paul: I am working on illustrations for a picture book by Emily Jenkins, featuring the characters from our Toys Go Out books. It’s called Toys Meet Snow.

Kelly: I am working on a middle grade novel and several picture books.

Something tells me that this will NOT be the last Moose book. Moose has a way of getting what he wants, despite poor Zebra's best attempts at Moose-control.

Paul: Yes, there is more Moose in the future!