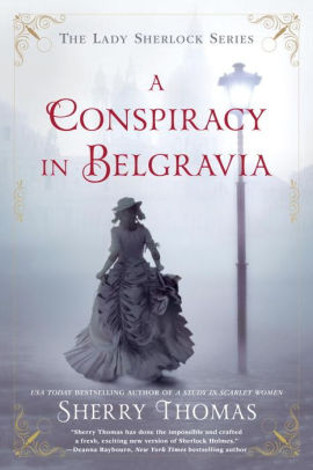 It’s funny how similar books come in clumps—one month there will be five novels with “girl” in the title, or everything will be coming up Paris. This early autumn sees three mysteries related to Sherlock Holmes (though, admittedly, almost every season sees mysteries related to Sherlock Holmes), all with a feminist spin. The House at Baker Street, by Michelle Birkby (Oct. 24), imagines that Holmes’ landlady, Martha Hudson, teams up with Watson’s wife, Mary, to help a woman who’s too embarrassed to confide her problem to the great detective. Our reviewer’s verdict: “Appealing characters, gruesome homicides, and a detailed period setting in a blend as balanced as a perfect cup of tea.”

A Conspiracy in Belgravia (Sept. 5) is the second installment of Sherry Thomas’ series about Charlotte Holmes—a reimagining of the canon in which a Victorian woman detective poses as a man named Sherlock. Thomas is best known as a romance novelist, and our reviewer says Charlotte’s relationship with her friend Lord Ingram is “deliciously unpredictable…their unconsummated desire is held in check only by her lack of romantic inclinations and dispassionate knowledge of her own flaws—and his mistakes….Readers of Victorian fiction, romance, and detective

stories will each find something to draw them in.”

In Vicky Delany’s Body on Baker Street (Sept. 12), a bookstore owner turns sleuth. Gemma Doyle is an Englishwoman living in Massachusetts and the owner of the Sherlock Holmes Bookshop and Emporium. When bestselling author Renalta Van Markoff—who, coincidentally, writes mysteries starring Holmes’ landlady, Mrs. Hudson—is poisoned during a book signing, Gemma turns to detective work herself. Our reviewer says that “remarkably, the heroine, who is often indeed annoyingly like Sherlock Holmes, manages to solve the mystery without alienating all her friends.” Laurie Muchnick is the fiction editor.