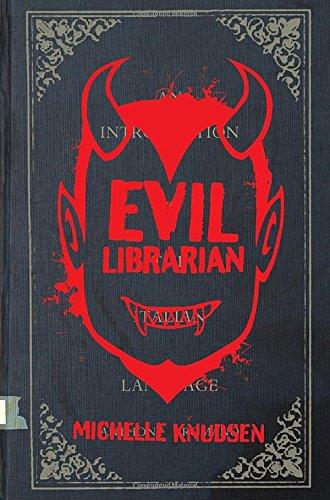 Which has me more than a little excited.

So, of course, it made me wonder: what’s out there for recent musical theater YA? It seems like something that we’d see a lot of, right? High potential for drama, because backstage shenanigans and close quarters and heightened emotion. Tailor made literary parallels, since the story would be centered around a play. And, on the purely commercial side of things, an immediately attractive hook for a TV or movie pitch.

Sadly, WRONG. I’ve done some poking around and there really isn’t a whole lot out there. Even if I included Tim Federle’s Better Nate Than Ever and Five, Six, Seven, Nate! (which are solidly middle grade), and E. Lockhart’s Dramarama (which, at a decade old, in no way qualifies as recent), it’s a pretty short list. Here are the very few that I found:

As we all know from Once More, with Feeling, musical demon hunting makes for seriously great entertainment. In this series, the titular Evil Librarian is a demon looking to eat some souls and find a child bride—and the only thing that stands between him and his Dastardly Plans is Cyn, a musical theater nerd who just so happens to be resistant to demon magic. The first book is centered around a school production of Sweeney Todd, the second takes place at musical theater summer camp.

He-said, she-said about Jack, a former Broadway child actor who is determined to Put All That Behind Him now that he’s living in Ohio, and Louisa, an aspiring musical theater star who is determined to get Jack into the local production of Into the Woods. I don’t remember ever even HEARING about this series before now. That might be because it’s geared a bit young—Jack is twelve in the first book—but it might also be because the reviews aren’t particularly glowing. But… it sounds like the series’ main strength is in its love for musical theater, so onto the list it goes.

Confessions of a High School Disaster, by Emma Chastain

Due out a little later this year, this one sounds like a pretty standard contemporary realistic written in diary format, but among the many issues that the protagonist is contending with is her unexpected casting as the lead in the school musical.

Hold Me Closer: The Tiny Cooper Story, by David Levithan

I have no doubt that you already know this one! It’s a spin-off of the 2010 Levithan/John Green collaboration Will Grayson, Will Grayson that tells the story of Tiny Cooper… as a musical, in script format, complete with stage directions and song lyrics.

And… that’s pretty much all I found. Are there more out there that I’m missing? Also, I can’t be the only one who’s craving these stories, can I?