The Must-Read Speculative Fiction Books Coming Out in August 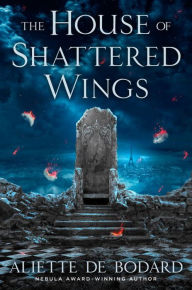 Are you looking for a way to stay afloat in a seemingly never-ending sea of science-fiction, fantasy and horror book releases? Fear not, intrepid reader! Check out this month's latest roundup of must-read speculative titles, which includes a centuries-long war, parallel worlds, alternate history, extinction-level events, hackers, and what really happened in Lewis Carroll's Alice's Adventures in Wonderland.

The House of Shattered Wings by Aliette de Bodard

WHAT IT'S ABOUT: In a world of angels and magic, the great House Silverspires lies on the brink of ruin. When three very different people—a fallen angel, an addicted alchemist and a young man wielding mysterious magic—come together, it might mean its salvation or its complete destruction.

WHY YOU MIGHT LIKE IT: Recasting the War in Heaven to the city of Paris in the late-20th century brings with it a certain allure.

His Father's Eyes by David B. Coe

WHAT IT'S ABOUT: A hardboiled, magic-using private detective named Justis Fearsson battles a legion of dark sorcerers in Phoenix, Arizona. He's also a weremyste, which means that every month, on the full moon, he loses his mind.

WHY YOU MIGHT LIKE IT: The case files of Justis Fearsson offer an engaging urban fantasy mystery series.

WHY YOU MIGHT LIKE IT: After reading hundreds of stories every year, Ellen Datlow's eye for high-quality, and her tendency to pick stories across the broad spectrum of horror and weird, means there's something for everyone, and likely lots of stuff you never would have seen otherwise.

Court of Fives by Kate Elliott

WHAT IT'S ABOUT: In a strict society of the Haves and Have-Nots, a young girl defies her station by training for a multilevel athletic competition that upends her life and threatens the safety of her family.

WHY YOU MIGHT LIKE IT: You name it: the heroine going up against the odds; tests of loyalty and obedience; examinations of race, gender, and class attitudes; danger and intrigue; and/or the historical setting reminiscent of the Egyptians and the Mayans—it's all in there.

WHAT IT'S ABOUT: A single volume containing two separate stories (Hear the Wind Sing and its sequel Pinball, 1973) about two young men coming of age. These stories explore themes of disaffected youth, loneliness and alienation.

WHY YOU MIGHT LIKE IT: Murakami made a noisy splash on the literary world several years ago. These early works, available for the first time in English, shows hints of the author's genius.

Lament for the Afterlife by Lisa L. Hannett

WHAT IT'S ABOUT: A decades-long portrait of Peytr Borysson, a man born into a society beset by a centuries-long war with the enigmatic "greys." The history of the war's cause—as well as who the enemies actually are and what they look like—are lost to time, and there are more questions than answers for the people of this complacent society.

WHY YOU MIGHT LIKE IT: An excellent example of speculative fiction-as-mirror, Lament for the Afterlife causes readers to challenge comfort and question the status quo.

WHAT IT'S ABOUT: A woman named Alice doesn't remember why she's in the terrible hospital in Old City, all she remembers is a tea party long ago and the horror with long ears. When a fire in the hospital allows Alice to escape through a hole, she begins to uncover the truth of what really happened all those years ago.

WHAT IT'S ABOUT: In the continuing adventures of FitzChivalry Farseer and his friend the Fool, the Fool is near death at the hands of pale-skinned enemies and Fitz's daughter is abducted. With nothing left to lose, the heroes seek to set things right once again.

WHY YOU MIGHT LIKE IT: The second book in the Fitz and the Fool trilogy defies Second Book Syndrome and delivers some unexpected surprises.

WHAT IT'S ABOUT: A technologically enhanced spy in the near-future undertakes a mission to track down the surviving member of a spaceship crew thought lost...and finds a doorway into a parallel world that's even more dangerous than his own.

WHY YOU MIGHT LIKE IT: Having proved his mettle with the Dire Earth Cycle, Hough has combined all the ingredients of a first-rate sci-fi thriller.

The Entropy of Bones by Ayize Jama-Everett

WHAT IT'S ABOUT: Chabi, a girl with special abilities that make her a deadly weapon, is devastated to learn that her master has disappeared. Chabi is thus vulnerable to her enemies, and altogether unaware that her master may no longer be on the side of the gods.

WHAT IT'S ABOUT: The people of the continent of Stillness is no stranger to Extinction Level Event calamities, but even so, a single day brings disturbing events: a great rift appears in the earth, an empire collapses, and a woman named Essun comes home to find that her husband has brutally murdered their son and kidnapped their daughter. Essun thus vows to rescue her daughter amidst a dying world.

WHY YOU MIGHT LIKE IT: Jemisin is a proven master at storytelling and this is your chance to get ion on the ground floor of an exciting new series.

The Dark Forest by Cixin Liu

WHAT IT'S ABOUT: The people of Earth, still reeling from the revelation of a coming alien invasion, are at a definite disadvantage. The aliens have access to all human electronic information and only the human mind eludes their grasp. Thus, a group of four humans become responsible for devising a defense strategy for humans to use against the impending aliens invasion.

The End of All Things by John Scalzi

WHAT IT'S ABOUT: The Colonial Defense Union—set up to protect the Earth and humans while they expand outward across the universe—is living on borrowed time. Lieutenant Harry Wilson and a group of Colonial Union diplomats seek to strengthen Earth's defense forces while tracking down the motive of the unknown faction that antagonizes both aliens and humans.

WHY YOU MIGHT LIKE IT: This is a triumphant return to the authors hugely entertaining Old Man's War universe.

The Madagaskar Plan by Guy Saville

WHAT IT'S ABOUT: Set in a disturbing alternate 1953 in which the Nazis won World War II and continue to put their "Final Solution" plan into action, Hitler orders the resettlement of European Jews to the remote island of Madagaskar.

WHY YOU MIGHT LIKE IT: The Madagaskar Plan offers a harrowing look at the future that might-have-been.

Chasing the Phoenix by Michael Swanwick

WHAT IT'S ABOUT: In the distant future, long after the collapse of the old high-tech world and artificial intelligence, Surplus and Darger—a human and a genetically engineered dog with human intelligence who are con-men (no, really!)—devise a scheme to become rich

and powerful: they pretend to have limited superpowers and trick an ambitious local warlord who dreams reuniting China under one ruler.

WHY YOU MIGHT LIKE IT: Swanwick's Surplus and Darger stories always entertain and they can be consumed in any order, allowing readers to dive in anywhere.

WHAT IT'S ABOUT: A ragtag team of five hackers are coerced into using their cyber espionage skills into serving the U.S. government. They discover a sinister NSA program involving an artificial intelligence that, if not brought down, will soon become dangerously uncontrollable.

WHY YOU MIGHT LIKE IT: Part underdog story, part everyday hero story, this fast-moving cyber-thriller is one that will keep you turning the pages.

But wait! There's more! In addition to The Best Horror of the Year Volume Seven mentioned above, here are some short fiction books to check out. Some are single-author collections. Some are multi-author anthologies. All of them offer tasty short fiction treats for those smaller reading moments.

o  Three Moments of an Explosion: Stories by China Miéville

o  A Better Way to Die: The Collected Short Stories by Paul Cornell

o  Let Me Tell You: New Stories, Essays, and Other Writings by Shirley Jackson

o  The Mammoth Book of Frankenstein edited by Stephen Jones

o  Falling in Love with Hominids by Nalo Hopkinson