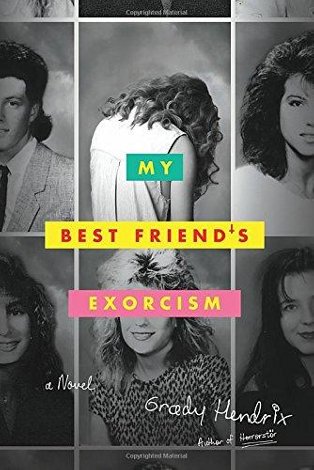 In 1984, two very different little girls became best friends. Abby was having an E.T.-themed birthday party, and no one from her class showed up because of a rival party on the same day (even though Abby’s party was first, thankyouverymuch). Except, then walked in Gretchen, with her weird gawkiness and not knowing how to skate or who E.T. was—but she thinks it was mean that Margaret planned her party on the same day as Abby’s on purpose. With a couple of skates around the rink and the pounding of The Go-Go’s “We Got The Beat”, the two become friends.

Over the years, they become best friends. No one and nothing can come between Abby and Gretchen—they love each other, and even though nothing is perfect they have each other.

But then, the fall of 1988 comes, sophomore year at their prestigious Charleston prep school—and something very bad happens to Gretchen. She’s not quite herself… and only Abby seems to realize that what is happening to her best friend isn’t drug-related, or the pressure of expectation, or sexual promiscuity, or heavy metal, or the two of them growing apart, or any of that.

Something evil has taken Abby’s truest friend. And only Abby can stop it.

I picked up My Best Friend’s Exorcism this week for two reasons: First, it is almost Halloween and that means horror novels and movies nonstop. I’ve been eyeing this book since last year, and with it being the season for demonic possession and horror and all, I figured it was about time. Second reason: Stranger Things season 2 is back tonight and I really want to be in that ‘80s nostalgia King vibe right now. So, Grady Hendrix’s newest novel was a perfect read at the perfect time for some good, schlocky horror fun. What I wasn’t expecting, however, was a book with a genuinely powerful message about the power of friendship, and the horrors of growing up. Holy damn, is this book good.

Personally, the thing that resonates the most for me in any exorcism or demonic possession or curse story is the strength of love between the protagonist and the possessed. Because without that love, without that underlying hope and devotion to the person who has now become a vomit-spewing monster, the possessed would be lost forever. You’ve felt this way in horror novels and films, right? In The Exorcist, you were definitely thinking at one point, “Nope, if I had that in my house I am running the hell away, sorry kiddo.” The whole power and central conflict in an exorcist-style story is this love, in spite of the horror—and this is is something that My Best Friend’s Exorcism encapsulates beautifully. It is the strength of the love that Abby has for Gretchen—and that Gretchen clings to in her darkest hours for Abby—that makes this book work. The story itself isn’t so much about the rite of exorcism (unlike Blatty’s classic); rather, it’s about how the friendship between these two girls grows from the time they’re in elementary school through high school, and how it is challenged by the mundane (i.e. other girls, boyfriends, teachers, parents) and the supernatural (i.e. demonic posession). The exoricism itself lasts for just a chapter—but damn it is effective and genuinely tear-jerking. (I’ve seen a couple of comparisons to the “San Junipero” episode of Black Mirror—to this, yes. A million times yes; although not a romantic relationship, the love between Abby and Gretchen will make you cry.)

Of course, this is a horror novel, too, and it does not hold back in this regard. Gretchen-demon does some truly horrific things that I don’t want to spoil—but it involves embalmed fetuses, worms, emotional manipulation, and violence towards animals. I love that, thematically, the book examines all of the excuses adults can make for horrific behavior—it must be drugs, or stress, or Bad Influences—and how easily one person’s opinion and cry for help can be pushed aside. Abby feels utterly powerless to help the person she loves most, and is repeatedly belittled, bullied, threatened, or ignored by the authority figures in her life. And yet, despite all this, she still tries because no one else will.

Finally, I’d be remiss in this review if I didn’t mention the format of the book. The novel itself is a book-as-object, In the format of a yearbook (the hardcover edition) and then a VHS tape (the paperback edition)—interspersed throughout with advertisements, pamphlets, Y magazine quizzes, and so on. While this book is less deightful and impactful an object as was, say, Horrorstor (which took the format of an Ikea catalog in all of its blue-printed glory), it was effective nonetheless. (My favorite touch was the yearbook endpapers on the hardcover version—I had COMPLETELY forgotten about people signing “ur 2cool 2b 4gotten” and other utterly yearbook-y things. A couple of nice easter eggs await there, and in the yearbook’s final ads.)

In the parlance of the ‘80s, My Best Friend’s Exorcism is totally rad. Do yourself a favor, and read it as soon as possible.

In Book Smugglers, 8 Maddonna-style crucifixes out of 10.