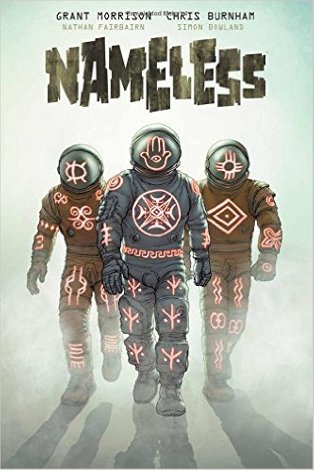 Where does reality end and dreams begin?

In a melding of (or homage to) Hellblazer/John Constantine and every outer space disaster, earth-is-doomed movie you’ve ever seen – plus Aliens – Grant Morrison and Chris Burnham’s Nameless, makes you ask yourself that very question over and over. Nameless is the title character, a deeply flawed hero in the vein of a John Constantine, who is both a practitioner and student of mystical forces. In the opening scenes, he is moving through someone else’s dream in search of a key. Or is that reality and the world he ‘wakes’ to actually the dream? In that reality, the earth is in danger from an asteroid hurtling towards it. The twist? The asteroid has a giant rune on it, a mystical symbol carved right on the surface and large enough to be seen in photographs. A desperate mission is put together to reach that asteroid and save the earth. But the addition of someone like Nameless to the team isn’t exactly welcome. He senses the mystical forces arrayed against them and paints sigils to protect them and himself from those forces. But what if it’s already too late? What if the battle is something very different? Which reality is the real one, and which are dreams?

Well, what a trip.

If you’re looking for a dense story with plenty of twists and turns to keep you guessing what’s really going on, this is the book for you. Not a straight up science fiction story—there’s a lot of magic and symbolism throughout, but not so much that you feel like this is a fantasy. On top of that, there’s more than a fair share of horror elements to boot.

So I find myself having difficulty shoving this book into any particular category.

I’ve mentioned John Constantine a couple of times now, and the character Nameless truly does remind me of John. He’s a bit surly, cusses now and then, says things people don’t particularly appreciate or want to hear, and plays by his own set of rules, often ignoring the dictates of those around up. Plus, he is the expert on the supernatural and occult in the story, a specialist pulled in for those specific skills. Several times while reading the book, I wondered if this wasn’t Morrison showing us his desire to write a Hellblazer story – and maybe auditioning for it.

That’s not to say this is a story Constantine would find himself in. There are less overt magical elements than you would find in one of his pieces. Here, you have more done in dreams than anywhere else. In dreams, Nameless has the power and strength he, perhaps, doesn’t have in the real world. But figuring out what is and isn’t reality is a bit tricky.

I like the premise of the asteroid hurtling towards earth, even though it’s been done many times before. Specifically, I like how it’s setup, the mystery surrounding it, and the ultimate truth of it—none of which I will reveal to you here because, well, spoilers, sweetie.

The art – not all of it struck a chord with me. Some of the more powerful imagery included the astronauts in their space suits covered in sigils and runes of protection.

That was very cool, and set a mood for those scenes I very much liked. However, overall, the art felt bulky to me. The horror was done in gore-tastic detail. If you like that, you’ll like this. Wide shots, exterior shots, space shots were all very well done and suitably epic in scale. Characters – the men felt over-drawn and, details, the women almost normal. As an example, on a close up of Nameless, every nook and cranny of his face, every hair, neck muscle, even his fingers, are detailed and filled with something – lines, shadows, more lines, etc. By contrast, in the same frame, Sofia has smooth skin, nary a nook or cranny, barely any muscle definition. I don’t know if this was intentional or not, but it was a bit difficult to ignore and often distracting.

Overall, the book is intense with deep themes and a hefty story. If you’re looking for something with the flavors of sci-fi, paranormal, and horror, Nameless could be right up your alley.