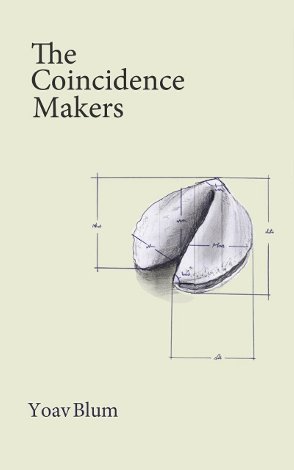 The worst crime a reader can commit is wasting free time by not reading. A corollary to that is reading books that don't blow you away. Life is short and reading time is even shorter so spend that time reading good books. Here's a handful of worthwhile science fiction & fantasy books to kickstart your weekend...

The Coincidence Makers by Yoav Blum

We like to believe that we are at the controls of our own destiny, but what if that wasn't the case? What if those seemingly random coincidences that change lives—a missed flight, a found lottery ticket, an accidental scientific breakthrough—were not random after all? What if there was a secret organization solely devoted to creating and carrying out the events that we call coincidences? Guy, Emily, and Eric are three operatives (so-called Coincidence Makers) who move in the shadowy area between fate and free will, affecting the lives of those around them. Most of their assignments have been fairly standard operating procedure, but then Guy receives an assignment that he knows is the most important one he's ever had to fulfill. Find out how this coincidence tests these mysterious agents' views of fate and free will in Blum's exciting thriller.

The world recently lost one its best writers. Ursula K. Le Guin was one of literature's largely undiscovered treasures. She changed the face of science fiction by writing sf stories about the human condition in a way that made it accessible to readers of any genre. In addition to receiving numerous prestigious literary awards, last year she was honored by the Library of America with a must-have collection, Hainish Novels & Stories. Now, in a new collection of interviews titled Conversations on Writing, Le Guin discusses the craft of writing and philosophy in her fiction, poetry and non-fiction. These compelling and informative interviews offer readers a chance to see her views on the genre wars, feminism and the patriarchy, the natural world and the what goes into great writing. It's a good read for fans, writers and anyone interesting in reading about an incredible individual.

In this weird, twisted take on Sleeping Beauty, a woman in the Wild West named Carol Evers suffers from a condition that periodically puts her into a temporary death-like coma. Only two people know about her condition. First is her husband Dwight, who married Carol for her money and finally sees the opportunity to claim it: by proclaiming Carol to be dead when her next trance hits then burying her alive to cover his tracks. The second person is Carol's lost love from twenty years prior, James Moxie, who is now a legendary outlaw. James hears of Carol's unlikely demise and attempts to come to her rescue, all the while contending with the evil character known as Smoke, a man with tin legs. Malerman's blend of weird western and taut thriller is a hard combination to beat.

Gods, Monsters, and the Lucky Peach by Kelly Robson

Somewhere at the intersection of historical fiction, climate fiction and time travel sits Robson's mind-bending story Gods, Monsters, and the Lucky Peach. Here in the year 2267, Earth is only now recovering from the ecological disasters that forced people underground. In spite of long-term efforts to restore the world back to livable conditions, humankind has invented time travel as a way of obtaining a short-term solution. Minh, who was working on a project to restore Earth before the funds were diverted to the time travel venture, is now assigned to go back in time to 2000 B.C. to survey the Tigris and Euphrates rivers as preparation for restoring those ecosystems back in the twenty-third century. In doing so, she uncovers secrets of the shadowy think tank that controls time travel technology.

Daughters of the Storm by Kim Wilkins

In this this Norse-flavored fantasy epic, five very different sisters — all daughters to the king — team up against their stepbrother to save the kingdom. There's Bluebell, a proud warrior; Rose, queen of a neighboring kingdom who risks everything for a forbidden love; Ash, who learns she has a talent for magic that just might be a curse; and the two twins Ivy and Willow. Ivy's love for herself is matched only by Willow's love of the gods. When their father becomes ill, the embark on a journey to save him and prevent he kingdom from falling into the hands of their power-hungry stepbrother. To complete their journey, they must find a witch who can cure their father, but they can only do that if they overcome their differences and work together...and that path is not an easy one.

The Feed by Nick Clark Windo

There's no denying we're living a digital age with unprecedented connections to others through social media. In Windo's dark future, the level of connection is amped up even higher. The Feed is accessible by everyone everywhere and allows people to instantaneously share all information — every interaction, every image every thought can be shared with friends, loved ones, family and coworkers. But what happens when that foundation of interpersonal connection breaks down? It's an apocalypse like no other with scarce supplies, minor injuries that can now kill, and a massive loss of trust. Tom and Kate at least have a leg up on others when the modern world comes crashing down around them. Tom, whose father created the Feed, has been increasingly resisting its pull. He'll need his wits about him because someone has kidnapped their daughter.