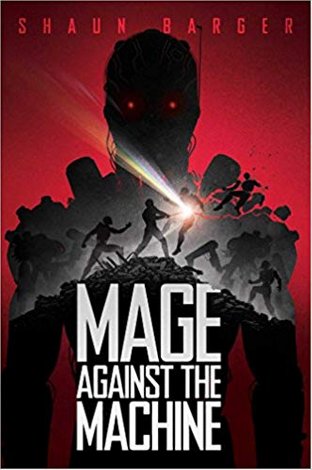 If you're like me, your To-Read pile is probably already overflowing with books. The last thing you need is someone adding to that backlog. I hear you. But what kind of book lover would I be if I didn't call your attention to these worthwhile science fiction, fantasy & horror books that you might not have heard about? I'll just leave these here...

Mage Against the Machine by Shaun Barger

Magic and technology collide in Barger's refreshing debut novel, described as "Harry Potter meets The Terminator." In the year 2020, the King's mages live under domes to protect them from the nuclear wasteland beyond, a result of a weaponized magical disaster that killed all humans one hundred years before. Or so they are told. The truth is that humans are still alive and outside the dome a war rages between them and vast machine intelligences. This shatters the world of Nikolai, a newly-trained mage whose eyes are opened after he is betrayed by a former mentor.

The Mansion by Ezekiel Boone

In this ghost story with a technological twist, two computer nerds, Shawn Eagle and Billy Stafford, start their own company to build a next-generation computer. Unfortunately, they part ways after Shawn's girlfriend, Emily, leaves him to be with Billy. Dejected, Shawn takes their Big Idea and turns it into one of the world's biggest tech companies. Years later, Shawn decides to resurrect his and Billy's unfinished masterpiece—an artificial intelligence. His testing ground is an abandoned mansion in update New York where the AI named Nellie is set up to control the house's every function. When the project is plagued by an alarming series of tragedies, Shaun invites Billy and Emily, now destitute, to move into the house to debug the AI's troubled psyche.

The Mortal Word by Genevieve Cogman

Cogman's fun Invisible Library historical fantasy series revolves around the so-called Library, a massive repository of books from many alternate Earths which is located outside of the normal time stream. In this latest entry, the murder of a dragon at a peace conference threatens the fate of worlds. Irene, a time-travelling Librarian, is assigned to investigate the case. Then it's off to 1890s Paris, where Irene and master detective Vale discover that the victim had uncovered a conspiracy within the Library itself.

The Sorrows by Jonathan Janz

What do you do if you own an island off the coast of northern California that has been uninhabited since a series of gruesome murders occurred there in 1925? Well, when two film composers say they'd pay good money to stay there because they want to be inspired to write the score for a new horror film—you say yes. Only after composers Ben, Eddie, and their friends get to Castle Blackwood do they come to realize that an evil force resides there, trapped for nearly a century. And now it's ready to feed.

SF/F Grand Master Anne McCaffrey's Dragonriders of Pern series is a fan favorite. Set on a far-off planet colonized by humans in the distant past, humans ride telepathic dragons to protect the world from the ever-present threat of Thread, a lethal space-borne spore that rains destruction from the sky. In honor of the fiftieth anniversary of the first Pern story, Anne's daughter, Gigi, has picked up the mantle of telling stories in this fascinating world. In Dragon's Code, the balance of power on Pern hangs in the balance after the long dormant Thread returns and, for the first time, dragons are on the verge of fighting other dragons.

Archenemies continues the story by New York Times-bestselling author Marissa Meyer begun last year with Renegades. The set-up is that the so-called Renegades, a rogue syndicate of prodigies (humans with extraordinary abilities) emerged from the ruins of a collapsed society to restore order. Against this backdrop is the ill-fated relationship between Nova, a super-villain who seeks revenge against the Renegades, and Adrian, who is a Renegade himself. In Archenemies, Nova is leading a double life, maintaining two covers: one as Insomnia, a Renegade who possess power over sleep, and another as Nightmare, a villain determined to destroy the Renegades. But Nova's feelings for Adrian could foil her plans.

Creatures of Want and Ruin by Molly Tanzer

In this fun Prohibition-era dark fantasy, Long Island bootlegger Ellie West is helping her brother pay for college by selling illegal moonshine at night. When wealthy strangers ask Ellie to supply the alcohol for an extravagant party, she sells them everything she has—including (unbeknownst to Ellie) booze acquired from a cult of diabolists promising salvation and a return to the good old days. Those who drink the demonic booze see terrible things—like the destruction of Long Island itself in fire and flood. It's up to Ellie and a visiting socialite to stop this supernatural menace.