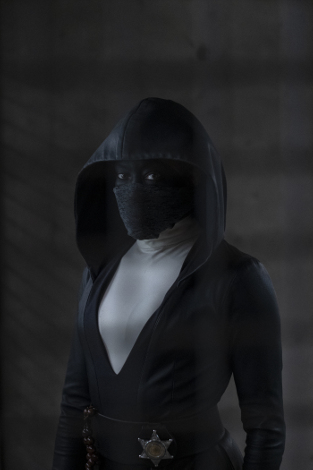 HBO has dropped the first full-length trailer for its Watchmen TV series.

It’s based on the comic-book series by writer Alan Moore and artist Dave Gibbons, first published as a single-volume graphic novel in 1987. Their work has received many accolades; Time magazine placed it on a list of the 100 best novels published since 1923. Its influential, grim-and-gritty deconstruction of superhero mythology presented a world of deeply flawed masked men (and a few women—well, mainly one woman). But a Zack Snyder-directed film version, released in 2009, looked like the last we’d see of Watchmen onscreen.

The new series’ showrunner is the formidable Damon Lindelof of Lost and The Leftovers fame, and it’s clear that his show—which is set many years after the events of the original comic series—has a lot on its mind. Like Moore and Gibbons’ work, it’s deeply concerned with what drives a person to hide his identity. One character, who looks like the comics’ character Hooded Justice, says, “Who am I? If I knew the answer to that, I wouldn’t be wearing a mask.”

The show also envisions a society in which even professional policemen disguise themselves to avoid being identified by criminals. This prompts an FBI agent, played by Emmy Award-winning actor Jean Smart, to ask, “You know how you can tell the difference between a masked cop and a vigilante?...Me neither.” Lindelof confirmed to IGN that Smart is playing Laurie Juspeczyk, a.k.a. Silk Spectre, from the original comics series. Jeremy Irons will play another character that fans will find familiar: Adrian Veidt, a.k.a. Ozymandias.

The series, which also stars Oscar-winner Regina King, is set to premiere in October.