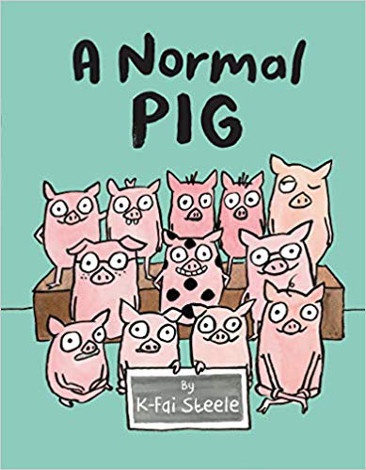 Children can be mean, and bullying can be remarkably subtle. Two of the truest details of Jacqueline Woodson’s devastating picture book Each Kindness, published in 2012 and illustrated by E.B. Lewis, is that a group of girls at an elementary school ostracize a new student for the secondhand clothes she wears, as well as “the strange food she brought for lunch.” Bullying isn’t often about the loud troll stealing the nerd’s lunch money in the hallway. It can be way more precise.

Enter Pip, the protagonist of K-Fai Steele’s A Normal Pig, coming to shelves in early June. Pip is a happy pig and “a normal pig who did normal stuff.” Observant readers will notice that Pip lives in a remarkably homogenous community; all the other pigs are solid pink, and Pip is spotted. Pip’s mother is solid grey, and her other parent is pink. But no one seems to care. Pip lives her life in her stellar Pip way, doing her thing and being a hundred percent Pip at all times.

But one day a new pig arrives at school, singling out Pip at the lunch table. “EWW! WHAT ARE YOU EATING?!” the pig yells. “IT STINKS!” Pip’s lunch may look different from her classmates’, but it was “just her normal lunch.” Pip is stunned. And the new pig continues to draw attention to Pip’s differences; in turn, other students start to notice. In one spread, one pig points to Pip’s mother, the grey parent, and asks if it’s her babysitter. “That’s my mom,” Pip responds. This is a question a lot of children of mixed-race families get. I think of the BBC interview that went viral a couple years ago (may small, spunky Marion rule the world one day). When the interviewee’s wife, who is Asian, barreled into the room to retrieve the children, many people online assumed she was the nanny.

Pip’s wise parents suggest they take her to the big city. It’s her first trip there. They visit an art museum—and the world expands for her. She hears a variety of languages that are not her own being spoken all around her. She sees a playground teeming with pigs of various colors, stripes, and spots. In one very funny spread—funny, because Pip is obviously and perhaps uncomfortably trying too hard to emulate the loud new pig at her school—she asks another pig during lunch at the museum if there is “anything on the menu that’s not so weird.” The pig’s relaxed response—“maybe it’s weird for you, but not for me”—is a revelation to Pip.

Pip’s got it from here. It is with a look of utter determination and resistance that she tells a trio of pigs at the cafeteria in school on Monday that her lunch may be weird to them, but not for her. This is a moment of triumph for both Pip and readers. She goes a step further by asking them if they’d like to try her lunch. Touché, Pip.

Steele not only nails school-yard dynamics but also the crisis of confidence that can visit a child in situations like this. How quickly Pip goes from gloriously self-

confident to impressionable, vulnerable, and painfully susceptible to criticism, and how honest that all is. Pip went from being comfortable in her own skin and her place in the world to feeling tremendous doubt and anxiety. The trip to the big city clearly opens up her very world. Stepping away from the uniformity inherent in her own community, her worldview expands exponentially. Something so seemingly simple can instantly boost a child’s sense of self, and Steele captures this well.

She is also an illustrator capable of details that are just plain funny. See the stressed parent pig in the background of an outdoor school spread, anxiously texting. Check out Pip’s “cool” tween poster in her bedroom. Look for the pig in the busy museum spread, staring at piece of modern art and saying, “I don’t get it.” Her relaxed, expressive watercolors bring us instantly endearing characters, and there is a spirited energy to her work. And it seems the story may hit home for her. In a 2017 visit to my site, she wrote:

Even when I was little, I had a strong sense of humor and an anti-authoritarian streak. My family is mixed-race, and the town I grew up in was rural and not diverse. I didn’t fit in. That sense of being an outsider despite all my best efforts is something I still carry. Lately I’ve been interested in drawing and writing about characters who struggle with their identity and how others perceive them.

Note that in her story Steele never delves into how to define “normal” or “weird.” There’s no closing author’s note or backmatter necessary. The story takes care of this for us. The honest, funny, engaging storyline alone suggests to readers paying attention that normality is relative and inherently subject to perception and opinion. A clunkier story would be didactic but, instead, Steele altogether entertains us. No finger-wagging necessary.

I’ll have some of Pip’s lunch, please.

A NORMAL PIG. Copyright © 2019 by K-Fai Steele. Published by Balzer + Bray, an imprint of HarperCollins, New York. Above illustration is reproduced by permission of K-Fai Steele.