New YA to Check Out in February 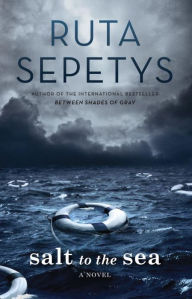 First day of a new month—let’s take a look at some of the new books we’ve got to look forward to!

The Girl From Everywhere, by Heidi Heilig

I’ve already read and written about this one. It’s great fun and fast-paced, feels fresh and original, and is (mostly) set during a period of Hawaii’s history that I’d never read about before. Even better, it’s thoughtful—in my column about it, I talk about how Heilig highlights “the importance of perspective, to the strange realization that depending on the circumstances, opposites don’t always have to cancel each other out. That they can both be right, and that they can co-exist.”

I’ve been friends with Tanita for years, so I generally avoid writing about her books because I worry about objectivity. I always, ALWAYS read them, though, and I especially loved this one. It’s about family—family you are born into and family you create—and trust and class and race and prejudgment. Both voices—the narrators alternate—are so clear and so honest and so angry. (I’m always, ALWAYS up for stories about angry girls.)

Salt to the Sea, by Ruta Sepetys

Speaking of things I’m always up for: books by Ruta Sepetys!

Her previous books have been vibrant and compelling and meaty, she chooses less-covered historical eras or events to focus on, and her characters are complex and their emotions have immediacy, but they’re always products of their own time. This one is about the 1945 sinking of the Wilhelm Gustloff, as told in four voices.

Symptoms of Being Human, by Jeff Garvin

A gender-fluid protagonist! The Kirkus reviewer had a few quibbles, but I’ll be picking this one up for sure.

These Vicious Masks, by Tarun Shanker

I’ve heard SO much chatter about this one, and I can never resist fantasies set in the Victorian era.

The Rule of Mirrors, by Caragh M. O'Brien

Three middle titles in three series I’ve been meaning to get to: the first a Southern ghost story; the second a dystopia that pits the Moon against Earth; and the third about (in part) a conspiracy to steal peoples’ dreams.

The title is a literal description of Ward’s version of the apocalypse: the Earth starts bleeding. While I’m getting a little apocalypsed-out, I’m in for this one because Kirkus praised it so highly—and stressed that it’s SUPER GROSS, yay!—and also because our heroine is dating another girl.

There’s a dearth of honest—and nonromanticized—depictions of sex geared toward the teen audience, so I’m always on the lookout for more. Fingers crossed!

The Word for Yes, by Claire Needell

The Bitter Side of Sweet, by Tara Sullivan

A story about children and teenagers enslaved at a modern-day Ivory Coast cacao plantation. Like Sullivan’s previous book (also starred!), the situation in the book mirrors real life. Starred review.

Of Better Blood, by Susan Moger

Historical set in the ’20s that deals with polio and eugenics and an escape from a sideshow. I’ve been looking forward to this one since spotting it at Midwinter.

Time travel story set in Wales, starring a modern-day girl trained in the longbow—and who lost an eye to said training—who finds herself back in the time of Henry VIII. Maybe it’s just the Wales connection, but I’m getting a distinctly Dark is Rising vibe from the description—and that’s really all it takes to get ME interested.

After the Woods, by Kim Savage

A year after Julia and her best friend were attacked by a man in the woods, Julia is still investigating the incident…even though the perpetrator was apprehended and committed suicide in prison. Starred review, and Kirkus praises the relationships and the writing even higher than the mystery itself. I’m in.

Historical set in the ’50s, loosely based on Peter Pan. The daughter of an abusive civil rights lawyer falls for a homeless boy, a Japanese-American orphan struggling to survive—and take care of a group of others—after losing everything after years in an internment camp.

Dystopian about a society that tattoos anyone who commits a crime. According to Kirkus, it has “a Dickensian feel,” which I generally find irresistible, and it also plays with different formats, which is another draw (there are excerpts from a fictional zine that explains the history of the world via comics).

The Forbidden Wish, by Jessica Khoury

A rewrite of Aladdin and the Magic Lamp that Kirkus says is “dripping in magic, strong women, and forbidden love.” I have no doubt that there will be some dark February day that will require all three of those things to get me through.

WHEW. That is…a lot of books to be interested in reading. You?