Not My Cuppa Butterbeer: J.K. Rowling's 'The Casual Vacancy' 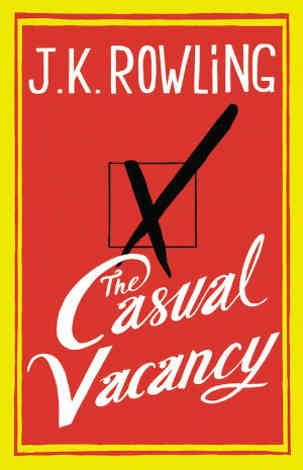 If J.K. Rowling consciously set out to write a book to prove that she is not limited to child-wizard fantasy—and I think that’s entirely likely—she has succeeded with The Casual Vacancy. But not magically, and readers who hope to find something of Harry within its pages won’t.

Like most of the publishing industry, I’ve had half an eye on the loudly trumpeted first adult book by the author of the much-beloved and billion-selling Harry Potter series. It wasn’t a particularly skeptical eye, either. As Clayton Moore described last week, plenty of authors have crossed over between children’s and adult with success in both directions. I didn’t see any reason to believe Rowling couldn’t pull it off, especially as she’s had a few years off to clear her mental decks for it.

And she did pull it off, I guess, but what a joyless exercise in reading it was. Just in case you’ve been under a rock for the past month and this is the first you’ve heard of Rowling’s new book, the titular casual vacancy refers to a suddenly open seat on the parish council, created when charismatic champion of the poor Barry Fairbrother unexpectedly dies of an aneurysm. This happens on page 5.

Roundabout page 100, candidates for the seat begin to emerge. The intervening 95 pages are devoted to glacial setup of the characters and the psychodynamics of the utterly unmagical Pagford, a picturesque hamlet in the West Country that sits cheek-by-jowl with the equally unmagical, though larger and decidedly unpicturesque, Yarvil. At the center of the political fracas is a blighted slum called the Fields, located geographically in Pagford though economically in Yarvil, and the addiction treatment center many Fields residents turn to for succor.

(It was here that I begged the features editor to be let off the hook, as the thought of reading the next 400 pages depressed me even more than the book already had. We’d already covered it, thanks to Clayton, and by the time I finally sludged through it, wouldn’t it be old news? “Well, it would be really nice to be able to weigh in on the finished book,” she responded cheerily. Ugh.)

I can’t say I liked the book any better as I proceeded. The imagination that produced names like Grubbly-Plank and Luna Lovegood offers up Simon and Ruth Price and Colin and Tessa Wall. The only wordplay in evidence is Howard Mollison’s misapplied moniker for his Anglo-Indian council nemesis, Dr. Parminder Jawanda: “Bends-Your-Ear”—yes, we are a long way from Diagon Alley, especially considering that Rowling takes time to explain to readers that it’s a play on Benazir, as in Bhutto.

Writing with a shifting, third-person perspective, Rowling lets readers into the psyches of some 15-20 characters, and not one of them is actively likable. Most are some combination of venal, smug and self-serving; those who are not tend toward the pathetic. As her story lumbers on to its miserably apocalyptic conclusion, reading it is like being stuck in traffic for several hours as emergency crews slowly extricate the many victims of a pileup. It does catch one’s attention, but there’s nothing fun about it.

So congratulations, J.K. Rowling: You’ve done it. You’ve written a book that is the antithesis of your career-defining series. Now that you’ve got it out of your system, though, can you give us something we will actually enjoy reading?