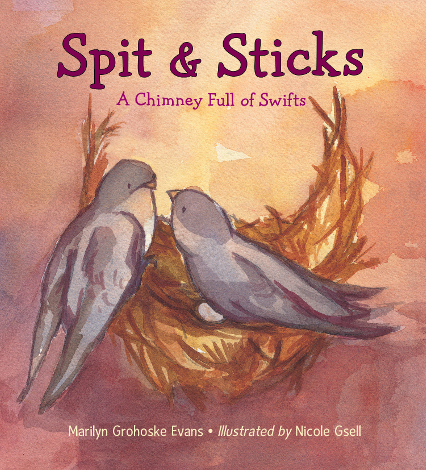 It’s November already. I was about to do that thing where people exclaim, “Where does the time go?” But, well…time marches on, no matter how closely we do or do not pay attention, and that’s all there is to it.

If you have already wrapped your head around November’s arrival, there are two brand-new picture books on shelves that I think make great reads for this month: Mark Pett’s Lizard from the Park and Marilyn Grohoske Evans’ Spit & Sticks: A Chimney Full of Swifts, illustrated by Nicole Gsell. Let’s start with the latter, a book that follows two families, one of “stub-tailed, cigar-shaped” chimney swifts and the other a family of humans.

When this book opens, we meet a chimney swift in the “Texas spring sky” that is many miles away from its South American home. The bird, we read, is looking for the farmer’s chimney where it was born. Another swift joins the bird, they gather twigs, and then their work to build a nest inside a chimney begins. How does the nest stay together? The birds use a “special glue” made from their own “sticky spit.”

The chimney belongs to a loving, multiracial family of humans—a father, mother, and their daughter. Look closely at the mom, and you see that a baby is on the way. The family prepares for the new wee one’s arrival. And the chimney swifts do the same for their burgeoning family—the two birds protect three eggs in their new nest. After the eggs hatch, readers turn the page to see the family arriving home from the hospital, baby in tow and an “it’s a boy” balloon on the mailbox.

To be clear, nothing is anthropomorphized about these birds: this is essentially an informational title framed by a fictional narrative, meaning that since the family is made up, I suspect this would get shelved in fiction. But readers learn a lot about these birds and their habits. No cutesy, talking birds in overalls or anything.

ays, and Gsell’s watercolor illustrations are textured and warm. She used her computer to create a collage of what appear to be fabrics and/or papers for use in the human family spreads and even some landscapes. (The grass is a patterned set of paisleys.)

The bird family grows—and babies learn to fly—while the seasons change and days grow colder until winter arrives and the swifts head for “their other home.” The book’s backmatter notes that chimney swifts migrate from the Amazon region of South America to the U.S. and Canada, and that they typically stay from late March to early November. So, just when we humans are getting reacquainted with hot cocoa in early November, the birds return to South America. Before they do, read this sweet and informative story with your children and/or students.

Mark Pett’s Lizard from the Park tells the story of Leonard, a boy who is often alone and who takes shortcuts through the park—he lives in a big city that one could easily interpret as the Big Apple—and one day finds an egg. He takes it home; the egg hatches; and he thinks he’s got a new pet lizard. He names him Buster. But the “lizard” grows into a very large creature over time—into what is clearly a dinosaur.

Look closely on many of the spreads to see another boy with another lizardlike creature spying on the boy. Both boys eventually take their creatures to be released in the park, as they’ve gotten so big. The creatures then live with a family of other dinosaurs, right where they should be and right where they fit. This is all after Leonard decides that the best way to get Buster to said park would be to sneak him, attached to a whole slew of balloons, into “the big parade.” This may not necessarily be a Thanksgiving parade on the streets of New York City, but it could

certainly pass for one (which is why this is one of my favorite November reads). Hidden among the ginormous cat, clown, and pig balloons floating down city streets is Buster, attached to hundreds of tiny balloons, and Leonard atop him. It’s a funny moment.

In the end, Leonard and the other little boy become friends, making this story partly about loss into one of friendship found and alliances forged. I like to see what Mark Pett does—his unassuming, uncluttered stories are a breath of fresh air—and this one doesn’t disappoint. These are charcoal spreads (my favorite medium of all) with the color painted in digitally.

Two enjoyable, seasonal reads about finding homes, perfect for sharing one-on-one with a child. I raise my mug of hot cocoa to each of them—and to November, even if it snuck up on me.

LIZARD FROM THE PARK. Copyright © 2015 by Mark Pett. Illustration reproduced by permission of the publisher, Simon & Schuster, New York.