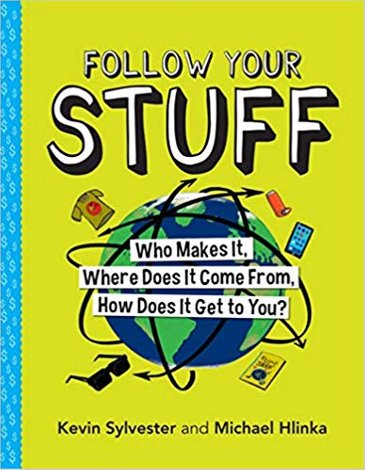 Cue the fireworks, break out the bunting—it’s Canada Day! As we do every July 1, we’ve rounded up some of the best recent children’s books from Canada. Whether it’s the partial government subsidies or just attitude, Canadian publishers can be counted on to supply some of the year’s best books.

From Annick: Follow Your Stuff, by Kevin Sylvester and illustrated by Mike Hlinka. This entertaining dive into the global economy presents five common items, including the book itself, and shows readers the complex chains of manufacturing and trade that bring them to consumers. Our reviewer sums it up as a “thought-provoking breakdown of the real cost of all our cheap stuff.”

From Groundwood: Friends, by Geraldo Valério. In this “joyful aquatic fantasy,” two girls, one human and one mermaid, meet at the ocean’s edge and become friends, their playful encounter erasing boundaries as the human enters the mermaid’s watery world. Though wordless, the adventure is an immersive one for both characters and readers.

From Kids Can: Ojiichan’s Gift, by Chieri Uegaki and illustrated by Genevieve Simms. This moving picture book introduces Mayumi and her grandfather, who creates a stone garden for her at his home in Japan, which she enjoys each summer when she visits. And when Ojiichan ages to the point when he can no longer maintain it, Mayumi steps in, finding solace in its meditative care. “Like a garden, this meticulously composed work will bring readers serenity and joy.”

From Orca: The Invisible Garden, by Valérie Picard, illustrated by Marianne Ferrer, and translated by Liz Kemp. Arianne, the only kid at a family gathering, escapes the adults in Grandma’s garden. As her imagination takes hold, she and readers enjoy a grand adventure, text and illustrations together ensuring that “strolling alongside dinosaurs and capturing stars seem plausible.”

From Running the Goat: Paint the Town Pink, by Lori Doody. When Rose the flamingo shows up in Newfoundland, she looks for a flock to join. None are quite right, so the townspeople, wishing to make her welcome, paint their homes pink in a “heartening, sweet, and distinctive look at one unusual migrant’s successful quest for a new home.”

From Second Story Press: The Case of Windy Lake, by Michael Hutchinson. When an archaeologist vanishes on the Windy Lake First Nation, the Mighty Muskrats are on the case, applying all their Indigenuity to solve it. With this likable whodunit, Cree author Hutchinson crafts “an Indigenous version of the Hardy Boys full of rez humor.”

From Tradewind Books: Boonoonoonous Hair, by Olive Senior and illustrated by Laura James. When little Jamilla expresses her discontent with her puffy hair, her mother uses Jamaican patois and the promise of a new style every day to help Jamilla to see its fantabulousness. The affection between mother and daughter combines with a begs-to-be-read-aloud text to make Jamilla’s “road to self-acceptance...playful, easy, and filled with love.”

So there we have it: a sampling of some of the great books coming across our northern border.