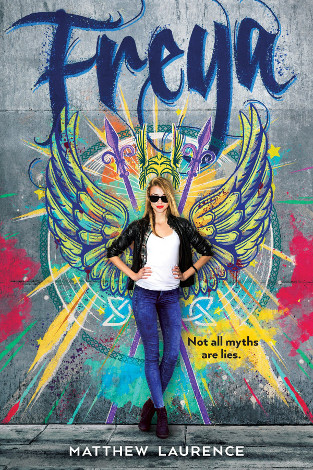 Although the wings on this cover are more colorful than the DeLand Wings, everything about the image reminds me of the photos I’ve seen taken in front of artist Erica Group’s mural in DeLand, Florida.

Sara Vanadi’s not crazy. She’s just living in a psychiatric hospital so that she can be among believers—people who give her strength and purpose through their devotion.

You see, Sara’s actually Freya, the Norse goddess of love, beauty, and war. She needs believers to survive, and they’re few and far between in the modern age.

When a sinister guy finds her with a proposition—come with him, work with his organization, or else—Sara’s righteously indignant. No one tells a goddess what to do, even if said goddess has been out of vogue for a few thousand years. But then sinister guy kidnaps Sara, along with her only human friend, Nathan. And Sara must figure out a way to use her forced participation to her advantage … and her lust for revenge.

Sara occasionally mentions that gods are often total dicks, and she doesn’t exclude herself from being so at times, either. I appreciate her candor, and her dedication to righting the wrongs of the world—plus, you know, there’s that whole superpowered god thing—but I’d constantly be worried that my decisions were not entirely of my own volition. Sara can’t exactly control her powers at times, and she can be very persuasive.

Sara and Nathan have a connection. It’s more of a “high priest”-goddess connection than a love one, given that Sara’s more than a thousand years old and Nathan’s just out of high school, but it’s hard to turn off being a god of love sometimes.

Freya reminded me a little of Francine Pascal’s Fearless series (one of my faves when I was an actual YA), only with actual gods and goddesses, rather than just characters who are named after them. Matthew Laurence has written an intriguing take on what drives deities, and what happens when they’re no longer “popular,” and the conspiracy aspect of the mysterious organization Sara’s forced to work with adds a little of that tried and true Illuminati feeling into the plot.

As far as characters go, Sara’s a believable and layered protagonist, and many of the other gods and goddesses she meets are equally fascinating, but Nathan is unfortunately relegated to merely side-kick territory by the end of the novel, when at first it seemed like he might be so much more.

Since I was little, and someone gifted me a book about Greek gods and goddesses, I’ve been intrigued by the idea of these superhuman individuals. And once you do a little digging, you realize that the members of Olympus are only the tip of the iceberg. There are SO MANY different gods and goddesses from every nation in the world, and they’re all just as intriguing—or perhaps even more so—than the Greeks. Laurence included many of these diverse deities in Freya, and although they are merely bit players for the most part, it’s exciting to read about them, and makes me want to do more research of my own to learn more.

Freya has a somewhat satisfying conclusion, but the ending leaves the world wide open, and there are a few unanswered questions and plot points at the end that make me think there’s more to this story. Not sure if this is the first in a series (Goodreads doesn’t say that this book is No. 1 of anything), but I’d bet it was written as such.

I’m not sure that I fully believe in you, Book, but I like the idea of you. And I’m willing to open myself to more, if you’re willing to give me time. Faith doesn’t come easy, but I can envision you being worthy, eventually.

Mandy lives in Austin, TX, where she's a technical writer by day and a pop culture junkie by night. When she's not ensconced in a book forForever Young Adult, Mandy can be found swooning over superheroes, dreaming of The Doctor and grinning at GIFs.