We talk to the author of NEVER LOOK AN AMERICAN IN THE EYE. 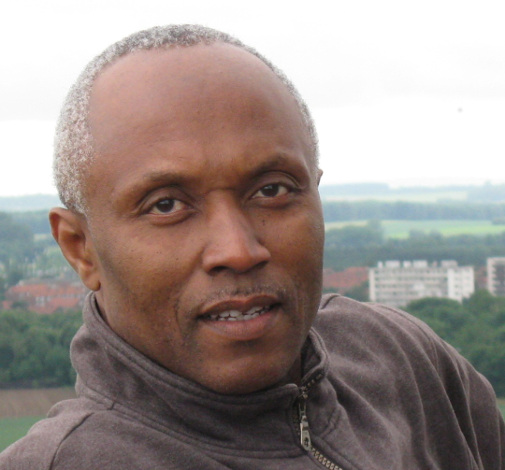 The title for Okey Ndibe’s new memoir, Never Look an American in the Eye: Flying Turtles, Colonial Ghosts, and The Making of a Nigerian American, has a humorous origin when considered in retrospect, but when Ndibe first immigrated to America, the advice almost resulted in severe repercussions. It was his uncle who’d first warned him, “Never look an American in the eye,” just prior to Ndibe’s big move to Massachusetts in 1988. Nigerian-born Ndibe had never left Africa, and as a child, America was a myth, a place of extreme luxury but also of short tempers. Thanks in part to the export of Hollywood westerns in the ‘60s and ‘70s, Ndibe and his comrades believed everyone in United States not only carried a gun, they weren’t afraid to use it.

Looking someone in the eye, of course, was the most egregious of sins, and 10 days after arriving in the U.S., a police officer profiled Ndibe as a bank robber. Of course, Ndibe didn’t realize then that avoiding eye contact with the officer only made his guilt seem more likely. “I was extremely terrified,” he recounts. “I actually thought that it was my last day on earth.”

Ndibe avoided jail (and being shot) that day, but the experience was a harsh welcome to a new and foreign country. This was a recurring theme for Ndibe as he learned to navigate winter for the first time alongside American concepts of time, “personal space,” and frequent misconceptions about Africans, such as the notion that they traveled from Africa to America on the backs of crocodiles (a joke by Ndibe that was taken quite seriously).

But the gravity of Ndibe’s run-in with the police officer is surprisingly easy to overlook upon an initial read, which is the case for most of the book’s anecdotes. This is no accident, of course, and a testament to Ndibe’s innate wit and the eloquent way he writes about the absurd. “Part of my personal disposition is that I always look for moments of great comedy and hilarity in tragedy,” he explains. “In my culture, the best storytellers are those who can find the humorous in the most grave situations. I’ve been a product of that cultural bequest.”

Ndibe was born the same year Nigeria gained autonomy from British rule (1961). Storytellers were a major part of his youth, including their residual colonial sympathies and teachings in school. This December, Ndibe will have lived in the United States for the same amount of time he’s lived in Africa. Though he remains rooted in his Nigerian upbringing and cultural traditions, Ndibe now views himself as a confluence of the two places he’s lived and their respective pasts. “I think about my life in America in relation to American history—the history of slavery, the civil rights movement, and the history that produced Obama as

president of the United States. For me, all of that is compounded into what registers me as an individual,” he explains. “When I think about my life in Nigeria, I also think about the historical moment that produced me. One is never a being in isolation, but a product of several historical forces.”

As a veteran journalist and novelist, Ndibe’s grappled with these historical forces for years in his fiction and articles. But these personal tales, told with an intrinsic charm, are a welcome, edifying new look at an immigrant experience. In today’s political and social climate, it feels more important than ever to remember that these experiences aren’t an anomaly but the historical norm. “America has a profound, undeniable immigrant beginning,” he says, stressing that “nuance” is required for all discourse regarding immigration. “We must recognize that America is, in the end, a much better place when it is open to immigrants. America will betray itself—its legacy and heritage and history—were it to become hostile to immigrants as a tradition.”