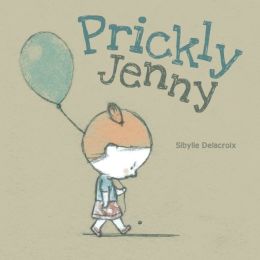 There are countless children’s books about toddlers and what they love. You could also fill a small planet with board books and picture books about the emotions of toddlers, but rarely have I seen the slippery phenomenon that is a toddler’s mood captured as well as it is in Sibylle Delacroix’s Prickly Jenny, originally published in France in 2013 but now on shelves here in the States. It’s a book that had me at its first page: “Jenny doesn’t say good morning because, really, what’s so good about it?” I am far from a morning person, so I laughed out loud at this.

But Jenny is a toddler. (I have no excuses.) And toddlers are mysterious creatures, who sometimes wake up this way. Since they have relatively little time on this earth to learn the management of their emotions, this prickly type of mood often lingers throughout the day, and this is the case for Jenny. She doesn’t want the clothes offered to her that morning. She’d like her old t-shirt, thanks very much. She drags her feet at the fair, despite her father’s best intentions (though, refreshingly, one thing Delacroix does not show readers is so-called helicopter parents bending over backwards to please their little tyke). On one very funny spread, we read:

“There’s nothing but ice cream for dessert, and Jenny says she wants nothing to do with it.”

What is she doing in the accompanying illustration, though? Stuffing her face, of course. With ice cream.

She also refuses to nap later, and here’s where we get to the crux of the problem: Her volatile moods may push her parents away, but she also needs their comfort. She yells for her mother to leave, but she cries when she does. She is feeling “out of sorts,” but Delacroix writes, “she doesn’t want to talk about it. She just wants to be loved.”

Well, that pretty much nails it. This stark moment in the book, so true and so piercing, is next to an illustration of Jenny seated, her head hanging. She is emotionally spent—and at her wits’ end. Whoever said being a toddler was easy? In fact, the legendary late editor and author Charlotte Zolotow wrote about the vulnerability of children in 1998 at the Horn Book (in a wonderful piece about writing for children, available at their site):

Many adults think of children as an emotionally different species from ourselves. But if there is any difference between the adult’s and the child’s feelings, it is in the greater intensity of the child’s. We adults have developed what John Donovan called our “protective coating.” Humor, irony, religion, resignation—anything to give us control and protect us from the full impact. (It can’t always work, but generally it does.) Kids don’t have those defenses yet. Their emotions are the same as those of adults, except for that one tremendous difference—children experience anger, loneliness, joy, love, sorrow, and hatred whole and plain; we, through our adult protection and veneer.

This is precisely what Delacroix captures so well in this book—but not in a way that is patronizing to children or overly sentimental, something we see frequently in picture books.

One of the book’s delights is the specific manifestations of Jenny’s very bad mood. At one point, she holds up a drawing and stares directly at the reader, Delacroix noting that Jenny doesn’t want to hear empty words of praise about her work. Point taken, Jenny.

Or maybe she does. On the next spread, there’s a faint smile. Take note, however, grown-ups: Gush about it too much, and she’ll revert to her foul mood.

As if Delacroix is channeling Zolotow, she writes on the final page about how Jenny may be confused about what she wants today, but “tomorrow, when she’s bigger, it will get better.” The illustration shows her trying on a pair of women’s high heels, nearly stumbling over them and looking down at them in wonder. I’m still thinking about that final image and trying to work out why I wish it were something other than high heels, but it packs a punch, that’s for sure. And it’s a wide open ending that leaves room for children to think, which I always like to see.

Delacroix evidently graduated school in Brussels but now lives in France. Her uncluttered work on a muted and primarily earth-toned palette gets right to the heart of the emotions here. And her ability to capture Jenny’s moods with simple lines is dramatic when it needs to be—and funny right when readers need a break.

Honest and memorable, it’s a book about toddlers that really gets it right.