Open your heart to Portero and Dia Reeves 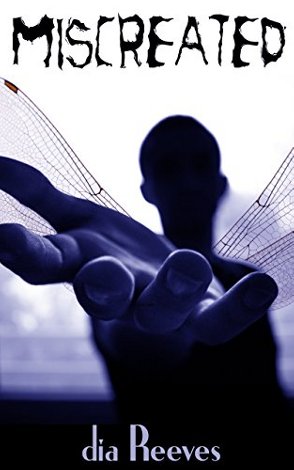 A few years ago I found a town called Portero set in a world unlike anything I had read before, written by a writer called Dia Reeves. Bleeding Violet and Slice of Cherry were the first two books and now, after a long, long wait—YEARS—the author is back with more books set in Portero. Two standalone novels: Miscreated and Heart Sick.

In Portero, doors to other worlds open in mid-air from where people can appear and disappear to never be seen again—and so can monsters. One minute you are on the way to school, the other you are dead if you don't know how to fight off a cackler attack, or if you don't know how to defend yourself against imps. Anything goes in terms of self-defence too: some inhabitants of Portero have been known to have a preference for knives, others for beautiful—yet deadly—jewellery. The mayor of Portero is a centuries old woman who is often able to keep order and protect her citizens but everybody knows that anything can happen at the blink of an eye.

"Death comes to everyone sooner or later," he said, his voice sonorous and confident as always. "But in this town, it comes to some of us a lot sooner than later."

And the citizens of Portero live with that fear and a certain amount of hope they might just make it. One thing you should probably know about the inhabitants of Portero is that none of them is quite right.

Enter Jimi Elba, a senior high schooler, leader of his class, beloved by his peers and protagonist of Miscreated. And there is something very wrong with Jimi. His family knows it too—especially his mother.

He believes he is being hunted by the ghost of a former girlfriend (people tend to die a lot in Portero but sometimes they come back). But during the ritual to free him of the ghost (if Jimi survives the ritual, that is), they realise there is no ghost. Soon after that, a pair of wings sprout from Jimi's back and his eyes become red and he develops a taste for human mean and lo and behold, here is something that the people of Portero might never have seen before. And nobody knows what to make of Jimi—does he even belong here anymore?

For someone used to universal love (well, maybe not quite from his mom. She has changed a bit since that time when they tried to leave Portero for a while but didn't make it in the outside world), this new turn of events is painful. And things only get worse when a new weird girl—Ophelia—is not giving him the time of the day. She is not quite right either: she only appears when people are dying, and Jimi wonders if she is feeding off their souls…

Miscreated is pure Portero and Dia Reeves gold—surreal events abound alongside weird characters that never behave the way you expect them to plus the usual sense of a found family that permeates the stories set in this town. With a twisty plot that goes to places unexpected, the book follows Jimi on a quest to not only understand what is going on with him but also in search of unconditional love. In a town full of high functioning sociopaths, sometimes this a hard thing to find but the people of Portero also tend to be awesome when they are needed. And oh boy, the last few pages of this novel are lovely in getting family and friends railing behind Jimi to save his ass.

Jimi is not exactly a benign likeable character to start with but then again, most people of Portero aren't. They need to have whatever it takes to survive what this town throws at them. Jimi's way is being self-centred and arrogant, a dick-head who sometimes uncomfortably pushes Ophelia into becoming his friend (she pushes back against it, thankfully) and who uses his good looks and popularity to get by. But he also genuinely cares for his friends and family and unlike many others, he even cares for those in transit through Portero. I loved seeing everything that was hiding behind Jimi's bravado just as I liked being back in Portero.