Payback Time: An Ex-Con Finds Himself Trapped in a Bad Deal 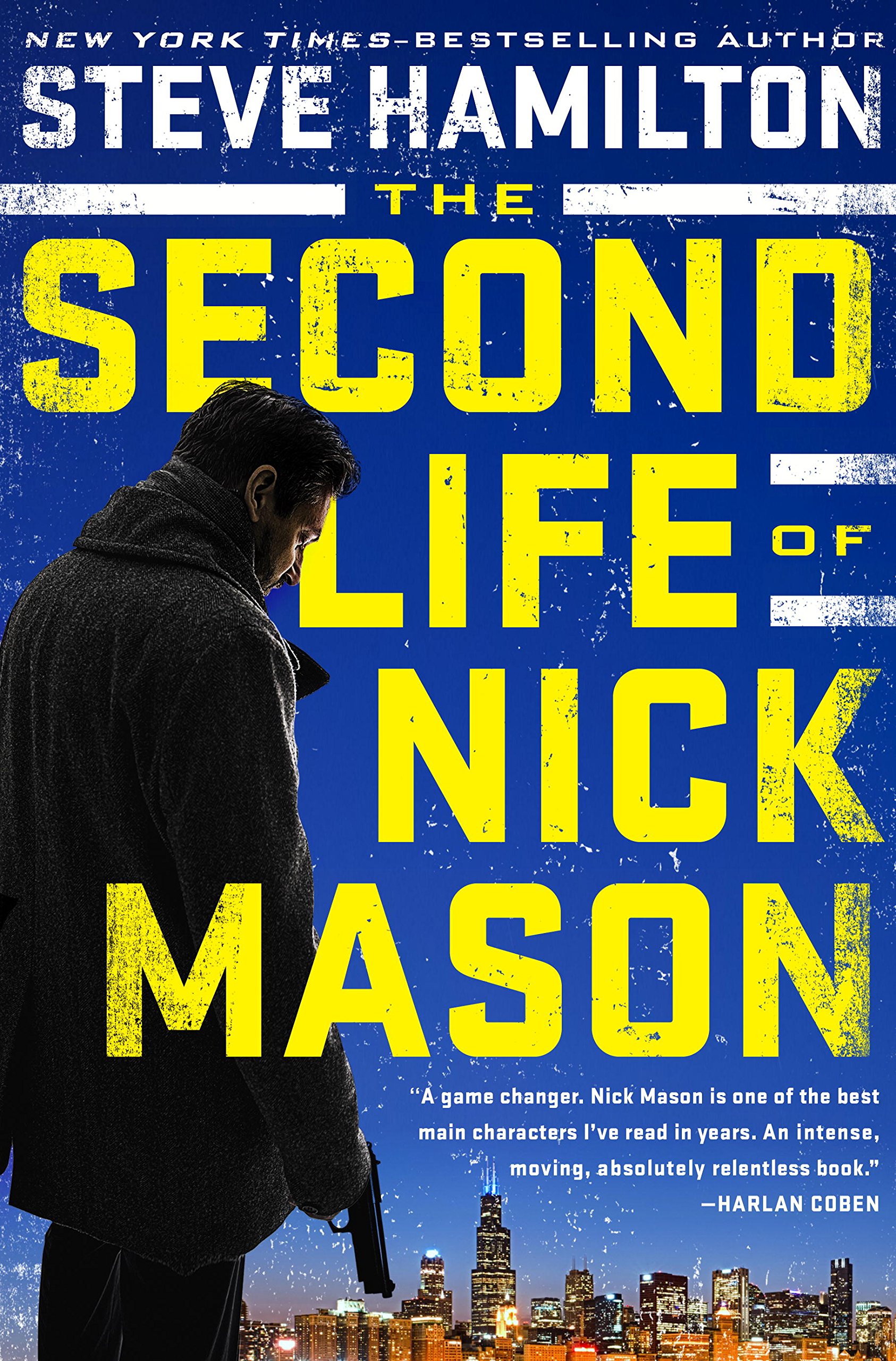 Steve Hamilton seems to have switched sides of the law, gone determinedly criminal. After spending almost two decades writing—and collecting awards for—his series about baseball player-turned-reluctant sleuth Alex McKnight (Die a Stranger, Let It Burn), the now 55-year-old New York author has chosen to devote himself, at least for the near-term, to plotting the execution of nefarious deeds rather than the investigation of such offenses. He swerved off in this direction before with his 2010 standalone novel, The Lock Artist, about a particularly proficient safecracker. But in The Second Life of Nick Mason—a briskly conveyed new thriller that Lionsgate Films has already acquired for potential big-screen treatment—we’re offered the opening chapter in what Hamilton hopes will be a succession of tales featuring an ex-con who has won his liberty only by selling out his future to a Chicago underworld leader.

Nick Mason was a “half Irish, half-whatever kid” who grew up, fatherless, in one of Chicago’s rougher South Side neighborhoods, progressed from boosting cars to robbing drug dealers, and eventually tried to pull off one heist too many—a harbor job that earned him a 25-year sentence, resulted in the slaying of a federal agent, and lost him both his family and a childhood friend. Half a decade later, while trying to do his time quietly at a maximum-security federal penitentiary in Indiana, he’s summoned into the company of Darius Cole, a remarkably privileged, middle-aged black fellow inmate who, though he’s serving two consecutive life terms, still operates a broad-reaching criminal empire outside the prison walls. He makes a devil’s deal with Mason: In exchange for engineering his early release, Mason will become Cole’s special “warrior,” ready to do the crime boss’ bidding—no matter when Cole asks or what violence he expects the younger man to commit.

There are serious upsides to this contract: new digs for Mason in a chic Lincoln Park town house, a captivating but mysterious roommate, plenty of spending money, a cover story as a restaurant manager, the keys to a classic Mustang, and the opportunity to reconnect with his 9-year-old daughter, Adriana. Yet the negatives are equally significant—as Mason discovers when he’s told to murder a man connected to an elite task force of narcotics officers who may have become too powerful for anybody’s benefit. As Mason’s assignments grow ever more dangerous, he’s pursued by Frank Sandoval, the homicide detective who once took him down. At the same time, our “hero” seeks to abrogate his agreement with Cole…and steer clear of dirty cops determined to scratch him off their worry list. In Hamilton’s hands, Mason turns in a performance that is at once dramatic and poignant. He’s the man in the Gilded Cage, hungry for a new life, new love, a new relationship with Adriana—yet for all the benefits he enjoys, he’s not the master of his own fate, but more a monster of Cole’s creation.

I asked Hamilton recently why he launched this new series and how he sees it evolving.

You seemed to have a good thing going after 10 Alex McKnight novels. So, why switch to another series protagonist? What do Nick Mason’s adventures offer you that McKnight’s did not?

After 10 books with Alex McKnight, I was itching to try something new, just as I had done with Michael the young safecracker in The Lock Artist. But in this case, I wanted to develop a fully committed career criminal, and see if I could still create that bond with the reader—just like the great Donald Westlake did with Parker, one of my favorite series ever. I was working with Shane Salerno by then (he’s my agent, as well as a screenwriter and producer—he’s writing one of the Avatar sequels, and he’ll be producing the Nick Mason film along with Nina Jacobson of The Hunger Games franchise for Lionsgate), and he had already been working in this same space. Our ideas collided and the result was Nick Mason, this main character who makes a deal to get out of prison 20 years early. He’s back on the streets, but he’s anything but free. If you think about it, that basic premise can take this character anywhere.

Mason spends a lot of time in Second Life trying to figure out why criminal mastermind Darius Cole recruited him. Even Cole has a hard time explaining it to Mason, saying, “Maybe you’ll have to find out for yourself what it is I see in you.” From your perspective, why did Cole think Nick Mason capable of undertaking the sometimes brutal tasks he assigns him? After all, Mason’s criminal history is primarily nonviolent.

That was Mason’s history, yes. But a man like Darius Cole operates on a whole different level of human psychology. He sees things in people that they don’t even see themselves, which is a big part of how he survived his upbringing in [the Chicago neighborhood of] Englewood and then rose to such a high level in the crime world. When he chooses Mason as his samurai, he’s using that same level of wisdom and discernment that he’s carried his whole life. There’s no way to logically explain it. He just knows. How Nick Mason will finally find these things in himself is for me one of the most interesting questions in the book.

McKnight has always been loyal to his friends, and some of his cases have turned on that fact. Now, in Second Life, we see Nick Mason being the same way, lamenting one buddy who died during the heist that sent your protagonist away to prison and protecting another from prosecution. How important is friendship in your own life, and are you as loyal to your old compatriots as McKnight and Mason are to theirs?

That’s a good observation, because it’s one of the most important things these two have in common. For me, it goes to the very core of what makes a man who he is (whether he’s a criminal or not): Can you rely on him when it really counts? In my own life, I’ve had a group of friends literally since grade school, and we’re still close, even though we live in different parts of the country. If I needed one of those guys, they’d drop everything and come running. And I know I’d do the same for them.

It’s very common in modern crime fiction to pit the protagonist—be he an independent investigator or some variety of lawbreaker—against a determined cop, someone whose opposition helps define that lead figure. You’re doing this same thing with Detective Frank Sandoval. What does Mason’s antagonistic relationship with Sandoval reveal about both of them, and how do you see their association evolving over time?

It’s an essential relationship that really defines both men—both in the contrasts and in the similarities. They’re put in opposition to each other, just by virtue of their professions, and in a way each man is the biggest problem in the other man’s life. At the same time, each may be the only man who can truly understand the other. You can see probably the most effective use of this dynamic in the relationship between Neil McCauley and Vincent Hanna in Michael Mann’s amazing crime film, Heat. Everybody knows the famous diner scene—based on an after-hours meeting, by the way, between Michael’s good friend Chuck Adamson, a Chicago detective in the Major Crimes Unit, and the real-life Neil McCauley, who Adamson was hunting down and eventually killed. But if you watch that whole movie, you realize that it has to end the way it does, with McCauley and Hanna together in the end. As for how the relationship between Mason and Sandoval will evolve, just keep reading!

The McKnight series is generally told against a cold, small-town backdrop in Michigan’s heavily wooded Upper Peninsula, with occasional forays into McKnight’s former hometown of Detroit. Is it an enjoyable break for you to set the Mason stories in Chicago?

As much as I love the Upper Peninsula, you never want to get stuck in one setting. Chicago is a different world, even if it’s on another Great Lake. I spent a lot of time there, trying to understand what makes Chicago different from every other city in the world. And it’s heartbreaking, all of the violence and corruption they’re experiencing there now. But it’s still a great city, and I always look forward to going back.

What sorts of research did you have to do, and through whom, to get the prison scenes right in Second Life? And are there really such differences in the way some well-connected inmates, such as Darius Cole, are treated at Indiana’s United States Penitentiary, Terre Haute?

I’ve spent time in maximum-security prisons—it’s an amazing experience, something you’ll never forget. No matter what prison you’re talking about, there’s always going to be a certain social strata. It’s just inevitable. Talk to any corrections officer, ideally over a beer when they can tell you what the job is really like. Every inmate sets his own rules and boundaries very quickly, and even the guards will recognize and respect that.

Last year, you ditched your longtime publisher, St. Martin’s/Minotaur, in order to strike up a four-book deal with Putnam. Does that mean four Nick Mason novels? Or can fans hope to see another McKnight yarn soon?

Alex will definitely be back. I can’t imagine ever not wanting to know what he’s doing next. He was there from the beginning, and in a way I owe everything to him. When the next McKnight book does come out, I think readers can expect the series to be revitalized, while still retaining everything they loved about this character in the first place, just like I did.

What sort of story will you be telling in the second Nick Mason novel, and does that book have a title yet?

I’m deep into that book now. There’s no title yet, but as I said at the beginning, if you think about this situation that Nick is in, having to answer that phone and do whatever he’s told, it means that this series can really go anywhere. That’s the thing I’m looking forward to, not just in the next book, but in all of the books after that. (And honestly, I can see at least seven of them right now.)