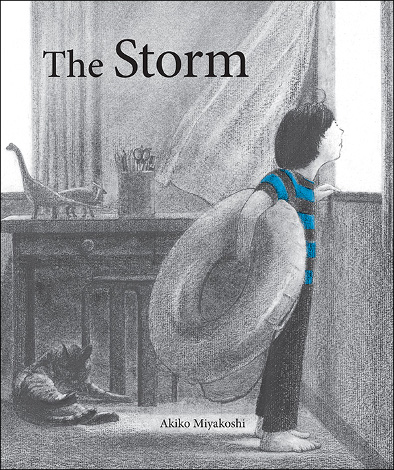 Nearly a year ago, at my own site, I wrote here about Japanese author-illustrator Akiko Miyakoshi’s first picture book to be translated into English. It’s called The Tea Party in the Woods, which was named a Kirkus Best Book of 2015, and it won me over. It helps that it was illustrated in charcoals, my favorite medium in picture books, but the story of a girl’s dream-like trek through the snow and surreal visit to a sprawling, mysterious home in the woods is also, as I wrote at my site, pure magic.

Now Kids Can Press, who released Tea Party, brings readers The Storm, which was Miyakoshi’s first children’s book – and also the recipient of Japan’s Nissan Children’s Storybook and Picture Book Grand Prix, a competition organized by the International Institute for Children's Literature-Osaka for aspiring children’s book writers and illustrators. Originally published in 2009 in Japan, I find this story just as captivating—and, once again, Miyakoshi brings readers fantastic charcoal drawings.

It’s a book about a topic that brings children all over the world a moderate amount of anxiety – dangerous, stormy weather. The story is told from the point of view of a boy whose parents have promised to take him to the beach. The big day is tomorrow, and he’s excited. But before heading out from school that day, his teacher tells everyone to be sure to head straight home, because a bad storm is coming. The boy, who was really pumped about that trip to the shore, heads to his house—only to stare at darkening skies with his parents. In fact, his mother and father get busy, bringing plants inside and closing shutters for the impending doom. The disappointed boy mopes and, as he eats dinner and gets ready for bed, he tries his best not to let the driving rain and thunder rattle him.

Suddenly, the boy finds himself wishing he could eradicate the storm—and, given that he’s just hopped into bed, it’s clear he dreams the grand adventure. He imagines himself in a glorious boat with giant propellers in the clouds, trying to “drive the storm away.” The boy is, figuratively and quite literally, navigating his way through his feelings about the storm. The ship “sails into the black clouds. I keep watch.” He takes complete control of the imaginary boat—through four dramatic full-bleed spreads—until he’s on the other side of the danger in “clear skies.”

In the morning, there is sunshine and, in the only spread with any color other than the grey charcoal tones, bright blue skies—just the right weather for a trip to the ocean. In the final illustration after readers turn the page, we even see puddles in the street, reflecting the warm blue of the skies.

What Miyakoshi does with light in these charcoal renderings of high clouds in a dark sky with the sun struggling to peek through is striking and beautiful. I’m not an artist and am unsure of how she pulls it off, but I can enthusiastically appreciate the results. She places readers right with the boy in many spreads, as if we’re with him at the dinner table, next to his bed in the bedroom, and right by the phantom ship’s crow’s nest, as he climbs up “just before the ship is swallowed by darkness.”

What the boy encounters in this massive storm, though only in his mind’s eye, takes great courage to stare down. Children will enjoy the exhilarating adventure of emotional highs-and-lows and feel the immense satisfaction of a long-awaited day at the beach—with sunshine, blue skies, and all.

I can’t wait to see what Miyakoshi does next.