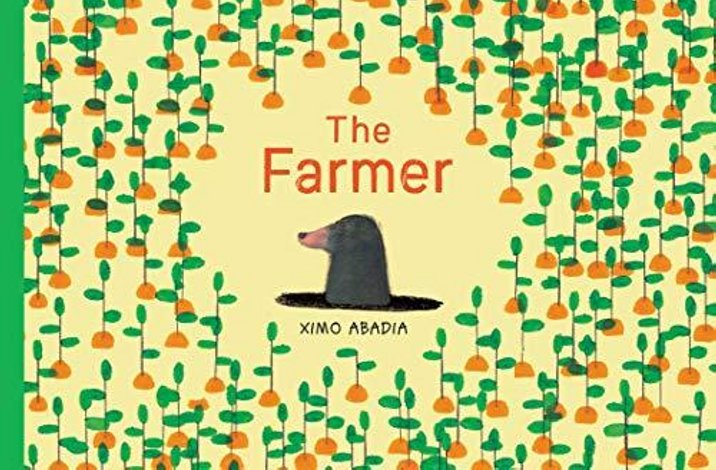 It’s been a while since I’ve done a Picture Book Happy Hour, an idea I stole from one of my favorite podcasts. This is where you ask the people around you: What’s making you happy this week? In the realm of picture books, my responses involve a Swiss import, a new piece of nonfiction, and a new fiction book that is one of the most visually appealing books you’ll see this year.

Let’s start with the picture book import, which is a breath of fresh air in a sea of glossy American picture books that sometimes run together in my vision. The Farmer, written and illustrated by Ximo Abadia, was originally published in French in Switzerland two years ago and has been translated by Grace Maccarone and Kelly Loughman. Abadia is a Spanish author, illustrator, and graphic novelist.

This is the story of Paul the farmer, hard at work to grow his crops. While his village rests, he’s mowing, raking, digging, and drawing water until he wears himself out. In one spread, in which we read that he “watches, inspects, checks,” we see a series of holes in the ground. The heads of moles pop out of two, but in the others we see Paul’s distinctive head, decked out as it is in a tall, black hat. Paul, the whack-a-mole, on the move. It’s very funny. He’s nothing if not diligent.

Things begin to grow! Then things start to dry up. Isn’t that the way of life? “Paul despairs.” But the animals on his farm band together to help him. Mind you, this isn’t, say, the explicit moral of the story. It’s quick. It’s subtle. We see their silhouettes in one spread, which states “But Paul is not alone ….” On the next full-bleed spread, we see only raindrops (save a small snail on the recto), because Mother Nature is on his side too. At least for now. “[H]is friend the rain is never truly far away,” Abadia writes.

Paul is rendered as a large teardrop shape in vivid red overalls. He has a tiny head and two flat, protruding feet. Abadia plays creatively with scale; in one wordless spread, we see a massive sun in the center, its rays dominating the composition, and Paul’s house may as well be a tiny dot on the horizon. The final (and triumphant) spread shows a village with vibrant crops all around. This offbeat import, dry-humored and sweet, is an ode to persistence.

Speaking of Switzerland, for one of the best picture book biographies you’ll see this year, which has been met with a whole host of starred reviews, turn to Jan Greenberg’s and Sandra Jordan’s Two Brothers, Four Hands: The Artists Alberto and Diego Giacometti, illustrated by Hadley Hooper. Greenberg and Jordan have an impressive track record with bios about artists: Together they penned Action Jackson; Ballet for Martha: Making Appalachian Spring; The Mad Potter: George E. Ohr, Eccentric Genius; and Meet Cindy Sherman. Most of these won Sibert Honors. We’re in good hands with these two.

This captivating and accessible 64-page biography (with detailed backmatter) introduces us to famed artist Alberto Giacometti and his brother Diego in the year 1901; they are boys in the Swiss village of Stamps, born only one year apart. The authors take us through their childhood and follow their lives all the way up until Alberto’s death—with an emphasis on their distinctive personalities (Alberto as more of a dreamer and Diego, more of a daredevil); Alberto’s career as an artist; Diego’s own career as a metal worker and furniture-maker; and the ways in which Diego, putting Alberto’s art before his own, supported his brother. The brothers, after all, are “tied to each other as if by some secret understanding.”

Hooper’s mixed-media illustrations—with vibrant blues, pinks, golds, and greens and strong, beguiling lines—are simply exquisite. Take the spread depicting Summer 1940 in Paris. Scratchy lines bring texture to the ground, and drops of paint and lighter brush strokes depict “burning towns” in the distance; German troops have invaded Paris and “planes drone overhead,” while the brothers flee the city on bikes. An ominous red dominates the sky. Her depictions of Alberto’s iconic sculptures are loose-lined and impressionistic. On the book’s final illustration, we see the brothers walking together, the sun in front of them. Their shadows cast the kinds of elongated shapes of Alberto’s sculptures. It’s a poignant illustration—and the perfect way to end the book.

Finally, don’t miss Micha Archer’s newest picture book, Daniel’s Good Day, a companion book to her Ezra Jack Keats Award-winning Daniel Finds a Poem. With a palette featuring rich, luminous colors (which remind me of the work of Vera B. Williams) and remarkably detailed and textured illustrations, we follow a boy named Daniel through his neighborhood one sunny morning. After his mother tells him to “have a good day,” he heads down the sidewalk to Grandma’s house, and Daniel asks the people he passes, “what makes a good day for you?” The girl with a kite thinks a “steady wind” makes a good day; Mrs. Sanchez, painting the side of a house, likes clear skies; the woman driving the bus appreciate good manners; and the crossing guard tells him that “everybody home safe” is what constitutes a good day for him. The story comes full-circle as, later, Daniel heads home with Grandma and takes in a happy neighborhood, complete with wind, clear skies, and—as he tells his mother upon arriving at the house—“everybody home safe!”

This is a picture book to read leisurely. Archer, a former kindergarten teacher, works in oil and collage, using homemade stamps and tissue paper. The artwork is intricate, layered, and truly vibrant. Daniel’s Good Day is 32 pages of sophisticated artistry—and an endearing, affectionate story about community.