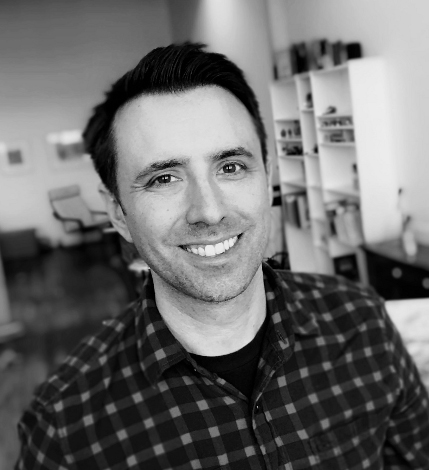 Author-illustrator Jarrett J. Krosoczka has a surprise for readers this fall. Though he’s made a career for over a decade now as the author-illustrator of more lighted-hearted picture books and comics, from Punk Farm to Lunch Lady, he now has a story for older readers. Hey, Kiddo, a graphic novel memoir coming this October, is the unflinching tale of his own childhood. As a boy and teen in the care of his grandparents, Krosoczka struggled to understand his mother’s drug addiction; yearned to find and know his father; and discovered the curative role of art in his life. It’s what the Kirkus review calls an “honest, important, and timely” story.

I talked to Krosoczka via email about what it was like to tell this difficult story, one he first shared with the world in his memorable 2012 TED Talk.

Jules: Hi, Jarrett! I love the new book. And congrats on all the starred reviews.

Jarrett: So glad you like it. As you know, it is very different for me.

Jules: It surely is. What is it like for you to reach out to an audience of readers who are older than what you're used to?

Jarrett: Well, the amazing thing is that this audience is my old audience. Kids who read Good Night, Monkey Boy when they were toddlers were then reading Punk Farm in their early elementary school years — then reading the Lunch Lady graphic novels when they were in upper elementary. And they are all now in their middle to upper teen years. It has been such a beautiful thing, watching these readers age up alongside my work.

Jules: I hadn't even thought of that.

Jarrett: What has been the biggest difference with Hey, Kiddo is messaging out to caretakers of current readers of my younger work that this book is much heavier in subject matter. At BookExpo, the first event where I signed ARCs for this book, whenever an adult asked to get the book signed to their kid because they were big Lunch Lady fans, I would ask if their kids were reading Lunch Lady now or five years ago. That being said, I did meet a ten-year-old at San Diego ComicCon who had read the book a few times already. There are some hard truths in this book and, thanks to my grandmother, some salty language, but under middle-school aged, I would say it would depend on the reader.

Jules: Was it painful to mine so many childhood memories for this story, given that it wasn't always easy for you as a kid?

Jarrett: There were some very difficult childhood memories to relive. I actually rented out a studio outside of my home so that I wouldn't have to go into those mental spaces with my family around. The best I can describe it would be to tell you it was like the scene in Harry Potter and the Order of the Phoenix where Professor Umbridge punishes Harry by making him write lines over and over with a Blood Quill. Every time Harry writes something on paper, the words get seared into the back of his hand. So there were moments when it was painful and difficult to make this book. My beautiful studio space would get transformed into that small kitchen in Worcester where difficult moments played out. That being said, there were also many wonderful moments to relive. Those scenes brought me great joy, and when the book was finished, I sort of had to mourn the loss of my grandparents all over again. It was truly a gift to spend that time with them again.

Jules: When I finished the book, I was immediately struck by the grace with which you responded to your grandmother. She was loving to you and a lifesaver in many ways, but she could also be harsh with you. I don't know that I have a question here. It struck me how you were able to come to a place of forgiveness with those aspects of her personality. I thought it was a beautiful thing, but I'm sure it wasn't always easy.

Jarrett: Oh, man. Yeah, Shirley was complicated. She would be, as my grandfather would describe, "a real hot shit." One thing I certainly have learned as I have aged is that people are complicated, and life does not play out in black and white. I give a nod to the varying shades of grey with the artwork in this book and wanted to with the way I portrayed my loved ones. Shirley was very self-aware, which made it easier for me to be honest and transparent with her character on the pages. And it was a tightrope walk, because as much as I wanted to show how difficult she could be, I also wanted readers to like her. At her core, she had so much love to give, even if she would tell you to "go shit in ya hat."

Jules: Can you say more about what you just said about the artwork and the use of grey in the book? Are you saying you used shades of grey to help communicate character?

Jarrett: The grayscale is a nod to my realization that life isn’t black and white. People are incredibly complicated and multidimensional. All of the line work was created with traditional pen and ink, and then on a separate piece of Bristol board I created ink washes. The two pieces were then spliced together in Photoshop using registration marks, just like printing was done back in the day. And then I used digital tools to add the burnt orange tones and word balloons.

Jules: Have you ever created more art for one book? This was a lot. And what was it like to draw the young version of yourself — and at various stages of your life?

Jarrett: Oh man, it was a Herculean effort getting all of this art finished. This photo represents the final script, preliminary sketches, every page of inks, every page of greyscale washes, and the spreads of digital touches printed out:

It wasn’t terribly weird drawing myself, because growing up as an artist, you are constantly being asked to draw self-portraits in art classes. It was weird, however, referring to myself as a character throughout the editing process.

In the years leading up to executing the art for this book, I would draw from life every day to both loosen up my style and hone my drawing skills. (I posted these sketches to Instagram and hope to get back into the swing of this discipline soon.) I’m surrounded by my pugs and my children, so that is often what I would draw. When I then turned to photo references of me as a kid, I was astounded at just how much my children are the spitting images of me when I was their ages. So, in a weird way, I was training for character design as well.

Jules: One of my very favorite themes (in books, film, music, you-name-it) is the power of art to heal. This is a prominent — and moving — theme in your book. Where do you think you'd be today without art?

Jarrett: I honestly don’t know where I’d be without art. And I’m not just talking vocation-wise. Sure, I centered my profession around art, but it is far more profound that art helped me deal with and process all of the chaos that surrounded me.