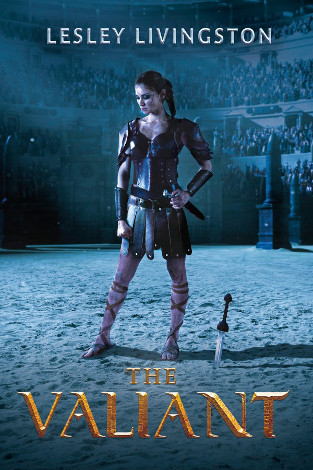 At first, I was going to talk about how the young woman on this cover looks like a gladiator, which is fitting for a book about a young, female gladiator. But then I spotted the column in the background with its, uh, masculine shape.

Fallon is the daughter of a Celtic king, but she’s no pampered princess: in her tribe, the women are terrific warriors who fight right alongside the men. Fallon’s trained for much of her life to become a warrior and is looking forward to joining her father’s War Band. Unfortunately, Fallon’s captured by slavers and sold to a Roman gladiatorial training school, where she’ll fight for the glory of Julius Caesar … who just so happens to be her greatest enemy.

Not only does Fallon have a cool name and a pretty awesome upbringing—I mean, growing up in a tribe in which women are seen as equals to men is a pretty sweet deal for the late BC time period (or any time period, obvs)—but also she’s a total badass and person who would literally fight anyone who does her friends wrong. She’s not the most levelheaded of individuals, and is quick to lean on her warrior training to solve her problems, but in a world like Fallon lives in, it wouldn’t be a bad idea to have that friend who’s willing to throw down at a moment’s notice. In this modern age, she might be a bit more of a liability, but I can overlook that.

Becoming a slave, traveling halfway around the world to a strange city and then being forced to fight in a gladiatorial arena might not suggest that Fallon would have a lot of free time to find a relationship. But fate is a tricky mistress, and love frequently comes a’knockin’ when you least expect it.

With the exception of unusual names, both of members of Fallon’s tribe and people in Rome, and a few terms specific to the time period in which The Valiant is set, Lesley Livingston’s writing doesn’t scream historical fiction. That’s not a pro or a con, per se—I don’t know if I would have enjoyed this book nearly as much had it been written in old Latin—but a statement on how it can be difficult to write novels set in such a disparate age. Livingston’s characters, again, with the exception of their roles as gladiatrices, feel like they could be people I might run into on the street (albeit a little more vicious). Personally, I thought this made Fallon’s story more relatable, but the fact that she and her friends seemed like my contemporaries did make it hard to lose myself in the history of it all.

Historians are unsure if male gladiators had female counterparts, but it’s awesome to think that such ruthless, talented women existed. I love Livingston’s take on them, too; in The Valiant, they’re valued as much, possibly more, than their male counterparts, and they get to be the main attraction in many gladiatorial “pageants.”

Bonus reading: “Did female gladiators exist?” via the BBC.

Cleo makes cameo appearances in The Valiant, both at Caesar’s side and on her own. From the little I know about her, I totally believe that she’d be a patron of gladiatrices.

I’m ready to go to battle with you, Book. I might be awful wielding an actual weapon, but you’ve inspired me to want to fight along our sisters, and I’m willing to put in the hard work to do them justice.

The Valiant is available now.