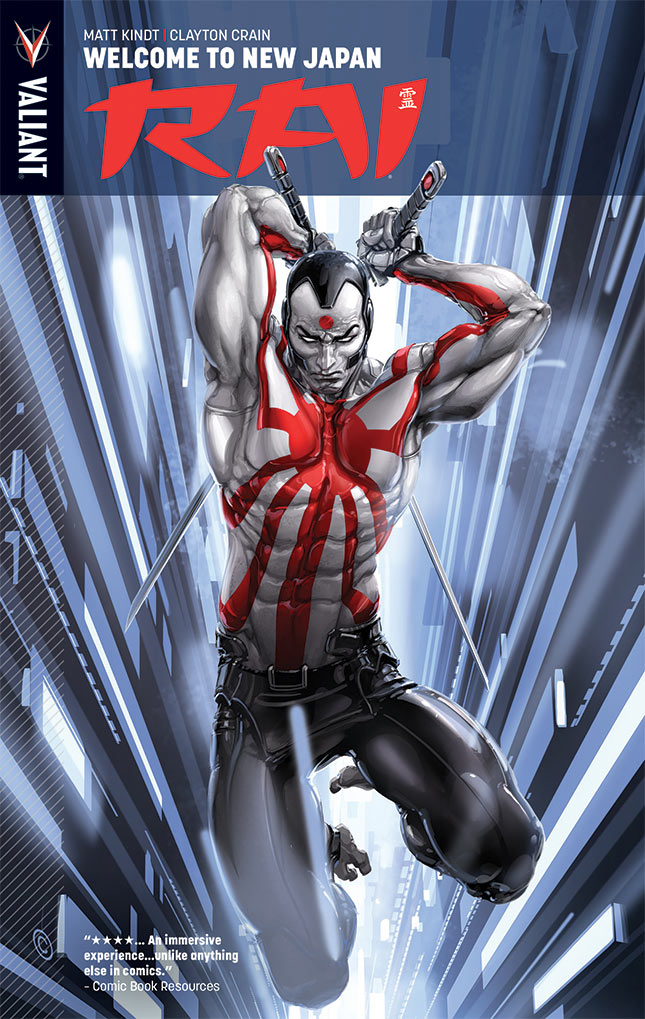 This week, as I am recovering in the second week of con crud–induced plague, I decided I wanted some science fiction. Reaching into the mountain known as “To Be Read,” I came up with an intriguing book filled with science-fiction goodness and some of the craziest and intense art I’ve seen in a while.

Rai Volume One: Welcome to New Japan is full of dense details, nuances, and mysteries. Set in the 41st century, Japan is a massive city filled with diverse sectors built one atop another. Humans are given PT’s (Positronic minds) as companions when they turn 16. These artificial life forms serve as companions until and unless Father allows you to have children. They grow with their human masters and serve them. Father runs New Japan, protects it, provides for it. Some think Father is just a legend, others a god, and some think him the devil. His touch is felt most keenly through Rai, a legend in his own right, protector, warrior, judge, jury and executioner. Rai is tied to Father and, ultimately, to Japan itself. He can teleport within the city levels and sectors, mete out justice in Father’s name, and is nearly impossible to kill.

For over a thousand years, Japan has thrived, surviving catastrophes and wars. And Rai is always on the front lines. When Father needs to enforce his will upon Japan, Rai is there.

When a human woman is murdered, the first murder in centuries, Father sends Rai down into Japan’s lower sectors to investigate. The Raddaito, known as Raddies, are moving against Father, which means they’re moving against Japan, and Rai cannot allow that. They may also be responsible for the woman’s murder. It also turns out that Spylocke, a fictional character from popular entertainment programs, might be a real person and is either out to help Rai—or hinder him. There are a lot of mysteries surrounding Rai and Father, mysteries Rai must solve if he is going to save Japan.

Written by Matt Kindt with art by Clayton Crain, Welcome to New Japan is an interesting read. The characters are developed well and keep you guessing as to their motives and loyalties. The twists were surprising enough that I didn’t see all of them before they happened. I really like the worldbuilding and how quickly and easily we as readers are slipped in and brought up to speed. Obviously, there’s a lot of background history here given that the story is set in the 41st century, but it never feels bogged down by that history.

The art is simply amazing. It’

s detailed and lush. No corners are cut anywhere and I kept turning the pages, studying them, drinking them in. It reminds me of manga in the level of detail and styles being used—which is all good in my book. At times it can be pretty crazy, drawing your eye to every corner of the page as you try to figure out what you should be paying attention to first—which is also all good in my book.

If you’re looking for a far-future science-fiction epic, this is the book for you.

This book brings together the first five issues of the regular comic and includes the covers from those comics, and a gallery of variant covers and sketches.