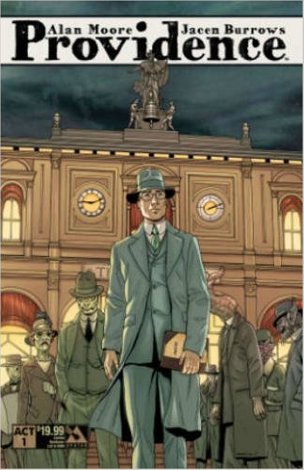 Lately, I’ve been trying to dip my toe farther into horror than I have in the past. Like Joey on Friends, I’ve felt the need to put a book or two in the freezer to be safe from them. I love horror movies, but horror books have always freaked me out. Which brings me to Providence: Act 1 from Avatar Press, written by Alan Moore and illustrated by Jacen Burrows, a dense and moody story of the early twentieth century mixing shades of Lovecraft with American history.

Robert Black, a journalist at the New York Herald, has always felt he had a book inside of him waiting to come out. All he lacked was the proper idea. On the scent of a

story to fill half a page in the next edition of the Herald, he stumbles across a tale of mysticism, occultism, and history that hooks his imagination. He follows it to Dr. Alvarez, a man living with a mysterious disease in a frigid apartment, who claims the cold keeps the disease in check. From there, Black is on the trail of a rare alchemical text, which leads him further and further into the darkness.

And, yes, there is darkness. It’s slow. Methodical. Wrapped in social and religious subtexts. Robert catches glimpses of the darkness. A moment in the basement of an occult scholar that may have been the result of gas leak, or may have actually been a subterranean lake haunted by a monster. Or maybe he’s just going crazy.

That thought kept going through my mind – sort of like when I watched Mr. Robot – where does reality end, and delusion begin? How much of the story is his imagination, his book, bleeding over into his investigation?

The book alternates between Black’s investigation and notes and letters, sometimes handwritten, sometimes typed, and not always attributed, plus flashbacks. We see glimpses of his childhood and relationships past and present. There are complex and modern ideas and themes here, including but not limited to sexuality and identity, religion and history, and how these things intertwine.

As horror stories go, this one builds slowly and is never quite in your face. There are moments where it amps up quickly and you want to clutch your throat, but don’t because that would cause you to drop the book.

Everything from the art to the dialogue to the interludes of notes and letters sets the mood and tone for this book. I mentioned earlier that it’s dense, and that doesn’t even do it justice. There are so many references, mentions, names dropped – if it were a novel, it would be epic in scale and scope and probably fat enough to squash small rodents. Moore does an incredible job of delivering tons of information without making it ever feel like an info-dump.

Lovecraft is a heavy influence here. If you’re into those kinds of dark, psychological horrors, consider picking up a copy of Providence.