The Queen of Plagues 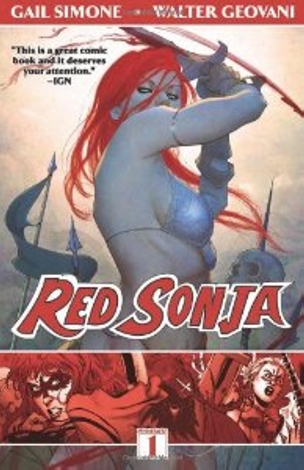 I’m going to be honest here—I never read any of the Red Sonja comics growing up. Heck, I barely read any of the sword and sorcery stuff out there on the shelves. Mostly because they were in a section of the comic book store—or in my comic book store, at least—where you had to be 18 in order to buy anything. Plus, I was mostly focused on the superhero comics constantly pumped out by DC and Marvel. This means that my first exposure to the character Red Sonja came in the form of the 1985 movie starring Brigitte Nielsen and Arnold Schwarzenegger.

As you might imagine, I was not inspired to go out and consume all the written material based on that movie.

I continued to not be inspired by the character as the years went by and rumors of this movie reboot or that movie reboot came and went. I knew the character was tied to Conan, and thought Arnold had actually played Conan in that ’85 flick. He didn’t. His character’s name was High Lord Kalidor. Go figure. Various comic book incarnations and reboots happened throughout the years. Marvel published Red Sonja well into the ’90s. Then came a few others until Dynamite Entertainment picked up the license. Even then I didn’t summarily pick up any of the comics.

What did finally get me interested? Gail Simone. Simone is one of those rarities in the comic book universe—a female comic book writer working in the mainstream industry. Sure, there is plenty of diversity in the indie sphere, but mainstream comics tend to be slow to adopt change. Simone’s work on DC’s Birds of Prey, Wonder Woman and Batgirl have all been praised far and wide. So for her to take up a character like Sonja, well, that got my attention.

Red Sonja of the Marvel days was a character who was too weak to lift a sword and unable to defend herself or her family. So she is raped, prays, and then a goddess bestows upon her the ability to fight as long as she doesn’t have sex with anyone unless they beat her fair and square in combat. Contrast that against Conan (and all the other male barbarian clones) who regularly had sex and your double standard alarms might start going off. Immediately. If they don’t, we probably need to chat sometime.

Knowing this made me want to read Simone’s take on the character even more. Within the pages of Red Sonja Volume 1: Queen of Plagues, we do get a reboot of the character.

No rape here. No goddess. We see flashbacks of her early days. Her father teaches her to hunt. The arena teaches her to fight. This Sonja is not helpless She is fierce and determined. Strong.

This book gripped me. The story is simple enough; Sonja is recalled to a land where she was once held slave and forced to fight in the pits. The man who freed her, the only King she has ever knelt to, needs her help. And she considers it a blood oath to do whatever she can for him. His people have been stricken with the plague, his army decimated, and another army is on the way to destroy them. Can Sonja rally his people, train them and beat back this invading force?

The art, done by Walter Geovani, is dark and fits the material like a gauntlet. See what I did there? The covers from the comics are here, including the variant covers—all are gorgeous. My favorite just might be the Fiona Staples variant. And yes, Sonja wears the metal bikini. And yes, it’s stupid and impractical. But I sort of forgot about it as I got into the book. And eventually she wears a full set of armor including a helm. So there.

Simone takes us into Red Sonja’s head and provides with a different character. “A modern take” is the phrase that kept rattling around the ol’ brain. She isn’t weak. She doesn’t have her powers because someone used magic to give them to her. She isn’t a secondary character. She earns everything she has, good and bad.

She is Red Sonja. The She-Devil with a sword. And you should go read her story.

Patrick Hester is an author, blogger and 2013 Hugo Award Winner for Best Fanzine (Editor - SF Signal). He lives in Colorado, writes science fiction and fantasy, and can usually be found hanging out on his Twitter feed. His Functional Nerds and SF Signal weekly podcasts have both been nominated for Parsec awards, and the SF Signal podcast was nominated for a 2012, 2013, and 2014 Hugo Award. In addition to his Kirkus posts, he writes for atfmb.com, SF Signal and Functional Nerds.