We talk to Darnell Moore, author of "No Ashes in the Fire" 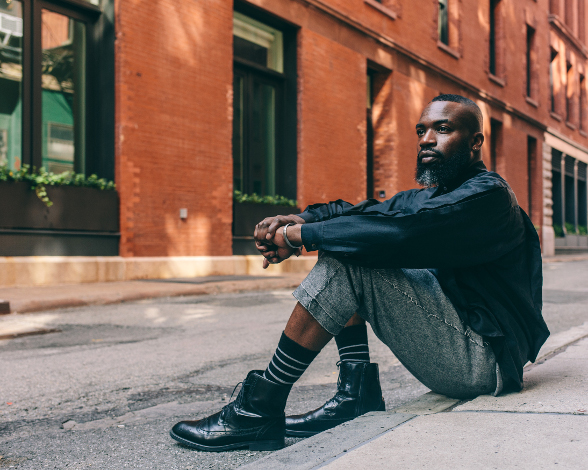 In his rousing memoir, journalist Darnell L. Moore recounts his political, philosophical, and sexual emergence as a young, queer black man—traits, which he explains, that make him a kind of magician. Our reviewer calls No Ashes in the Fire “an engaging meditation on identity and creativity within challenging settings.” We talk with Moore about growing up in Camden, New Jersey (“a place of joys and discontents”); the revolutionary act of love between black men; and his documentary on black LGBT life in Atlanta.

How would you describe the Camden of your youth?

When I was a child, most people talked about the city Walt Whitman once described as an “invincible city”—as if all hope of its return to glory had been zapped by the presences of Black/Latinx people who resided there. Camden was, like many post-industrial and post-white urban cities that are now predominantly Black and working-class, a home place that the media depicted as the “ghetto.”

The crack epidemic raged on. The jails and prisons were bloated—full of residents. The political machine was dysfunctional. And the “war on drugs” was active. Many of our streets were lined with trash and shards of glass, and dilapidated homes and cement landings remained where buildings once stood; but happy children played hide-and-go-seek, neighbors cared for each other’s properties (rented or owned) as if they were their own, and close-knit families held dance contests. The Camden of my youth was a place of joys and discontents; undying hope and hopelessness; beauty and violence.

Your memoir is an “attempt at joining a chorus of voices who have tried their best to narrate the beautiful and messy complexities of race, gender, class and sexuality as they collide and are expressed in the contemporary United States.” Did you struggle to find the best format for these ideas?

One of the most difficult aspects of writing this book was deciding on its form. Pairing life narrative with social history was challenging. I decided to organize each chapter around themes, and the structure came in response to that.

You compare black men who love other black men to “cunning magicians.” Can you say more about that?

To love what and who you’ve been taught to hate...to give what has been denied you...to do what you have been socialized to believe is wrong...is a radical and magical act. Joseph Beam stated that “Black men loving Black men is a revolutionary act.” It is. And it is also magical.

Black queer, trans, and gender nonconforming people are so often silenced. What gave you the strength to tell your story and be heard?

Cullors, E. Patrick Johnson, James Earl Hardy, and so many others who have written our lives into being.

“Black same-sex love is revolutionary because we must first convince ourselves we are deserving of receiving and giving what has been denied us for so long.” This and other quotes seem like the product of a long distillation process. Were they?

I spent a lot of time meditating on sentences. I sat, slept, and journeyed with some of the sentences, which were really a combination of varied thoughts that came to me during the span of the writing process.

What queer literature and/or projects are you talking about now?

I recently produced and directed a minidoc series on Black LGBT life in Atlanta for CASSIUS. And I am sitting with a few ideas that may be seeds for a future book. I also just joined Breakthough US, a human rights organization focused on ending gender-based violence, as Head of Strategy and Programs. I have a few things on my plate at the moment.