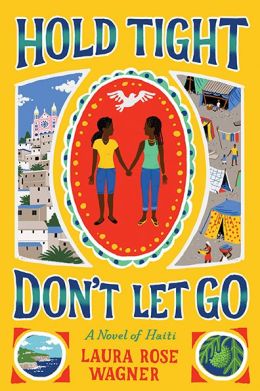 For a moment I want to say: Nadine, hold on to all this. Remember this. Not because it is all beautiful or good—so much of it is ugly and broken—but because it is ours.

As you probably remember, on Tuesday, January 12, 2010, a magnitude seven earthquake hit Haiti. Millions of people were affected: hundreds of thousands lost their homes, were injured, died. The number of bodies was so overwhelming that many of them were buried in mass graves; the wreckage was so extensive that many bodies were never recovered. Survivors squatted for months—and in some cases, are squatting still—in tent cities where food was scarce, sanitation was sketchy and crime was common. Hold Tight, Don’t Let Go is the story of the earthquake and its aftermath as experienced by 15-year-old Magdalie Jean-Baptiste.

For almost her entire life, Magda has lived with her aunt and her cousin—they’ve been a family unit for so long that she thinks of Nadine as her sister and of her aunt as her manman. The three of them live in Port-au-Prince, in the basement of Manman’s employer. When the earthquake hits, Manman is killed, and the girls end up living in a shack made of “plywood, sheet metal, and plastic tarps” with their Tonton Élie, a mechanic who, as Magda puts it, “doesn’t know very much about teenage girls.” Eventually, Nadine’s father secures a visa for her, and she heads off to Miami, promising to fix things so that Magda can move there, too.

At first, Magda is hopeful that they’ll be reunited quickly. But as the days turn into weeks and then into months, she begins to realize that she may have lost more than her mother to the earthquake—she may have, in a more roundabout way, lost her sister, too.

Hold Tight, Don’t Let Go is a survival story, but it’s not a survival story like The Hunger Games or Ship Breaker. It’s less about action-oriented survival—the moments in which Magda faces physical danger are brief and rare (though that doesn’t make them any less harrowing)—than it is about emotional survival, about working one’s way through grief, and about choosing to make your own way forward instead of waiting for life to work its way back towards the familiar.

Wagner’s background as a cultural anthropologist is extremely apparent—so much so that I pegged her as an anthropologist even before I read the About the Author section—in the way that she weaves in details without judgment or commentary, and, best of all, without using American culture as some sort of “norm.” The only time the two were compared, actually, was in the epilogue:

Because in Haiti, so many people are poor, it’s nothing to be ashamed of. And there’s always a way to degaje, to get by, even when you have nothing. But misery in the United States is harder than misery in Haiti. You feel like it’s your fault for being poor.

Religion, cuisine, social stigmas, class differences, urban life versus rural life, Wagner even gave me a feel for the cultural comfort level in regards to jokes about sex and bodily functions. While the English translations of the French and Haitian Creole dialogue weren’t always conveyed in an entirely organic manner, seeing all three languages meshed together on the page was fascinating—and for me, it was nerdily exciting when I realized that my (very basic) knowledge of French was allowing me to translate some of the Creole on my own.

It’s a strong, quiet book, a better pick for someone in the mood for a character-driven story than for a plot-driven adventure. I’m looking forward to what she writes next, whether it follows one of the secondary characters introduced in this book—because every single one of them, no matter how brief the appearance, came off as three-dimensional and real—or is something completely different.