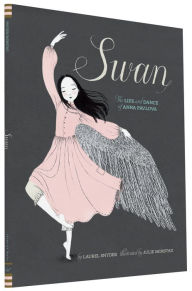 Swan: The Life and Dance of Anna Pavlova, written by Laurel Snyder and illustrated by Julie Morstad, is Snyder’s first children’s book biography, and she leaves no doubt that she can craft such a story well. Pavlova, the legendary Russian prima ballerina, was born in the late 19th century and longed to dance. She was accepted at the age of 10 into the Imperial Ballet School in Saint Petersburg but soon discovered that, as Snyder writes in the book’s closing author’s note, “her body was far from ideal for ballet.”

But she persisted, worked hard, and wowed audiences with her “more dramatic, romantic, evocative style.” And her contributions to dance went beyond her skills as a ballerina, Snyder notes: she also believed that ballet was for everyone. “The world is a hungry place, and Anna will feed it beauty.” She toured the world, sharing her art and talents with not only rich people, but those across the globe who were underprivileged as well.

Readers get detailed information about Pavlova’s life from this closing author’s note, but it’s all the writing before this that shines even brighter. With spare sentences (many at the book’s opening are two or three words long), Snyder lets the story and Pavlova herself—not any overreaching attempts to wow us with writing acrobatics—take the stage. (Bad pun not intended.) There’s also a charming reverence to the writing, several “ah!”s and “oh”s and even a “HUSH!” For instance, right after Pavlova first auditions at the school after being inspired by a ballet she sees with her mother, she’s turned down. What Snyder writes, though, is this:

At last Mama nods, and out of her house Anna goes, into the world of people.

Here the illustration from Morstad—indeed, this must have been a particularly rewarding manuscript to hand over to an illustrator, as it’s text that leaves lots of room for the artist—shows the young Pavlova leaving the building, her head lung low.

And on this spread, Morstad brings us Pavlova in nine different positions, working hard to prove herself. When we read in the text about her body, not deemed fitting enough for ballet, we read: “Her legs too thin, her feet all wrong—and oh, those toes!”

It’s almost as if Snyder is right there with the reader, whispering wondrous, incredulous secrets about this remarkable woman. And the writing on the final spread as Pavlova passes from this world is simply sublime. I’ll leave that for you to discover yourself. It’s pure poetry, one that just may leave a massive lump in your throat, and it’s accompanied by art that is also moving in its simplicity and self-restraint.

This is a beautifully illustrated and designed ballerina of a book—tall and refined even its trim size. There is a texture to Pavlova’s wing on the book’s cover that calls for your finger, and Morstad was an excellent choice for illustrator. Her illustrations—rendered in ink, gouache, graphite, pencil, and crayon—are elegant and sophisticated, some spreads so expertly composed and swirling with grace that they are nearly breathtaking. Case in point:

It’s a beautiful contribution to the world of picture book biographies—and an inspiring story, as Snyder writes at the book’s close, for “all the girls and boys who love ballet [and are] reaching for beauty.”