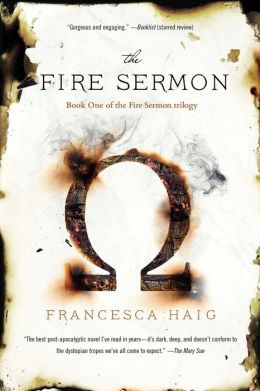 The subtitle of Wicked tells you everything you need to know about what it's about: The Life and Times of the Wicked Witch of the West. McGuire's inventive look at the antagonist from L. Frank Baum's The Wizard of Oz puts the witch, here named Elphaba, in the role of a much more sympathetic character, one who is shunned at birth and treated as an outcast. McGuire depicts an amazingly rich setting in Oz, one that is both atmospheric and mesmerizing.

Even if you've never read the book, it's quite likely that you've heard of Wicked before as it was the basis for the popular Broadway musical. Now, the book is being adapted to film by the producer of the musical (Marc Platt). Director Stephen Daldry, director of Billy Elliot, is attached to the project, which is being targeted for a 2016 release date. Winnie Holzman, the creator of the television show My So-Called Life, is working on the screenplay. She's more than qualified—she wrote the book for the Broadway show.

The Fire Sermon by Francesca Haig

The Fire Sermon is the first novel in a post-apocalyptic trilogy that's being billed as a cross between The Hunger Games by Suzanne Collins and The Road by Cormac McCarthy. It's set 400 years into the future, after the world was rendered a wasteland following a nuclear fire. That danger is gone; however, now every person is born with a twin. One of the twins (dubbed an "Alpha") is perfect in every way.  The other (dubbed an "Omega") has some form of deformity. Society is such that Alphas are privileged and have access to the world's scant resources, while the Omegas are shunned. This is despite the fact that the twins are intrinsical

ly tied together; when one of them dies, so does the other.

If that sounds like your cup of celluloid, you'll be pleased to learn that film rights for The Fire Sermon have already been acquired by DreamWorks. Nicole Perlman, who co-wrote the Marvel’s 2014 blockbuster Guardians of the Galaxy, is set to write the screenplay.

The City and the City by China Miéville

While the plot of China Miéville’s Hugo-winning existential thriller may be about law enforcement investigating a murder, the real star of the story is the book's setting. It starts in the fictional city of Beszel, locates somewhere on the outskirts of Europe. The investigation on a murdered woman leads Tyador Borlú of the Extreme Crime Squad to the sister city of Ul Qoma, a sweeping metropolis which exists alongside Beszel, but unseen without a shift in perception. Borlú works with an Ul Qoman detective to help solve the case, but their investigation leads to much wider implications for the futures of both cities.

Miéville’s gritty, metaphysical murder mystery might soon be headed for television. It's being reported that Tony Grisoni (Fear and Loathing in Las Vegas) is working on a four-part television adaptation The City and the City. The project is being produced by the England's BBC. If you're wondering what weird fiction feels like, read up on the book now before it hits screens.

The Scorpio Races by Maggie Stiefvater

In The Scorpio Races, the legend of the water horse comes to life. Every year in island of Thisby, there's a series of races between water horses and land horses with the most dire of consequences. Winning brings the victorious rider fame and fortune, but losing the race means death. Nineteen year-old Sean Kendrick is the defending champion. He's going up against (among others) Puck Connolly, a first-time racer (and the first-ever girl racer) who never asked to be here and doesn't know what to expect whe

n she races to save her farm.

Maggie Stiefvater's young adult book (which appeared on several "Best Of" lists for 2011) is being adapted to film with a script written by screenwriter and playwright Jack Thorne, who wrote the stage adaptation of Let the Right One In. David Katzenberg and Seth Grahame-Smith’s KatzSmith Productions is producing the project. The film is still in development stages.

Buddy Holly Is Alive and Well on Ganymede by Bradley Denton

If there's one book in this roundup that wins the "It's About Time!" award, it's Buddy Holly Is Alive and Well on Ganymede by Bradley Denton. First written in 1991, the story is about video salesman Oliver Vale, who was conceived in the backseat of a car on the day that Buddy Holly died. Ollie V. turns on the TV one day to find that Buddy Holly is on every single channel, playing guitar while standing in a bubble on the surface of Ganymede, Jupiter's largest moon. Even more unbelievably, Holly advises viewers to contact Oliver Vale for more information. Needless to say, Oliver finds himself the center of worldwide attention and being chased down by shady government operatives, televangelists, aliens and cyborgs. Did I forget to mention this is a comedic novel?

Denton's charmingly oddball gonzo story is being made into a movie directed and written by Robert Rugan. The film adaptation will star Jon Heder (Napoleon Dynamite) as Oliver Vale, just your ordinary average geek who becomes the center of worldwide attention when Buddy Holly apparently comes back from the dead to sing on Jupiter's moon.