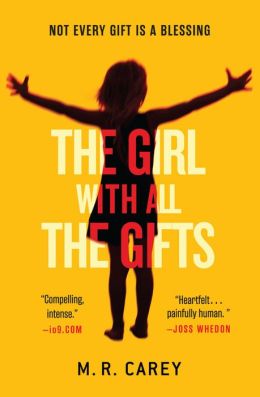 News items about upcoming films and television shows being based on existing science fiction, fantasy and horror books are becoming more and more prevalent. Need proof? Besides all the other articles in this series, here's another roundup of books that are coming to a screen near you.

The Girl With All The Gifts by M.R. Carey

The Girl With All the Gifts is about a girl named Melanie who is confined to a cell. She is deemed dangerous by the adults that surround her, particularly the military personnel, who strap her to a wheelchair so they can take her to class every day. Melanie is unlike the other of her kind. Melanie is an intelligent zombie.

Rarely does a film adaptation get announced when it already has so much of the cast and crew identified. This is one of those films. It also gets a name change. The film will go by the name She Who Brings Gifts and it will star Gemma Arterton, Paddy Considine and Glenn Close. Colm McCarthy will direct. Perhaps the most promising part of the adaptation is that author Mike Carey will write the screenplay. Shooting has already begun.

Ready Player One by Ernest Cline

Anyone who considers themselves a geek would do well to check out Ernest Cline's Ready Player One. It's a novel that taps into geek culture in a big way. It takes place in the year 2044, where anyone can jack into a virtual utopia, like its main protagonist, Wade Watts. Within the virtual world is a series of puzzles by its creator that lead to millions of dollars to the one who can solve them. The book is riddled with pop culture references to the "nostalgic" days of the 20th century, especially references to film and video games.

No cast has been chosen yet, but who better to lead a film about late-20th-century videogames than the ma

ster of the era's blockbuster, Steven Spielberg? Spielberg (Jaws, E.T., Close Encounters of the Third Kind) will helm the film which will be based on a script written by Zak Penn (X-Men 2, X-Men: Last Stand, and the upcoming Pacific Rim 2).

Horrorstör is a unique supernatural mystery novel written by Grady Hendrix. Unlike conventional horror stories, it takes place in a furniture store. Orsk furniture is the Ikea-like furniture store in Cleveland, Ohio, where employees arrive every morning to find the store in utter disarray. The store cameras reveal nothing about who is trashing the store, so a small group of fearless employees agree to work the night shift. When they do, they encounter unspeakable horrors.

If you like lighthearted horror...or furniture stores...you're in luck! Horrorstör is being adapted as a television series. Rights were acquired for development by The Jackal Group, a co-venture between Fox Networks Group and Gail Berman, who spearheaded the development of the successful Buffy the Vampire Slayer television series, another property that mixes humor and horror.

The School for Good and Evil by Soman Chainani

Originally aimed at young adult readers, The School for Good and Evil is the story of two best fiends who are plucked out of their village to attend a special school whose graduates can be part of fairy tales—as either good characters or evil ones. The kind-hearted Sophie seems to be destined for the School of Good (where Cinderella, Rapunzel, and Snow White graduated), while the black-frocked Agatha seems more suited for the School of Evil. However, the girls find themselves in what appears to be the worst school for them—and perhaps intentionally by someone with ulterior motives.

Author Soman Chainani has been tapped to co-write the sc

reenplay of Universal's film adaptation of his book The School for Good and Evil along with Malia Scotch Marmo, screenwriter of other speculative kind–friendly films Hook and Madeline. Chainani has stated that the film will be a little bit of a departure from the book in that the new storytelling medium provides new and interesting ways to present the story to the viewer. If all turns out well, this could mean good things for a possible adaptation of the book's sequels.

The Three-Body Problem by Liu Cixin

The Three-Body Problem was widely hailed upon its release last year, not just because it was the first time English-speaking readers could experience the work of Chinese writing sensation Liu Cixin, but also because it's plain good. It's about the attempts of a secret military project to contact an alien intelligence by sending signals into space. The good news is that contact is made. The bad news is that the desperate alien race that picked up the signal is dying and sees Earth as a viable target for conquest. Set against the backdrop of China's Cultural Revolution, it shows how humanity becomes divided on whether news of alien contact spells progress or doom.

Not much is known about the adaptation at this point. It was, in fact, reported more as a side note that China Film Group picked up three stories by Liu Cixin so they can turn them into blockbuster films. Those other stories are The Wandering Earth, The Era of the Supernova, and Micro Era.