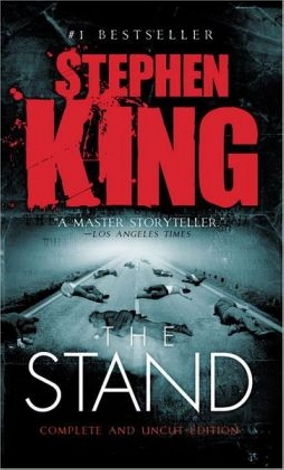 It's probably obvious that prolific best-selling authors have a greater chance of seeing their work adapted for television and film. And you probably know that prolific author Stephen King has already had a large handful of his novels and stories adapted. What you might not guess is that this particular well has not yet run dry and even when it does, Hollywood is perfectly content with producing second adaptations of the horror master’s work. This is evidenced by this latest roundup of speculative fiction adaptations, which focuses on upcoming films based on the works of Stephen King.

In The Stand, Stephen King takes on the apocalypse and the result is nothing short of epic. To give you an idea of the devastation, it starts with the end of the world brought about by a laboratory accident that unleashed a superdeadly plague. Less than one half of one percent are immune and survive, but the world in which they live is a vast wasteland, eliciting chills in readers as they travel through once densely populated areas that now look like urban graveyards. Against this backdrop, a story of good vs. evil plays out. The good is represented by a small band of survivors, led by Stu Redman, who go up against evil embodied in the persona of Randall Flagg, a charismatic charmer who rules his makeshift empire in Las Vegas, the Sin City.

The Stand, written in 1978 (with an extended version released in 1990), has been adapted before. Most notably as a 1994 television miniseries starring Gary Sinise (as Stu Redman), Jamey Sheridan (as Flagg), Molly Ringwald, Ruby Dee (as the wise woman through whom God directs our heroes to fight the devil), and Matt Frewer as King's wild card character, Trashcan Man. It also found new life as a comic book miniseries in 2008. The book even inspired the rock group The Alarm to record a tribute song called "The Stand" in 1983.

But that was not enough. The Stand is being adapted again, this time as a feature film. Josh Boone (the director behind the recent big screen adaptation of the John Green's teenage cancer patient romance, The Fault in Our Stars) is set to direct the film, which is being planned as a three-hour, R-rated film with an A-List cast. That's the plan anyway. No stars have yet been attached to the project since it's still in its early stages.

One of my favorite reading memories is Stephen King's 1986 horror novel, simply titled It. The story is about seven children who become friends, fight and defeat a terrible creature, and return to their hometown 27 years later when that creature who they thought they defeated returns. The gripping narrative alternates between the fearless childhood friends in the 1950s (who call themselves the Losers Club) and the doubting, jaded adults they've become in the 1980s. One of the remarkable things about this novel is not just the story of the creature (who manifests itself as a creepy clown named Pennywise), but also how remarkably real the characters seem. King is in top form here.

King's horror classic is another one that's been adapted before. In the 1990 television miniseries, the creature named Pennywise was played by Tim Curry and he terrorized the likes of children (Jonathan Brandis, Seth Green) and their older counterparts (Richard Thomas, Annette O'Toole, John Ritter, Harry Anderson, Tim Reid).

While the small budget television miniseries was a bit corny in places, the upcoming film adaptation promises bigger and better things. Firstly, it's being planned as two films, with one focusing on the children and the other focusing on the adults. Secondly, the director attached to the project is Cary Fukunaga, the acclaimed director of the wildly popular HBO series, True Detective. That's a good sign. Here's hoping that the film will do the book justice. Evil clowns are always a good starting point.

el. It's about a woman named Jessie Burlingame who accidentally kills her aggressive husband while handcuffed to the bed as part of a bondage game, leaving no hope of escaping the remote cabin where they were staying. Helpless with nowhere to go, Jessie begins to see things that may or may not be real. Is it tied to the guilt she has over the relationship with her father? Is it just the voices inside her head, or is Jessie going truly crazy? Part of the fun in finding out is how King keeps readers interested throughout the story.

All of this sounds like it has the claustrophobic markings of a powerful story, much like another King adaptation, Misery. Hopefully the upcoming film adaptation of Gerald's Game will be just as good. Oculus director Mike Flanagan, a fan of King's 1992 novel, is helming the project. Flanagan himself co-wrote the script along with his writing partner, Jeff Howard.

If you've ever wondered whether Stephen King ever wrote a zombie novel, the answer is yes. It's called Cell, and it's a modern day take on a classic horror sub-genre that also serves as a cautionary tale. You may not recognize it as such, if only because of the unique way in which the zombie apocalypse comes about. King uses the ubiquity of cellphones as the attack vector. A mysterious signal is broadcast to all cellphones and turns the majority of humanity into vicious creatures. All of this is seen through the driving narrative of a New England artist named Clayton Riddell who is struggling to reunite with his young son when the apocalypse hits, and he teams up with a middle-age man named Tom McCourt and a teenager named Alice Maxwell.

In production since 2008, the film adaptation of King's 2006 novel is finally hitting theaters later this year (in September). It stars John Cusack as Clayton, Samuel L. Jackson as Tom, and Isabelle Fuhrm

an as Alice. The film is directed by Tod Williams, who directed Paranormal Activity 2.

Stephen King does time travel in a story that asks: "What would happen if you could go back in time and stop the assassination of John F. Kennedy?" (King burdened his protagonist with a similar dilemma in The Dead Zone, except there it wasn't via time travel, it was by a man's ability to see into the future.) In 11/22/63, a man named Jake is transported back to 1958, years before the Lee Harvey Oswald's succeeded in his fateful assassination. But is it enough time for Jake to change history?

Bad Robot, the production company of J.J. Abrams (the new Sci-Fi Overlord of both the Star Trek and Star Wars franchises), acquired the rights to adapt King's time travel book for television.

Fans of King's most epic series, The Dark Tower, will be pleased to learn that at least the first novel was optioned for film by noted director Ron Howard. Unfortunately it experienced several starts and stops and is now stalled. Time will tell if this ever sees the light of day.

...And the Ones That Didn't

That covers Stephen King's upcoming speculative fiction novel adaptations. Stay tuned next week for a look at King's shorter fiction that is making the mighty leap off of the printed page!