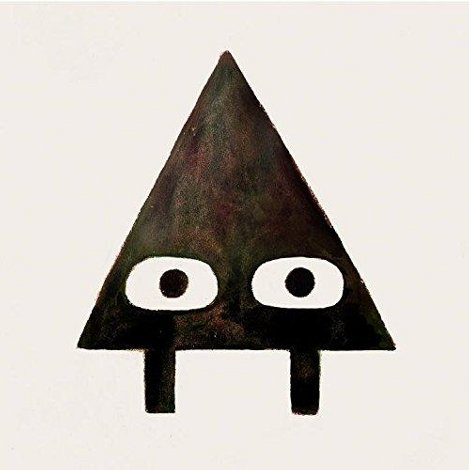 Last year, author Mac Barnett and illustrator Jon Klassen kicked off a new picture-book trilogy, called the Shape trilogy. It all began with Triangle. On shelves this year, as of just last month, is Square. Last in the series will be Circle, coming in 2019.

I sat down today to write about the new book, Square, a book I like very much. (I love how the Kirkus review describes it as an “ontological poser” in “stripped-down geometric garb.”) But — after recently hearing a disparaging comment from an adult reader about Triangle, also a book I like very much — I fell into an internet rabbit hole of reader-reviews. I’m talking about that vast and impassioned land called Goodreads. I had a feeling that more than one reader felt just as disappointed by Triangle for similar reasons, and a visit to Goodreads pretty much proved that point. (To be sure, it has many fans, too.)

Here’s what I’m talking about: In Triangle, two characters play “sneaky tricks” on each other. Triangle is the first to do so. He heads out the triangle-shaped door of his triangle-shaped house to trick Square, who lives in a land of “big squares and medium squares and small squares.” Triangle’s sneaky trick is to walk up to Square’s door and hiss like a snake. Square is afraid of snakes, you see, and is frightened by this.

When Square discovers he’s been pranked, he chases Triangle back to his home. Because he’s shaped like a square, he gets stuck in Triangle’s door frame. For this reason, he blocks the light in Triangle’s home. Triangle is afraid of the dark, and it’s now his turn to be frightened. “I know you are afraid of the dark,” laughs Square. “Now I have played a sneaky trick on you! You see, Triangle, this was my plan all along.” On the last page of the book, Barnett asks readers: “But do you really believe him?”

So, what are the complaints I’ve heard and read (not just at Goodreads) from parents and even some educators about this story?

This has been on my mind all week. On the one hand, it’s not surprising. If you in work in any way in the field of children’s literature or education or librarianship, you repeatedly run into this notion that children’s books should teach something. See this recent tweet from author Julie Falatko.

But why, in particular, are some adults uncomfortable with books that possess a joy in mischief for mischief’s sake? This is, after all, a book about pranking. In this 2016 article, in fact, Barnett says, “The book is all about sneaky tricks.” And Klassen talks about the necessity of illustrating Triangle’s eyes low on his body, given the restraints of his shape, and how this immediately makes him look “shifty” and made him an insta-“trickster.” It’s important that Klassen uses the word trickster there. Children love to read about such characters, and there’s a long tradition of trickster tales in children’s literature.

I’ve written here before at Kirkus (in this 2013 post) about how children love to live vicariously through impish characters and how it won’t lead them to a life of crime. (It’s interesting that Klassen came up in that piece, too.) So, I’ll not repeat myself. But what I’ve been thinking about all week is the fact that many adults have no problem at all with children passively watching prank-pulling in the likes of Tom and Jerry or Looney Tunes. There’s no fretting over episodes involving Wile E. Coyote or Road Runner. (And those dudes are HARD-CORE.) But they get a bit twitchy when it shows up in their children’s books.

Why is this? Perhaps it is because, if the parent is reading the book to the child, they have become an active participant and are uncomfortably giving what they deem to be an explicit approval of the behavior.

Or maybe, just maybe, we sometimes treat reading as a sacred time — this can easily happen when we designate only small, and rare, windows of time to share books with our children — and we don’t want it marred by mischievous behavior. This is reading-as-church, if you will, and we lean towards allowing only the more angelic behavior. This brings to my mind author Jon Scieszka’s platform as the inaugural National Ambassador of Young People’s Literature (2008 to 2009), during which he asked adults to stop “tyrannizing” children by saying everybody has to love reading or that “reading is magic.” In an interview I did with him over a decade ago, he said that we adults need to …

“… relax about the whole thing. A little more enjoyment of the reading itself, and a lot less testing and grading. Accepting a wider range of texts (like humor, non-fiction, graphic novels, war stories . . .) would be a good way to start adding to kids’ enjoyment. Reading doesn’t have to be everyone’s favorite activity.”

And reading doesn’t have to be sacred. The more we read with our children, the more open we may become to all kinds of stories — and certainly less rigid about the stories of mischief that utterly delight children. Or, as my twelve-year-old told me, “sometimes a story can just be funny.”

As for Barnett’s open-ended question at the book’s close — the kind that leaves some adults readers craving resolution — I’ll quote musician Neko Case (I can’t help it; I’ve been wearing out her new album all week): “I miss the smell of mystery / Reverb leaking outta tavern doors / And not knowing how the sounds were made.” I love that Barnett leaves space for readers’ thoughts.

So, happy reading. Happy reading all kinds of books. Happy reading so often with your children that it becomes a little less hallowed and a lot more vulnerable and fun and profane.

p.s. As for Triangle and the sprawling, feverish Land of Goodreads, “Kaethe” wins best five-star review.