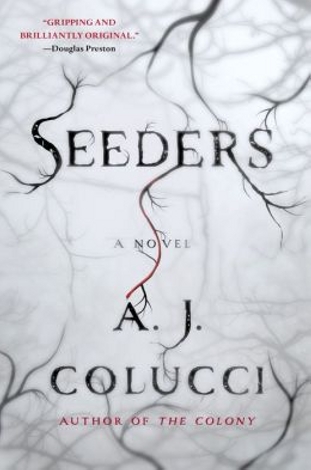 With the image of science fiction being something that predominantly includes spaceships and aliens, it's easy to forget that astronomy is only one science that falls under the enormous sci-fi umbrella. Books whose plots rest largely on any science at all may qualify as science fiction. For example, take ecology, the branch of biology that deals with the relations of organisms to one another and to their physical surroundings. Science fiction has a long history of telling ecological science fiction stories. Some of the more well-known ones are Frank Herbert's Dune, Kim Stanley Robinson's Red Mars, and Margaret Atwood's MaddAddam trilogy.

Seeders by A. J. Colucci

Some ecological science fiction deals directly with plant life. That's certainly the case with the science fiction thriller Seeders by A. J. Colucci. Seeders opens with the mysterious death of George Brookes, a brilliant but reclusive plant biologist who lived on a remote Canadian island. When the heirs to his estate arrive on the island—including Brookes' daughter Isabelle, her teenage children, and Brookes' protégée, Jules Beecher, who is a pioneer in plant neurobiology—they slowly begin to realize that something is oddly amiss. Jules begins pouring over Brookes' journals and learns that Brookes made a huge discovery: He figured out a way to foster communication between plants and humans. Not long afterwards, the visitors, trapped on the island for two weeks until the next supply boat arrives, experience weird and violent events. Isabelle begins to suspect that her father may have been involved in something far more sinister than she ever imagined.

Colucci based this science fiction on fact. Many of the ideas presented in the Seeders come from extensive research conducted by the author prior to writing the book. This adds to the believability (and scariness) of an already entertaining story.

The Little Green Book of Chairman Rahma by Brian Herbert

Some ecological issues are often surrounded by politics. That association is not lost on Brian Herbert (son of science fiction writer and Dune author Frank Herbert). Herbert's new novel The Little Green Book of Chairman Rahma, in fact, involves a revolution that has taken over the government of the United States. Eco-friendly ideas, extrapolated to religious levels, have saved the world from pollution by outlawing it and reversing its effects. This is the Green world that everyone hoped for. But no solution comes without a price and no revolution comes without its radical elements. The new government put in place to realize our Green future is nothing but a dictatorship led by a man named Chairman Rahma Popal. Chairman Rahma's power is driven by altruistic goals, even when realized through his environmental police force known as Greenpol. But that altruism isn't as absolute as it appears: Extremist parties move about within the government, corporations are fighting back by developing new weapons, foreign factions are beginning to influence America's power, and even Rahma's censorship can't hide the reports about strange mutants that are beginning to appear after a bio-technological accident. Needless to say, our Green future is far from perfect.

If ecological issues are more than a passing interest to you, then the book you'll want on your shelf is Green Planets edited by Gerry Canavan & Kim Stanley R

obinson. This book is not a novel at all. It's a collection of illuminating and thought-provoking essays that look at the relationship between ecology and science fiction. More specifically, it focuses on eco-apocalypses in sci-fi. What's an eco-apocalypse? Science fiction often depicts a future where our natural environment is affected by the rapid increase in technology. These visions are often (but not always) framed as an apocalypse. An eco-apocalypse is an apocalypse brought about by ecological means, for example climate changes due to global warming. Green Planets examines how science fiction writers have been dealing with the ecological issues that are found in today's headlines by extrapolating them to a future setting where they tell their stories. Editors Canavan & Robinson have assembled a great collection of brain candy essays for you to explore. (As many science fiction readers already know, Robinson himself is well-versed in ecological matters. Several of his books deal with ecological themes. Besides the aforementioned Red Mars and its sequels, there's Antarctica, 2312 and Shaman.)

As I am working my way through the Gardner Dozois anthology The Year's Best Science Fiction: Thirty-First Annual Collection, I came across a novella that fits under the heading ecological science fiction quite nicely. That story is "Rock of Ages" by Jay Lake. The primary plot is about a spy who tries to thwart the attempts of a political faction to destroy the city of Seattle by hurling an asteroid at it from space. This story has many great things going for it, an example of which is the Green future in which it is set. One of the many wonderfully drawn complexities of the story is that, just like any political party, there is not just one side to being green. The "Soft" Greens uphold the belief that mankind can live at one with nature. The "Hard" Greens believe that the only way to save the Earth is to remove mankind from its surface; their vision includes the propagation of humanity via a much smaller seed population of humans living in space. Lake has written a fantastic story that is filled with gripping drama, excellent worldbuilding, and good old-fashioned sense of wonder.