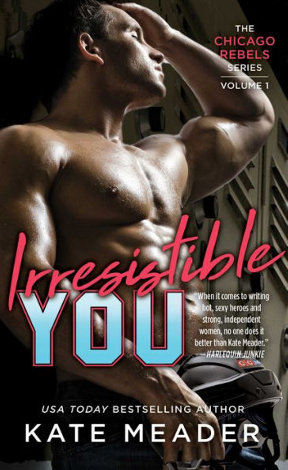 It’s another week for catching up on notable books I read at the end of last year.

I’m a Kate Meader fan and I finally had the chance to listen to the first title in her sexy hockey series, the Chicago Rebels. Irresistible You came out last August, but I got my hands on the audio in December (thank you Tantor).

This was on the amazon page for the title as “from the author” and is a great way to describe it:

“I'm so excited to tell you all about IRRESISTIBLE YOU, the first book in my new hockey series, the Chicago Rebels about three estranged sisters who inherit their late father's failing hockey franchise. Eldest daughter, Harper, expected to rule the Rebels outright and is none too pleased at having to share with the half-sisters she hardly knows. But then her father always had a twisted sense of humor.

This ice queen needs a good melting—and who better than Remy DuPre, a laid-back Cajun center who knows how to burn things up both on and off the ice? Fans of Susan Elizabeth Phillips' Chicago Stars and Rachel Gibson's Chinooks Hockey will love this stubborn couple and their funny, sexy, enemies-to-lovers romance.”

Agreed, agreed, agreed. Meader takes cool over-arching concepts (three 1/2 sisters who are practically estranged inherit a hockey team), whips up the conflict (family conflict, main protagonist romantic conflicts, woman-as-sports-executive conflict, etc.) and weaves them all together beautifully, in believable ways that make strong, kick-ass women believable, but also vulnerable in ways they have no control over. Oh, and umm, the sexual and romantic tension is taut and sizzling. Just the way we like it.

If you haven’t discovered the series yet, you’ll want to pick it up. Especially if you like sports-themed romances! And yes, if you like the Chicago Stars or the Seattle Chinooks (all hail Susan Elizabeth Phillips and Rachel Gibson!) my guess is you’ll love Meader.

(Now to get my hands on sister Isobel’s story, So Over You, which came out in December. Sister Violet’s book, Hooked On You, releases in May. And there’s a m/m title, Undone By You, which features the gay Rebels’ GM and their star defenseman, Cade Burnett.)

My other awesome discovery in December/January? Lucy Parker!

I’d heard of her and that she was great, and the storylines certainly piqued my attention: the series is London Celebrities, set in the dramatic world of London theater. Actors, actresses, directors, nosy paparazzi that is both dreaded and manipulated…And some of the wittiest, smartest dialogue to come down the romance pike in years.

Book 1, Act Like It, features famous actor and bad boy Richard Troy and cast mate Lanie Graham, who are roped into a “for the cameras” relationship that becomes something real. Book 2, Pretty Face, stars actress Lily Lamprey, who tries very hard not to use her famous contacts for favors, and director Luc Savage, who can barely take the sexy beauty seriously, until he *finally* lets her audition.

These books are romance catnip, with crazy sexual tension; surly heroes who hide their hearts of gold under prickly exteriors; gorgeous leading ladies who would like the world to see them as more than sex objects, thank you; and supporting casts who are uniquely quirky, fiercely protective, and just what the main characters need to make them beyond cookie cutter and vulnerable in ways that break down in just the right ways for them to fit perfectly with their soul mate, if they can just figure out how to get there.

I also snuck in two more titles from Louise Penny’s Inspector Gamache series, A Rule Against Murder and Bury Your Dead. Mesmerizing reads, as are all Gamache mysteries. I still have a few to get through before her next one comes out, which will likely be late this year.

Thanks to HarperAudio for the Lucy Parker titles and to Tantor for Irrestible You. Pippa Jayne narrates all of the Chicago Rebels titles and she did a terrific job with this one, though occasionally Remy’s cajun accent went slightly astray. (As a french speaker, I tend to cringe a lot with french and french-based accents, and I didn’t ever cringe on this one. I did however sometimes feel like the character sounded something other than bayou. Overall, though, it’s a tough accent and it never felt so bad it was distracting. So bravo!) The rest was smooth sailing and a really stellar job.

Since I basically listened to Act Like It and Pretty Face back-to-back, breathlessly, I’m glad the narrators were different, though both were excellent. (They were also both involved in the excellent narration of one of my favorite books & audiobooks last year, Last Christmas in Paris.) Morag Sims, narrator of Pretty Face, might have had a bit more of a challenge, since Lily can be described as a sex kitten with a voice to match, but also whip smart. Both of these audiobooks were a joy to listen to, for both content and audio performance.

What does February hold for you? I have the fabulous Melanie Benjamin to look forward to—The Girls In The Picture came out in January, and it sounds delicious!

“From the New York Times bestselling author of The Swans of Fifth Avenue and The Aviator’s Wife, a fascinating novel of the friendship and creative partnership between two of Hollywood’s earliest female legends—screenwriter Frances Marion and superstar Mary Pickford.”

And I have the audio for Jojo Moyes Still Me, which I can’t wait to dive into. And you?