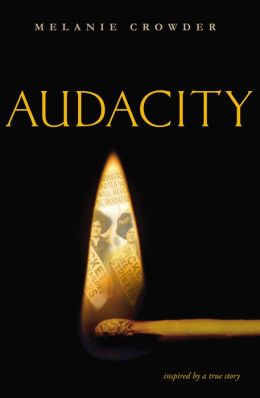 As you probably know, March is Women’s History Month. To celebrate, let’s take a look at some teen titles that are based on the REAL LIVES of REAL WOMEN:

Audacity, by Melanie CrowderThis is a verse novel about the adolescence and young adulthood of Clara Lemlich, a Jewish girl who immigrated to the United States from Russia in order to escape the pograms. From reading Russian poetry against her father’s wishes to secretly enrolling in school, from working to improve working conditions in New York City to women’s suffrage; Clara starts fighting for fairness and equality, for her own rights and the rights of others on page one, and keeps going right on through the Historical Note and the rest of the extensive back matter. It’s inspiring, empowering, beautifully written, and, yes, important: DO NOT, DO NOT, DO NOT MISS IT.

There are lots and lots of stories about girls who pretend to be boys in order to be pirates, outlaws, highwaymen, and soldiers, but this one—about Sarah Edmonds, a Canadian girl who joins the Union Army to escape a terrible home life and eventually becomes the only known woman to receive a soldiers’ pension—is a special stand-out in terms of Moss’ descriptions of Civil War–era medicine, her depiction of daily life in Army camps, and all of the other facts and historical nuggets that showcase the extensive research she did to write this book. (At times, actually, those details come so fast and furious that they come close to overwhelming the story, but they’re so interesting that they get a pass.)

Firefly Letters: A Suffragette’s Journey to Cuba, by Margarita Engle

I’ve been wanting to read this book ever since I included it in a round-up about books featuring the Women’s Suffrage Movement. Based heavily on the diaries and letters of Swedish women’s rights advocate Fredrika Bremer, it’s a verse novel imagining of her life-changing trip to Cuba, as seen from three distinctly different perspectives. Starred review from Kirkus AND a 2011 Pura Belpre Honor.

The Year We Were Famous, by Carole Estby Dagg

This is the story of Clara and Helga Estby’s 1896 walk from Spokane, Washington, to New York City, an adventure they undertook in an attempt to win the money to save their family farm. Adventures and women’s suffrage and period details and mother-daughter stuff and Big Life Decisions, this one sounds like a barrel of fun. Also! The preface includes the line, “Because of the way our adventure ended, we couldn’t talk about it afterward,” so obviously now I’ve GOT to know what she’s talking about!

While these certainly aren’t the only books that fit the bill, I will admit to being surprised that I didn’t find more. But the vast majority of Based on a True Story YA books that I know about—at least the ones with female protagonists—are either about the Brontë sisters, Jane Austen, or Mary Shelley. Interesting subjects all, but I’m more interested in women who are new to me. Any suggestions?