Revenge is Served Lukewarm in Lili Peloquin's 'The Innocents' 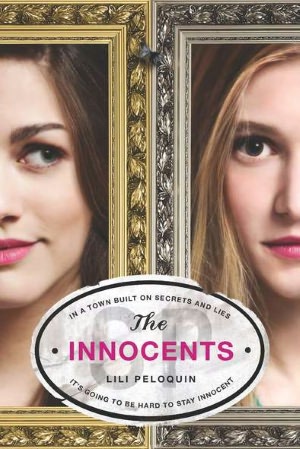 As some of you may already know, I’m a recent Revenge convert*. So picking up Lili Peloquin’s The Innocents—described as “a saga of nail-biting drama, breathless romance, and gothic mystery”—was a no-brainer. Like Revenge, it’s about a glamorous, super-rich community that has a rotten underbelly full of secrets and lies. Unlike Revenge, it’s pretty ho-hum.

Shortly after her divorce, Alice and Charlotte “Charlie” Flaherty’s mother has a whirlwind romance with zillionaire architect (and recent widower) Richard Flood the Third, and gets re-married. The girls are dragged from their modest apartment in Cambridge to ultra-moneyed Serenity Point, Connecticut, where they’ll spend the summer before becoming the newest students at an exclusive prep school in Vermont. Alice and Charlie are expecting an uncomfortable summer full of stilted conversation and awkward moments, but they’re willing to put up with it all for the sake of their mother’s happiness. Little do they know, they’re about to become two of the key players in a drama that began far earlier than either one imagines...

See, it sounds pretty enticing, right? It really does. But while the writing itself is actually really decent, Razorbill’s packaging of The Innocents is the most exciting thing about the book. The drama isn’t particularly dramatic—more angst than action—and the shocking behavior of the characters looks almost wholesome compared to what went on in Beverly Hills, 90210 over 20 years ago. While my love of Revenge made me eager to pick this book up, The Innocents actually reminded me far more—in a pale comparison sort of way—of these other classics:

Rebecca: Alice and Charlie’s new stepfather isn’t just a recent widower. His teenage daughter Camilla—who looked remarkably like Alice—died a year ago as well. It isn’t long before Alice realizes that, despite the plethora of other options, he’s settled her into his dead daughter’s bedroom. Which is weird. And then, there’s the mutual attraction between Alice and Tommy, Camilla’s long-time boyfriend: Does he like her for her, or does he like her because she looks like his dead girlfriend?

The Great Gatsby and Tess of the D’Urbervilles: Both books are mentioned again and again; as there are some parallels in imagery and storyline, it’s rather hard to avoid comparison. In terms of pure entertainment value, though, Gatsby and Tess win hands down.

David Lynch’s Twin Peaks: Like Laura Palmer, Camilla led a double life. Like Laura Palmer, Camilla’s peers are affected by her behavior and her closely-guarded secrets long after her death. Like Laura Palmer, adults thought Camilla was beautiful, virginal and happy—she was, after all, an athlete, volunteer and tutor—but she was secretly promiscuous, self-destructive and had a heavy drug habit. All of that aside, it was this parallel that made me plotz: both Laura Palmer and Camilla Flood specifically volunteered for the Meals on Wheels program and, in both cases, a client on the route makes a complaint about creamed corn. WEIRD! As in the previous examples, Twin Peaks wipes the floor with this book in terms of drama and intrigue.

By the time I finished The Innocents, I’d developed some curiosity about where the story will go in the next installment... but those vaguely positive feelings were tempered by the fact that I probably wouldn’t have even finished the book if I hadn’t been planning on reviewing it. So I’ll likely forgo the rest of the series in favor of watching more Revenge.

*For the uninitiated, Revenge is an ABC nighttime soap that’s basically The Count of Monte Cristo set in the Hamptons. It’s full of cattiness, dramatic slaps, double-crosses and verbal sparring—and it’s totally, totally addictive. Also, the heroine’s sidekick is a billionaire hacker with a penchant for amazing outfits. Nolan Ross, I LOVE YOU AND YOUR POPPED COLLARS.