Revisiting the ‘Crime of the (Last) Century’ 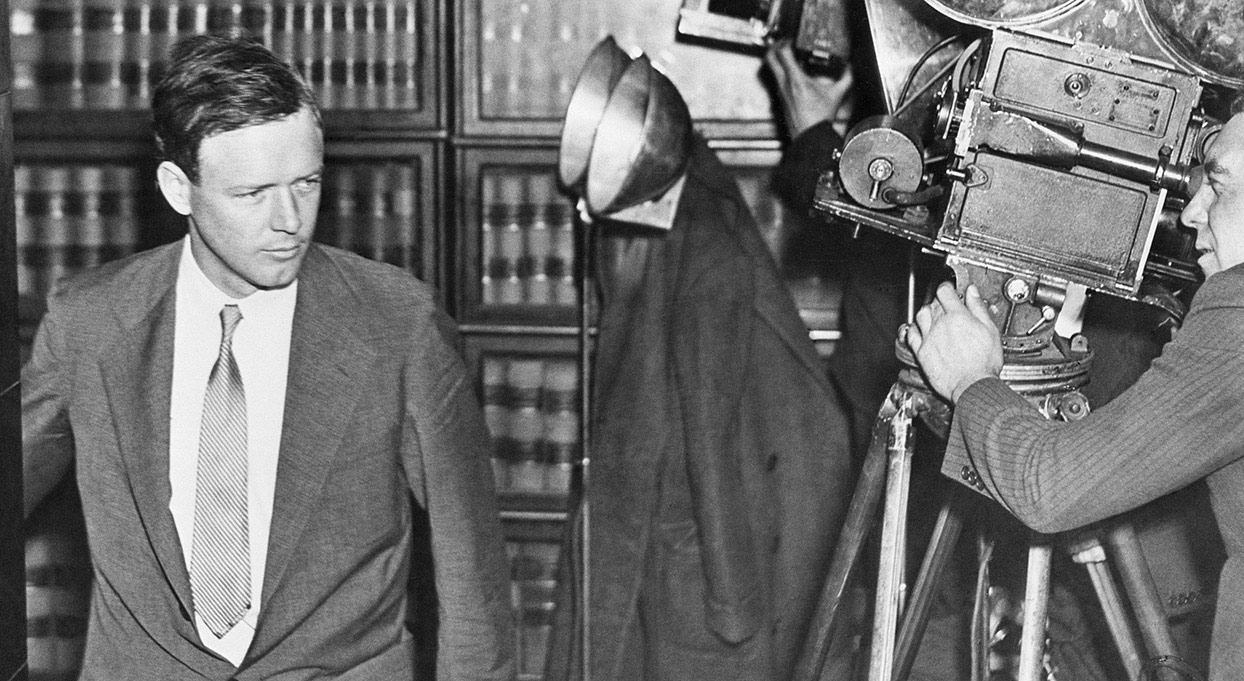 Lindbergh at the kidnapper's trial. Photo from Bettmann/Getty Images

Charles Lindbergh was famous for three things, author Pamela Ryder tells me. First, for crossing the Atlantic by dead reckoning navigation in what was essentially “a flying gas tank.” His airplane’s seat was just a wicker chair. He carried no provisions and stayed awake for the 33½ hours of his journey from New York to Paris “by flying low enough to let the surf splash on his face.” The second incident that garnered almost hysterical public interest was the kidnapping of Lindbergh’s 20-month-old son at a time when he and his wife, Anne Morrow Lindbergh, were America’s most beloved celebrity couple. (A newspaper declared that it was “almost as if Lindbergh walked on water instead of flying on it,” Ryder says.) And in later years, he was known for his anti-Semitism, Nazi sympathies, and as the leading spokesman of the America First Committee.

I always knew the aviator’s name, knew vaguely what he had done, and that classic novels such as Agatha Christie’s Murder on the Orient Express were inspired by the Lindbergh baby kidnapping. But I’ve never read a book quite like Correction of Drift (University of Alabama Press, 2008), Ryder’s “novel in stories,” that hypnotically immerses readers in the details of the kidnapping and its effects on all involved—from the Lindberghs to the crazed public. Ryder writes from the perspective of the kidnappers, from that of Lindbergh and his wife, and even their maid, Violet Sharp, who, Ryder notes, “was badgered by the police to the point where she committed suicide by drinking silver polish.” Correction of Drift doesn’t delve into Lindbergh’s fascist beliefs—instead, it probes the conflicting emotions and confusion surrounding this very personal, and at the same time, public tragedy. Knowledge of the aviator’s political views adds an extra dimension to what is already a disturbingly complicated story.

Ryder’s style is sui generis. The prose is so distilled you feel as though you’re reading poetry; she layers detail upon detail until you feel in your bones what the characters are feeling and comprehend the nuts and bolts of the incident without realizing that you’ve been told them. The chapter “Dreams, Sightings, Expressions of Sympathy,” opens with two paragraphs, each just a sentence long, but capturing the sensational nature of the crime and the national interest it commanded, as well as the horrific specifics:

“What arrives, arrives in sacks: telegrams, postcards, letters largely unsolicited; notes and parcels packed in bags of canvas of a sailcloth weight, roped and grommetted at the neck.

“Unlike the one of gunny, the kind used for the containment of the boy, for the reduction of struggle.”

This is followed by: “The gunny being looser in its weave, allowing the exchange of air, permitting inhalation of bits of hemp found inside the nose and mouth. Unlike the strands found along the windowsill: wool snagged from what might have been someone’s trouser seat, and cotton from the diaper or the footed sleeping suit.”

It was a conversation with her mailman, whose uncle had been the Lindbergh’s gardener, that drew Ryder to the story of the kidnapping. The gardener had been given the Lindbergh baby’s silver teether as a gift. After the child’s decomposed corpse was found on the property, the police asked for the teether back, since no other dental records existed. Ryder knew that she had found her story when she heard about the baby’s corpse and marks on a silver teether.

She deploys those kinds of details, both real and imagined, to devastating effect throughout the novel, like this standalone paragraph:

“The sleeping suit that the boy had been wearing is returned by mail, intact, except for a lose thread at the sleeve and a tear at the neck.”

Or of Lindbergh, in the aftermath of the kidnapping: “He does not mention [to his wife] that the crib has been dismantled and crated and how fine it will be to start with everything new and fresh.”

I first came across Ryder’s work in The Brooklyn Rail,which published “Two Excerpts from a Novel in Progress,” excerpts from the novel The Lists of Billy the Kid. Initially, I couldn’t tell whether I was reading a compendium of accounts written during Billy the Kid’s era or some kind of museum catalogue or literary cabinet of curiosities consisting of items of interest related to the life of the famous gunslinger. It took me a while to be sure that I was, in fact, reading contemporary fiction that was highly inventive and meticulously constructed.

Renewing interest in Charles Lindbergh, HBO has just released its six-part miniseries, The Plot Against America, based on the Philip Roth alternate-history novel of the same name, in the which the Nazi sympathizer aviator becomes president in 1940.